When it comes to the Vive, walking is believing

The Vive VR headset from HTC and Valve is one of the most immersive virtual-reality headsets out there – as long as you’re standing up when you use it.
Published 13 January 2016, 17:16 EST

I’m in the cockpit of a spaceplane, a control stick in my right hand and a throttle in my left. All around me, dotting the space between asteroids, are the explosions of my enemies. Their fiery destruction is recorded by the computer screens surrounding me, bathing me in a serene glow that reflects off the canopy over my head. In short, I’m in my own personal, impossible heaven. So why does it feel so … conventional?

The Vive Pre is the updated version of the original HTC Re Vive VR headset I tested nearly a year ago, the device that singlehandedly made me a VR believer by bringing me almost to the brink of tears at MWC 2015. The Pre edition is sleeker and more lightweight, with a single wire connecting it to a computer instead of the unwieldy cable harness of the first-generation Vive. Its accessories have also been upgraded: its wall-mounted sensors are now simple boxes with standard tripod mounts, the handheld controllers super-lightweight, more ergonomic and wireless to boot. These improvements make the Vive Pre much more accessible as a consumer product, and presumably easier to sell at the device’s rumored price point.

But barring some insane exclusive (Half Life 3, anyone?), selling the Vive is bound to be anything but easy for HTC and partner Valve. For all its potential to redefine everything about the way we use computers, virtual reality is an incredibly difficult product to pitch to normal consumers. Like the smartwatch, VR is something you have to experience firsthand to “get.” Even then, it’s no guaranteed slam-dunk: my first outing with the Oculus Rift two years ago was interesting and fun, but it certainly wasn’t transformative. The same goes for my time with Google Cardboard and Samsung VR, and lower-cost computer options like the 3Glasses D2. Fun, yes – but ultimately forgettable.

The Vive is different for a number of reasons, but one really stands out: it’s the only mass-market VR product that recognizes the room you’re standing in and allows you to interact with virtual objects within it. Being able to walk around inside the VR world to get a different perspective on the mid-air painting you’ve drawn, or to squat down and examine the animated pieces in the virtual tabletop game you’re playing, or to walk in circles around the Aperture Science robot you’re trying to repair … that’s what makes the Vive special. When you take away all that and replace it with the more typical desk-chair-and-computer setup, the Vive starts to feel a lot more like the more conventional headsets it’s competing with: fun, but not necessarily worth what may be a hefty premium. 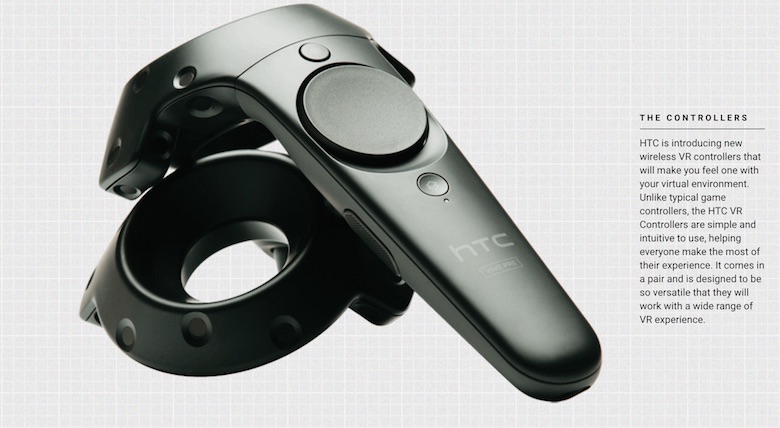 The less cynical perspective (and the one HTC’s marketing department will no doubt adopt) is that the Vive can do both. It can deliver a transcendent virtual-room experience and it can serve as a more conventional deskbound VR headset when needed. This is a totally reasonable point, borne of a logic that helped smartphones get off the ground over a decade ago: why carry a separate phone and PDA when you can combine the best of both into one gadget, even if the resulting combination costs more?

But reason and logic seldom sell consumer products on their own. Especially with a category at once novel and well-worn like virtual reality, sellers need to stir up some awe. I saw plenty of that in the stand-up section of HTC’s demo area at CES: a kid with a dopey smile waving his wands at some bit of virtual magic; a thirtysomething woman shrieking with delight as a whale crossed her sightline; a silver-haired man so engrossed in the virtual world that he walked straight into a real-world wall (despite the Chaperone feature meant to prevent this). What I saw on the seated side of the room was quite different: an array of chairs filled with swivel-headed gamers, entertained but placid, happy but silent. I was one of those players, and even though space combat is literally my favorite video game genre ever, and I was sitting in a gaming chair augmented with nearly $2000 worth of accessories, I was only pleased with my time spent playing Elite Dangerous. Pleased is great, but it’s not transcendent. It’s not awe-inspiring. And if the Vive is anywhere near as expensive as it’s rumored to be, it’s going to need to inspire some awe.

Fortunately for those selling the Vive, it already seems to be doing so. On my flight back from CES I sat next to two other show attendees by chance, both of them fresh from their first experiences with the Vive. One, a representative for a company that designed simulators for ships or aircraft (he wouldn’t say which), said he was looking into the Vive for his employer and was “definitely” buying one for himself as soon as preorders open up. The other, a exhibitor working on behalf of a fitness company, stopped short of saying she’d buy one but was nearly as exuberant in her praise of the product. All of us agreed that the walking portion of the demo was much more impressive than the sit-down session.

So for HTC and Valve, selling the Vive could be as simple as getting folks to walk around with it. In my mind, the only question is whether they can to get enough people to do so before it goes on sale this April.

Motorola didn’t send out a press release or an official statement but increased the price quietly by reflecting the same on Flipkart.

All tabs that you’ve opened in the Edge browser will now appear in the Alt+Tab tiled view, but users will have the option to revert to the classic layout.
YouTube 1.8M
Facebook 570K
Twitter 197K
Instagram 133K
RSS