Verizon has three unlimited plans now, which you can mix and match however you want

Verizon’s new Above Unlimited plan starts at $95 a month for “super users”, but any family account member can get a big discount by mixing things up.
Published 14 June 2018, 08:01 EDT

Verizon got back into the unlimited game around 16 months ago at the behest of the nation’s largest telecom subscriber base, tweaking, multiplying and improving its plans several times in response or in anticipation of similar moves by industry rivals.

Once again, Big Red appears to be going directly for T-Mobile’s jugular today by proclaiming “one size does not fit all.” Of course, the “Un-carrier’s” ONE plan can be amended and enhanced nowadays as well, but Verizon is ready to support an impressive level of flexibility starting June 18. 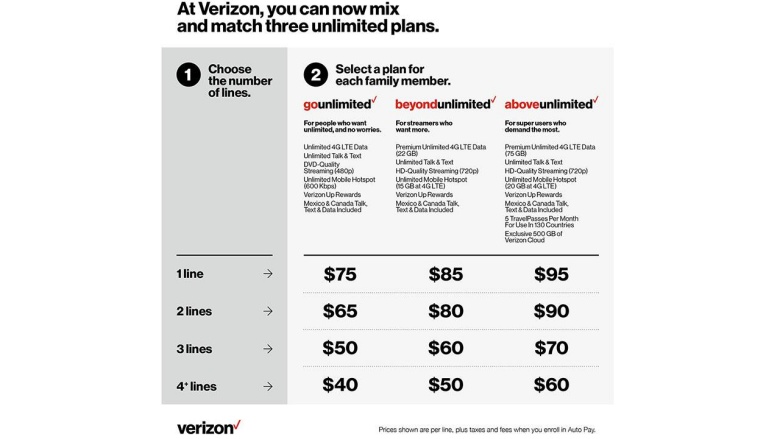 From Monday, each member of a family account can choose the unlimited option that best fits everyone’s individual needs. And to make sure it’s truly catering to each and every type of phone user out there, Verizon is adding a third “unlimited” service tier.

The Above Unlimited plan includes no less than 75GB of “premium” 4G LTE data, a 20 gig high-speed mobile hotspot allotment, five TravelPasses a month for use in 130 countries, as well as 500GB of Verizon cloud storage in addition to unlimited talk & text and HD-quality streaming support.

You’ll have to pay a steep $95 monthly fee for one Verizon Above Unlimited line, with solid discounts to be had starting from the second service line. Or you can “mix and match” your family’s unlimited plans, and save quite a bit of money at the end of the month.

For instance, if you combine one Above Unlimited, one Go Unlimited and two Beyond Unlimited lines, Big Red is only going to charge you $200 all in all. That’s $60 instead of $95 for the latest and greatest plan, $40 for the entry-level service tier, and $50 for each middling streaming-friendly Beyond Unlimited line.

Torn between Samsung and Apple’s best? This Galaxy S21 Ultra vs iPhone 12 Pro Max comparison will help ease some of your buyer’s dilemma.