Google’s Nexus replacements have again been seen in renders. But it’s the character of the carrier that these devices are intended for that have us puzzled.
Published 04 October 2016, 00:36 EDT

Verizon’s known for its voracious appetite for promoting itself. Usually, it does so in the form of placing its obnoxious checkmark logo — especially that old one with the obtuse angle and gradiated stroke — along with its scriptmark on manufacturers’ smartphones.

As you can see here, no checkmarks to be found. Just that Google “G” tramp stamp that took place of HTC’s lettermark and, in a different timeline, Huawei’s logo. The devices are also expected out in black. That said, Verizon customers could pull up the app drawer on that Pixel Launcher to find some bloatware inside. Physically sold Pixel and Pixel XL units in the US are to be from Verizon, after all, and there has to be something you give to the pied piper in order to sell your pickles.

The reveal for the Google Pixel and other associated hardware is scheduled for today. Check here for everything we’re looking at. We’ll check in on a Verizon unit if we can to see if everything’s clean on that side. 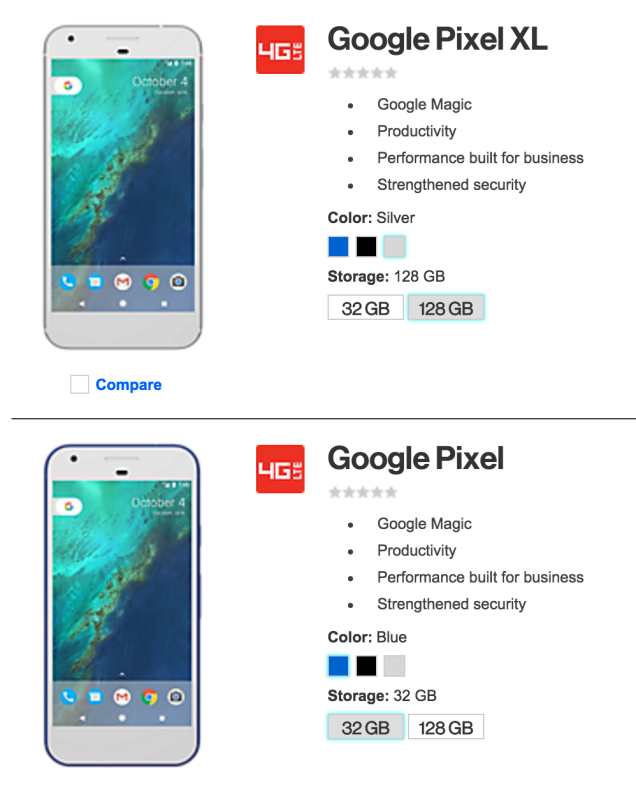 Each phone comes in 32GB and 128GB memory configs, but no price was listed before the entries were taken down.