Samsung’s Galaxy NotePRO 12.2 may be a serious tablet heavyweight, but it’s also got a premium sticker price to match, selling for $750 on up. If you’ve been hoping that a carrier subsidy might be a nice way to bring that figure down a little you’re in luck, as we’ve already seen evidence of a Verizon-branded NotePRO 12.2 leak. But when might such a device actually arrive? If we’re to believe a new leak, it could be just one week away, with launch dates revealed for both the NotePRO 12.2, as well as LG’s Android tablet.

As you can see below, this message indicates that Verizon’s preparing to introduce both the NotePRO 12.2 and the G Pad 8.3 on next Thursday, March 6. We don’t see any prices just yet, but we can wait; either we’ll find out officially in just a matter of days, or another leak will arrive to fill in the blanks before then.

The G Pad 8.3 may have taken a little while to get to Verizon, but the NotePRO 12.2 showing up this soon (again, assuming this leak is legit) is pretty nice, especially considering how incredibly long it took Verizon to offer the Nexus 7. 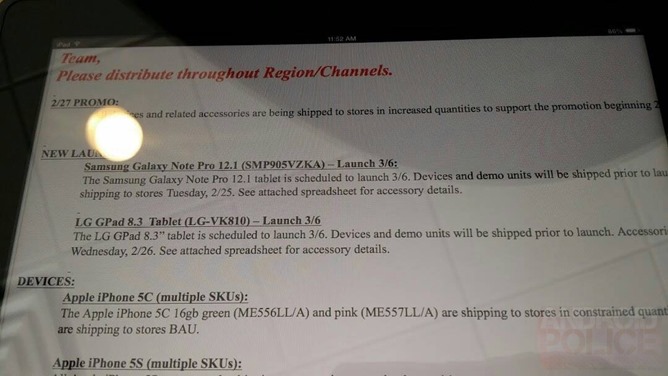