Verizon is now advertising a global roaming feature for some phones, suggesting the ability will be getting here soon.

Signs started emerging late last year that Verizon was planning on bringing global roaming capabilities to a couple of its then-upcoming LTE-enabled smartphones. It wasn’t long after that when a Verizon representative confirmed plans to bring just such a feature to a selection of the carrier’s Androids. These phones wouldn’t arrive with global roaming enabled, but the feature would be delivered at some point in the future – it seemed at the time like it might be closer to the end of Q2. It looks like Verizon could be nearly ready to flip that switch, as retail locations are updating their displays for certain Android models to indicate that global roaming will be “coming soon”.

When confirming the feature earlier this year, Verizon mentioned that at least the LG Spectrum and Mototola Droid 4 would be among those models covered. Today’s find concerns an info sheet for the HTC Rezound, adding another model to that list. Reportedly, the Droid RAZR (and presumably RAZR Maxx) will also be joining them.

We wish this new information gave us a more precise window for when we could expect global roaming to arrive, but considering the public face Verizon now seems to be giving the feature, we wouldn’t be surprised to hear the carrier discuss its plans in detail in the near future. 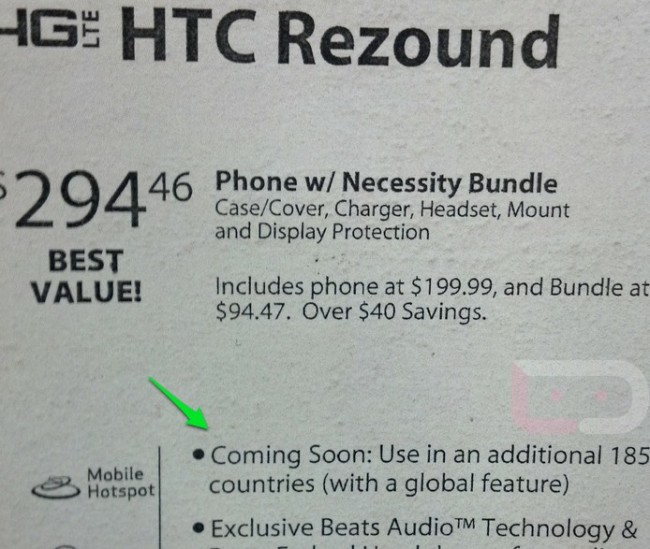