What is USB Type C, and what is it not?

As more phones are changing the connector which we use to charge and transfer data. What is USB Type C? Here’s what it can and can’t do!
Published 26 May 2016, 21:04 EDT

We’re a year into a tech transition. Cables and ports are a big deal. Regardless if you use Android, Windows, or iOS on your phone, you likely have some gadget or accessory with a Micro USB port. Micro USB has become a phenomenally well represented standard, but to move into a new era of devices and services, even a port this ubiquitous eventually needs to evolve.

The new standard is USB Type C, and it’s already arrived on a handful of devices. Current Nexus phones, HTC 10, LG G5, OnePlus, and the Lumia 950 all sport this new symmetrical port. So what does USB Type C do? How is it better? Let’s take a quick look at what goes into a “next gen” hardware standard. 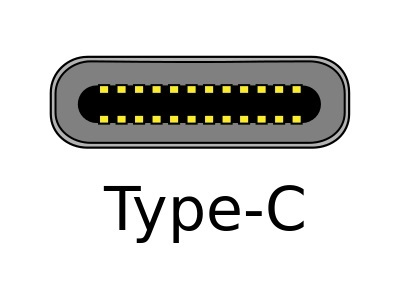 In terms of appearance, USB C is actually a touch larger than Micro USB. A tab on the receiving end contains the pins for the connection. An important goal was the development of a port which could be plugged in without the user needing to find a “top” or “bottom”.

This solves a major usage issue with standard rectangular USB. Even though those cables are symmetrical rectangles, the internal pins can only be aligned in one direction. We never developed a consistent way to convey on the cable or on the receiving device which orientation should be used. We’ll no longer have to guess on USB C. Line up the oval, and plug it in. It’s good to go. 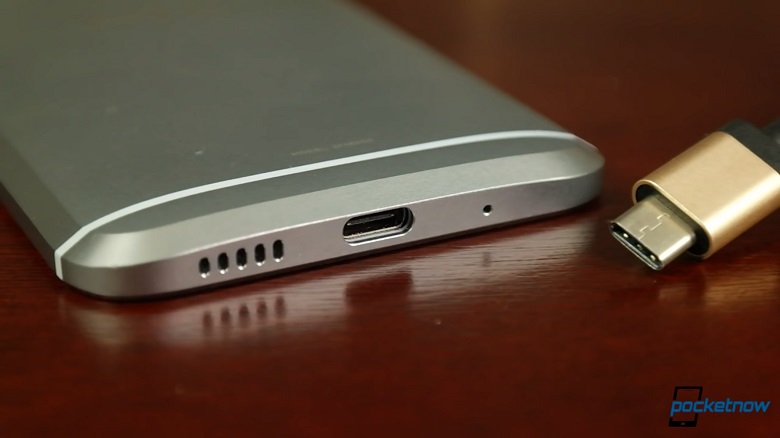 Even though the port design is slightly larger than Micro USB, only one port will launch the new connection. We’ll no longer have Micro, Mini, A and B versions of USB. Desktops, laptops, tablets, and mobiles will all eventually have the same connector, and cables will have the same plugs on both ends.

What can USB-C do?

Even though the port has changed shape, the data throughput is still built on the USB 3.1 standard. You might have seen those bright blue USB ports on newer computers. You can deliver up to a 10Gbps connection over USB 3.1. When paired with the Type C connector, you’ll have a broad enough connection to carry HDMI video signals making this a flexible standard for input and output. 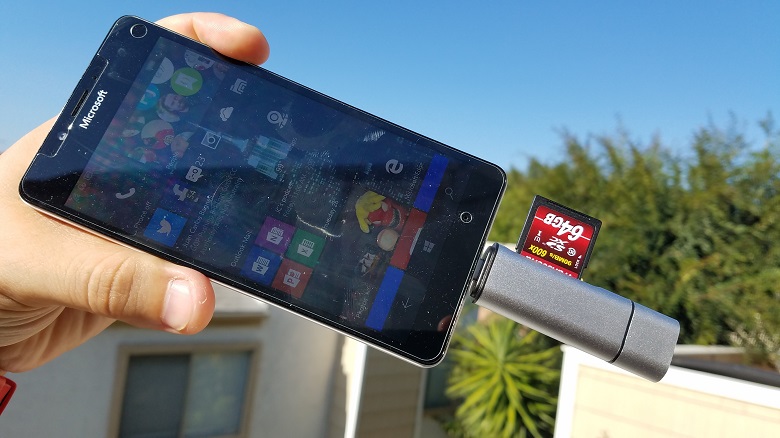 Maybe more compelling is the increase in power transfers capable over this connector. Type C will allow manufacturers to deliver more juice to your electronics. This means faster charging on phones, and laptops which don’t require proprietary connectors to charge. Apple has already taken advantage of this for the new Macbook, which only has a single Type C connector for charging and connecting peripherals. 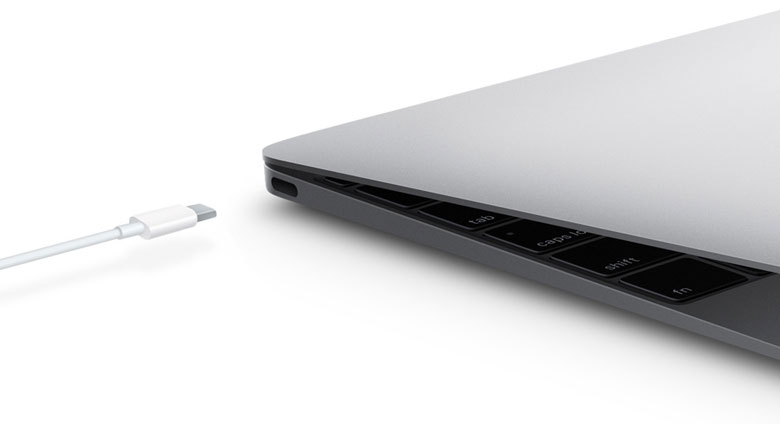 These ports are bi-directional by design, meaning the can send and receive power, and even phones with USB C can often be used to charge other devices.

What can’t USB-C do?

At the moment, we’re still watching this standard evolve. Just because a phone has a Type C connector, doesn’t mean it fully complies with the USB 3.1 standard. The LG G5 with a Type C port on the bottom of the phone transfers data at the same rate as a Galaxy S7 with a Micro USB connector. 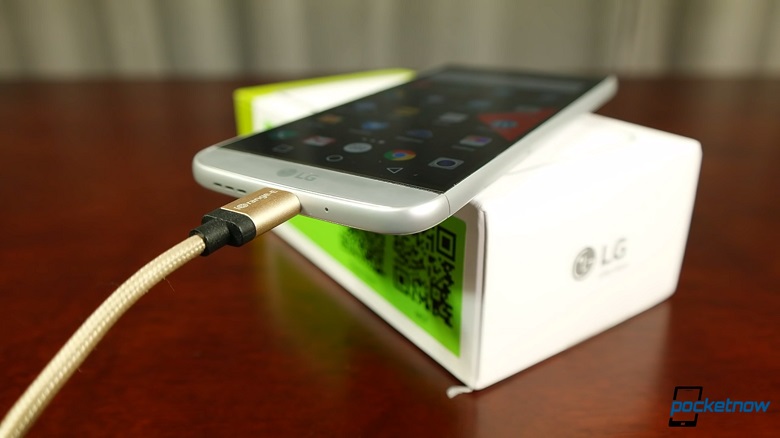 Testing by transferring a 1GB file onto the phone, both the G5 and GS7 took around 23 seconds to save the file, and both took about 30 seconds to transfer that file back to my laptop. The Lumia 950, which also has a Type C connector, was more than twice as fast in both tests. Microsoft introduced Continuum as a feature on Windows Phones, and achieving that desktop style experience required more bandwidth. We expect more devices in the future to take better advantage of that available bandwidth. 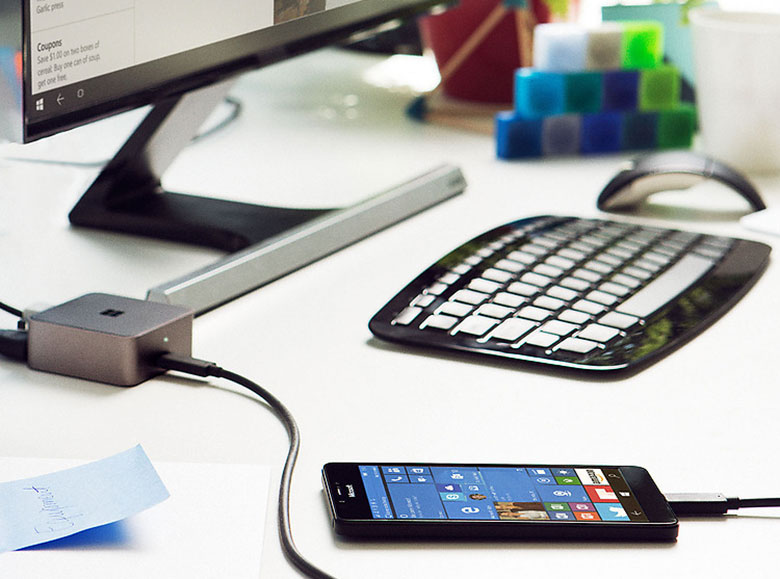 Also, as this is still an evolving standard, there are some concerns about that extra power which can be delivered over this cable. Cheap cables, and phones improperly communicating with third party chargers can create situations where gadgets sizzle. Retailers are working to purge problematic gear from their shelves, and until USB C becomes more popular, it’s always a good idea to charge your devices from the manufacturer supplied hardware.

So what about Thunderbolt?

Hey remember Thunderbolt? That crazy flexible port which was going to replace every other connector on our computers? That still exists, and wouldn’t you know it, Thunderbolt has joined forces with USB Type C. 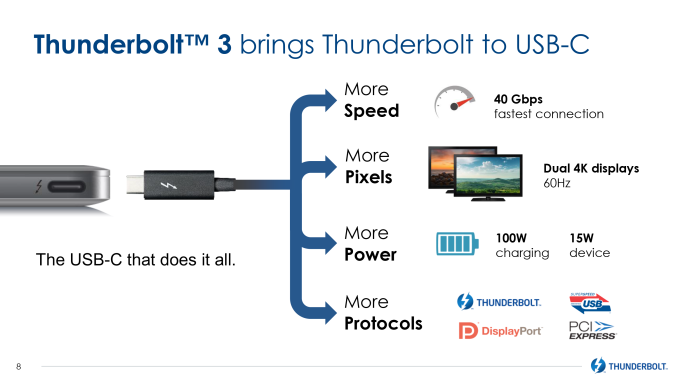 This might introduce some confusion in the short term, but Thunderbolt is now a super connector, which can include USB 3.1, PCI-E, and DisplayPort. One port to rule them all! While USB 3.1 supports up to a 10Gbps data rate, Thunderbolt can transfer at 40Gbps. This means you can power dual 4K displays and still have enough room left over to max out a USB 3.1 connection.

There isn’t any visual difference in the actual cable design, so manufacturers will have to slap a label on devices to differentiate between USB and TB, but at least if your computer comes with Thunderbolt, you won’t have to worry if it will support your USB gadgets.

The exciting thing about Thunderbolt is it provides enough bandwidth to make modular desktops more feasible. This article was written on a Razer Blade laptop with Thunderbolt, which can be connected to an external GPU using Razer’s Core housing. It’s not inconceivable that our phones might eventually benefit from these standards. Manufacturers might soon create docks for our phones that can provide desktop grade computing components, while our phones remain “the brains” of the setup.

Who knew one little connector design could be so versatile right?