Find out why USB Type-C isn’t good enough and what we really need for the future of connected electronic peripherals.
Published 17 March 2015, 12:53 EDT

If there’s one thing technology power users like us hate, it’s carrying a bunch of different charging wires around when we travel. Why can’t we standardized on one type of connector that works for everything? For a while around the turn of the century, many smartphones standardized on the mini-USB port for charging and syncing data. HTC even extended the port’s specifications to include audio input/output. That was pretty fantastic since you could use one port to charge, sync, and play music on speakers at the same time. In some cases it could even output video. (See: Why the 3.5mm headset jack is stupid c. 2009)

At some point the advanced single-port smartphone went extinct and the old 3.5mm TRS jack was added so that people could use whatever headphones they wanted without needing an adapter. TRS stands for Tip Ring Sleeve and that describes the three conduction points on the cylindrical audio jack that originated over 100 years ago and was mainly used in telephone switchboards. Yeah, that 3.5mm audio port on your phone is seriously old technology!

Today, most smartphones use a Micro-USB port for charging and data transfer, along with a TRS port for audio in/out. The TRS audio jacks take up a lot of space, and the Micro USB ports require a specific orientation for the connection that’s not always easy to figure out which way it goes in. Not exactly progress.

Back in 1995, the original Universal Serial Bus was a breakthrough in computing technology. No longer did we need to configure interrupt request addresses for peripherals. Just plug it in, the software recognized the peripheral, and after a few seconds it just worked. Perfect! The problem with USB ports is they’re still difficult to connect due to the impossibility of being able to tell which side is up when inserting the wire into the port, but they were on the right track with the extremely diverse functionality capabilities. 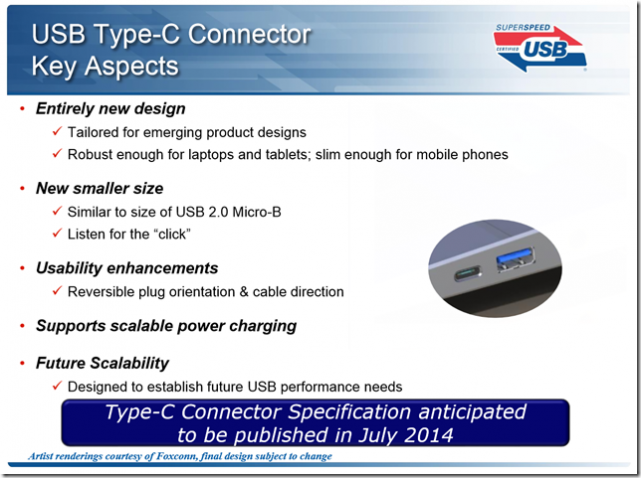 There is a new type of USB port (USB Type-C) on the horizon that’s reversible like Apple’s proprietary lightning port which would mean that it could be connected in any orientation… well, not really. It isn’t round so actually you have two orientation possibilities where as our standard USB only has one. The old TRS connectors of the 19th century were much easier to use since their round shape really did allow for connections in any orientation. All you had to do was poke it into the correct hole. Another advantage is that the USB type-C port will be able to do practically everything from data transfer, bidirectional battery charging, power, video i/o, etc. That’s pretty awesome, but personally, I don’t think that’s advanced enough. It still takes up too much room inside a phone, and certainly won’t fit in smart watches. It seems kind of short-sighted to me.

Wireless charging has become a pretty excellent alternative to using the USB port on most smartphones these days. I don’t have to plug in that frustrating wire anymore. I just set the phone on a charging plate when I’m not using it, and that will charge it. Data syncing mostly happens through WiFi and cloud services these days too, so the USB port isn’t that necessary. The problem with wireless inductive charging is that it requires a large flat area, takes a longer time to charge, and it’s easy to break the connection with a little nudge.

Give us magnetic connection ports!

I’m sure you’ve seen these type of magnetic ports on MacBooks (Apple calls it MagSafe), Surface tablets, and some smartwatches. Back in the Palm Pre days, the awesome touchstone charger even had magnets in it to keep the inductive charging placement intact on the phone. These ports usually have some sort of magnetic contacts that surround the electrical contacts and force them to stick together in the right spot. Connecting a wire to these magnetic ports is ridiculously easy. You just have to get it close enough and the magnets do the rest. In some cases you don’t even have to see the other end. You can make the connection in the dark! I can connect a keyboard to my Surface Pro just by getting the edges kind of close together. Magnets magically snap it into place by themselves. That’s how everything should work! The contacts don’t need to be inside the device with a giant hole either. Genius!

So what’s the problem? Well, everyone uses different types of these magnetic connectors. They’re all over the place in shapes and sizes. Plus, electronics manufacturers are probably going to start standardizing on the non-backwards-compatible and barely-an-improvement USB Type-C port which unfortunately still uses a male-female friction-based connection. There might be some worry about magnetic ports interfering with magnetometers within phones, but in most cases that can be avoided by keeping the magnets in the wire’s port or dock and simply having a thin strip of metal surrounding the port on the device. We don’t see magnetic ports on phones very often, but the Sony Xperia Z3 is one example. You can get a USB cable adapter that magically snaps to the side of the Xperia Z3 in order to charge it.

A magnetic universal serial bus port is really what we need! Something that has all of the audio/video, data, and electrical power capabilities that anything could need, except without the need to search for the hole. It’s 2015 people! These square-shaped, oval-shaped, and trapezoid-shaped wire ports are not nearly as easy to connect as the cylindrical TRS ports we had 100 years ago.

In addition to the iPhone 12 family, leakster Evan Blass has also shared renders of the upcoming HomePod Mini smart speaker.

HUAWEI is all set to launch its Mate 40 series tomorrow. The…