Look over some of the newest figures to break down the US smartphone market share among various OEMs.

With New Year’s a couple weeks behind us, and CES already a thing of the past, we’re solidly into 2014 by this point. While that means that we’ve got 50 weeks of new mobile tech news to look forward to, it’s also about time that we’re able to look back on some new figures from 2013, and as reports come in on smartphone market shares in the States, we can start examining the ongoing shifts in power.

Apple appears to be maintaining its lead with little effort, and compared to Q4 2012, this past quarter showed its share rise from 35 percent to 42 percent of the market. While Samsung saw US growth as well, its improvement was more meager, only moving up to 26 percent from 22.

HTC and Motorola both had greater than 10 percent of the market a year ago, but each ended 2013 with fewer users than the year prior. BlackBerry saw a similar decline in ownership, and aside from Samsung and Apple, LG was the only OEM to see its US share make gains over the course of the year.

“Where’s Nokia?” you may ask. That’s a fair question, especially since just a couple months back we were looking at data that showed Nokia rising to fourth place in the US, between LG and Motorola. The key there is probably what data we’re looking at; today’s numbers consider current ownership, whereas those figures that placed Nokia so highly looked at hardware shipments – so, new sales, essentially. The discrepancy may be explained by users simply holding on to their older non-Windows-Phone handsets. 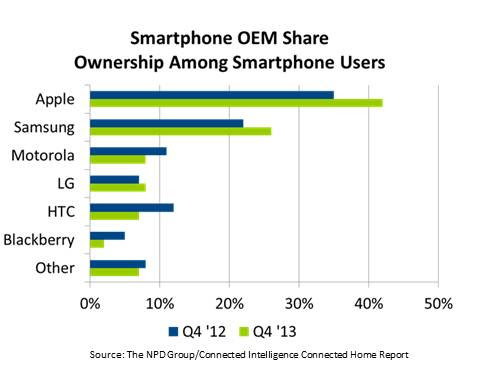