Under Armour’s new fitness gear comes in a big red box and contains some of the most powerful health-tracking technology we’ve ever seen, built by HTC.

The future of connected fitness is here, and it comes in a big red box.

When HTC and Under Armour invited me to a briefing on their newest “connected products” several weeks back, I felt the same way I always do about athletic technology: optimistic about the potential, but guarded because I’m really out of my depth when it comes to anything concerning fitness. And when the demo videos started rolling, a hard rock anthem playing over jump cuts between pro athletes and impossibly fit gym rats, I tuned out. I’d seen this kind of commercial before, more than once, and I had yet to feel the need for a Garmin or a Fitbit.

But then the adrenaline-soaked marketing faded out, the lights came up, and the people behind the new products got to talking. And the more I listened, the more I liked what was taking shape. Jaime Rivera will follow up with a full review later on as part of the Pocketnow Fitness series, but here are some initial impressions after a few weeks with the early-release hardware. 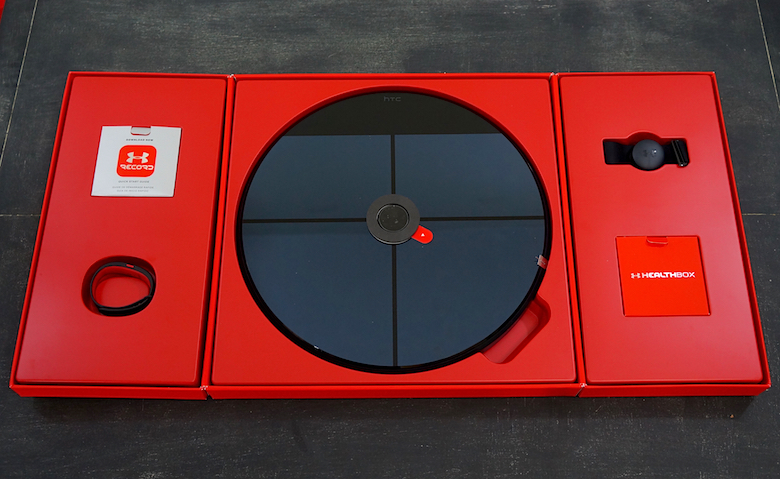 The first thing to understand about these products is that they’re not meant to be thought of as distinct gadgets, but rather as components of a fitness ecosystem with your smartphone as its nexus. The packaging makes that clear by bundling the core components together in one package called the HealthBox, which contains a bathroom scale, chest-worn heart monitor and wrist-worn fitness band. (I also got the chance to trial two additional products, athletic earbuds –also equipped with an ear-canal heart rate sensor– and a pair of connected sneakers, but these are sold separately.) 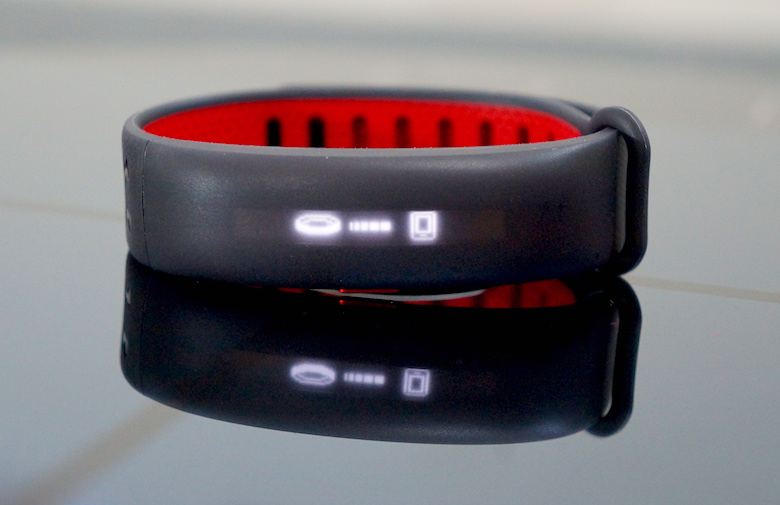 Not everything in the HealthBox is brand new. If you followed our HTC coverage from MWC 2015, you might remember the company’s Grip fitness band. While striking in photos, the Grip was clunky and rigid on the wrist, making it uncomfortable to wear. The redesigned UA Band is the Grip’s polar opposite: much more conventional in design but also much more comfortable. Its soft rubber is a low-profile matte black on the outside and a flashy red on the underside, with perforations for ventilation and a choice of two adjustable bands to accommodate all wrist sizes. Like many fitness wearables, it tracks things like steps, heart rate and sleep time, and allows for minor inputs via a small monochrome OLED touchscreen, with more involved interactions happening on a Bluetooth-connected smartphone. Probably the best feature here is a variety of preprogrammed workouts: unlike earlier fitness bands that couldn’t handle anything more complicated than a run, there are modes here for everything from weightlifting to biking to a low-impact walk. HTC says the onboard battery should be good for 5 to 7 days between charges, and my early testing confirms that.

Next up is the centerpiece of the HealthBox, at least in a physical sense: the UA Scale. To be perfectly frank, as a mobile guy I never thought I’d be reviewing a scale … but this is more than just a bathroom appliance. The circular pancake echoes the subtle design of the Band with a black or white top surface (this time in glass) and a red underside bearing a textured dimple pattern. Sure, you’ll only see the bottom half when you need to change out the Scale’s four AA batteries, but this is the kind of attention to detail we’ve always loved about HTC, and it’s great to see it used to liven up what could easily have been a pretty mundane product. The Scale’s display is simple but bold: a segmented monochrome OLED panel that’s easily readable from five and a half feet up. In addition to showing weight and body-fat measurements from the Scale’s sensors, the display offers cues for pairing the Scale with your smartphone via Bluetooth so that each time you step on, your weight and BMI levels are automatically uploaded to your smartphone.

Rounding out the collection is the HR Strap, a heart rate sensor mounted on an elastic band worn around the chest. This device is meant to give a more accurate heart rate reading than the Band, whose position on the wrist makes it more prone to error. I decided to leave the in-depth testing of this component to my colleague Jaime Rivera, who’s better at handling dedicated fitness accessories like this; watch for it in the full review. 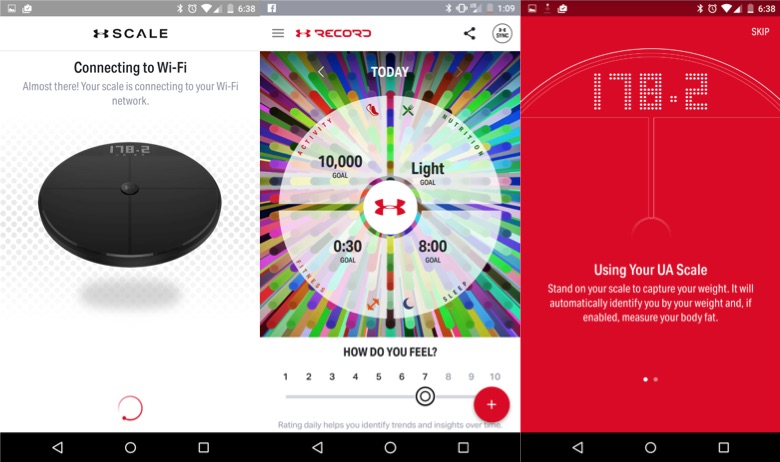 Probably the most significant new product doesn’t come in the HealthBox at all. The UA Record app is free to download from the Apple App Store or Google Play Store, and it represents a complete rethinking of Under Armour’s approach to fitness tracking. The company’s SVP of Connected Fitness, Robin Thurston, pointed out at our briefing that UA’s mission is to empower athletes to improve, but that “it’s hard to make athletes better if you can’t measure what they’re doing. Think about it: you have all this information about your car, but you don’t have that kind of data about your own body. UA Record will ultimately become that dashboard, where all that [information] comes together.”

UA Record’s interface is built around a four-lobed circle whose individual segments represent the key tenets of UA’s idea of health: Fitness, Activity, Nutrition and Sleep. Each of the pie wedges displays up-to-date info on pertinent information within its category, such as steps taken or amount of calories even, while the central tile displays your current weight (thankfully it only does so momentarily, and only when tapped). Below the segmented circle sits a slider with numbers from 1 to 10, with a simple prompt written above: “How Do You Feel?” The more often you assign a rank to how you’re feeling, the more data you have to try to figure out what health choices make you feel good (and which ones make you feel terrible). And if your own data isn’t enough to help you figure that out, you can mine your friends’ experiences for help: with 157 million unique members, UnderArmour proudly boasts the biggest fitness community on the planet. You’re able to share workout details with anyone you friend on the UA Record app – or invite them to challenges so you can compete even when you’re not able to Jazzercise together (or whatever).

Data is the crux of the new approach to fitness, and it’s what makes the whole HealthBox concept so alluring. There are plenty of apps out there for tracking your calories or monitoring your activity, just as there are plenty of accessories available for keeping tabs on your heart rate and step count. But the beauty of the HealthBox concept is that you don’t need to manually input any of that; you just buy the box, connect the accessories to your phone, and boom: the hardware and software work together to track all of it for you.

The Under Armour HealthBox isn’t magic; it won’t make a fitness freak out of you if you’re not already so inclined. But if you’re at all interested in bettering yourself physically, or you want to spice up your health tracking in 2016 with some very futuristic tech, you’ll absolutely want to give it a look. The HealthBox launches on January 22 for $400, while its constituent parts will be offered separately for prices ranging from $180 for the Band and Scale to $80 for the HR Strap. Again, these are just our first impressions; stay tuned for our full HealthBox review coming soon for much more detail!