A screenshot of the Alarms app is directly referencing a particular Sleep app, which means that it should be well on its way for the Apple Watch.
Published 07 October 2019, 22:00 EDT

If you own an Apple Watch you can track your sleep with a third party application, but, at this particular moment, there’s no Apple solution for achieving this. Apple’s own take on sleep tracking was rumored to arrive with the Apple Watch Series 5, but that didn’t materialize. Now a screenshot, courtesy of 9to5mac, of the Alarms app is directly referencing a particular Sleep app, which means that it should be well on its way.

As you can see in the screenshot of the Alarms app below, Apple is directly referring to the Sleep app. This will allow users to set bedtime and wake up alarms on their Apple Watches, something currently only possible on the iPhone or iPad.

However, before you get your hopes up, a first party Sleep app from Apple will likely only be available on the Apple Watch in late 2020, according to recent reports, as it might be related to upcoming (new) hardware. We’ll keep an eye out and inform you as soon as we hear more about the Apple Watch and Apple Sleep app. 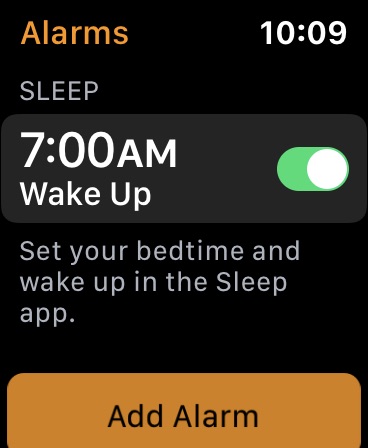 Today’s deals include tons of Apple products, such as the latest Mac Pro, the Macbook Pro, iPad Pro and more from both Amazon and B&H