Here’s why 4 UltraPixels are better than 13 megapixels

Higher-res or larger pixels? Which of HTC’s most recent phones has the better camera? Read why the One M8 wins in this UltraPixel vs megapixel face-off!
Published 26 May 2014, 18:44 EDT

I’ll be the first to admit I was a little hard on the One M8’s camera abilities and HTC for its decision to stick with only 4.1-megapixels in its flagship smartphone’s camera.

I’m not here to beat a long-dead horse. I’ve explained multiple times that 4.1-megapixels is simply a gross camera resolution in a day and age where QHD displays are common on laptops and tablets and 4K televisions are a increasingly common thing.

Even today, while I’m more impressed by the M8’s camera than I ever thought I’d be, I’m still turned-off by its output resolution more than anything. The absolute best shots I’ve snapped don’t make great wallpapers on my computer. They look visibly stretched and slightly pixelated – trust me, I’ve tried. And you can hardly crop at all, unless we’re talking Instagram’s standard 612 by 612 crop, in which you have plenty of room to play.

The only thing they work (outstandingly well) for are social sharing, which is about 85 percent of my usage anyway … so I can cope. 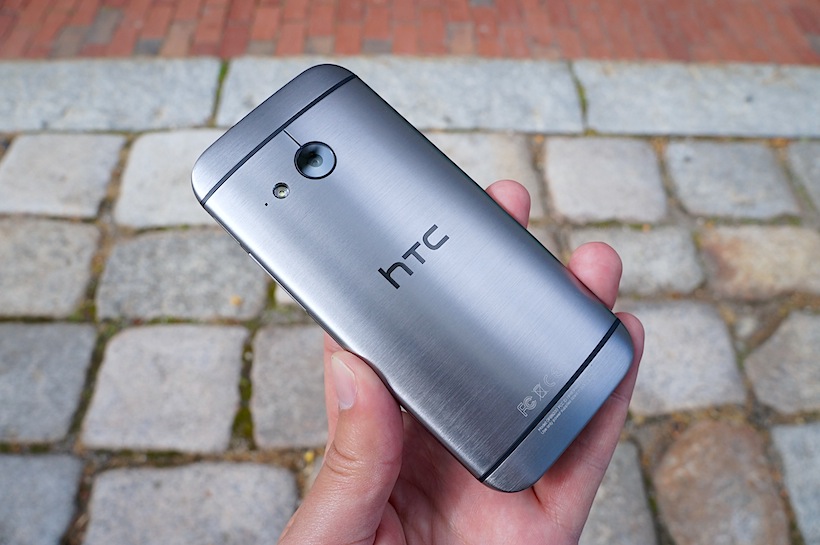 When I learned the miniature One M8 – if you want to call it that – would bear a camera with over triple the resolution of the M8’s camera, I was hopeful it would be fitted with the great optics we hoped would come on HTC’s 2014 flagship. No cigar.

The One mini 2 may come with a 13-megapixel camera, but it’s not even a match for the 4.1-megapixel One M8 camera, Duo Camera aside.

Why? How is that possible? By the very same message HTC has been trying to drive home for over a year now. Megapixels don’t matter.

They do, but I’ve explained more than once that they only matter so much. Rather, what you do with those pixels is far more important. And what HTC does with a comparatively small amount of pixels is quite impressive.

Take the 4.1-megapixel sensor on the backside of the M8 for instance. Our own Adam Lein and Michel Fisher both concluded that the One M8’s camera is superior to the 13-megapixel shooter on the One mini 2. Joe Levi put the Desire 816’s 13-megapixel shooter against the M8’s UltraPixel camera, as well, and found the exact same thing.

While the 816’s and One mini 2’s cameras have over three times the resolution and offer more detail in well-lit scenarios, the M8’s camera offers more consistent and reliable performance in a broader range of lighting scenarios. The M8’s camera provides more natural colors, contrast, and simply better looking pictures, while the 13-megapixel cameras from HTC look washed-out, unnatural, and muted. 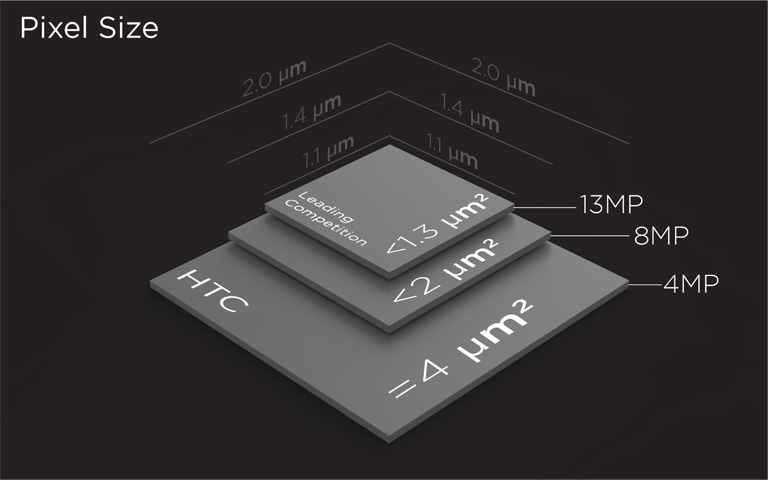 The reasoning is simple.

The One mini 2 does not use HTC’s UltraPixel technology. Or, in real words, it’s a standard-sized image sensor with a higher-resolution output. The One M8 has roughly the same size sensor inside with less than one-third the resolution, meaning the pixels on the M8’s sensor are considerably larger – 2µm, compared to the more standard 1.1µm of the average 13-megapixel camera.

This particular difference is most visible when lighting becomes an issue. The M8 is capable of capturing far more light, and thus more data, than the 816 or One mini 2 in the same amount of time. Considering lighting is often the biggest factor in smartphone photography, better performance in low-light situations – though the M8 is far from the best in such a scenario – is a huge plus.

Software, as we’ve noted before, makes a significant difference, as well. Not having used the One mini 2 myself, it’s difficult to say exactly what the experience is like, but the output – especially in auto mode – tells me HTC put a lot more emphasis on the M8’s image sensor than the One mini 2’s. This brighter set of photos is a perfect example. Below, the colors are far more saturated, edges are sharpened, and contrast is notably higher. 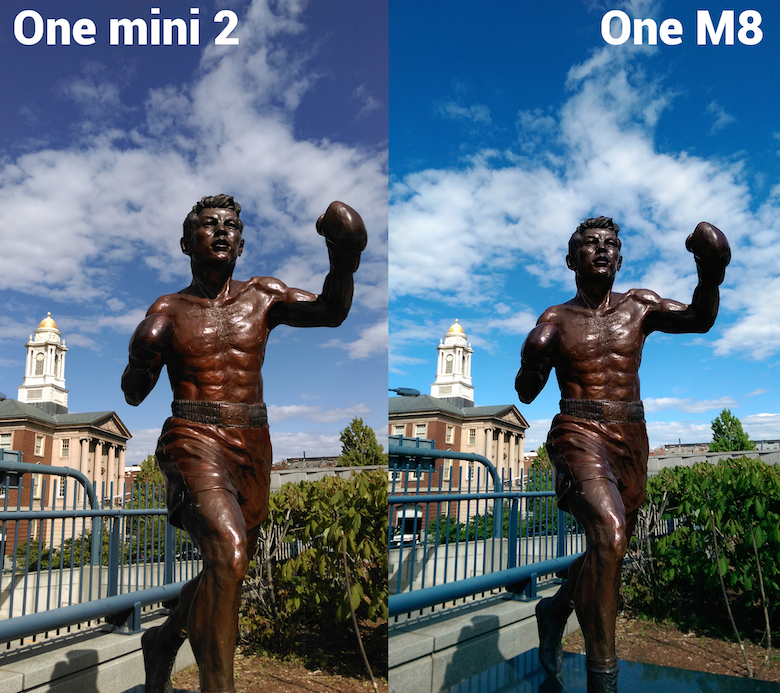 Self-respecting photographers may cringe at the thought of all this happening behind the scenes or may feel some pictures come off as over-sharpened or over-saturated, but I’m willing to bet the average user will pick the One M8’s pictures over the One mini 2’s at least 90 percent of the time. While not necessarily more true-to-life in every scenario, they’re often more visually pleasing, and that’s what most people are looking for, not accuracy.

The only area the One mini 2 has an advantage over the M8 is pure resolution. There are more than triple the number of pixels to work with, meaning when a shot is fantastic, you can crop, scale, and edit far more than you could with a similar shot on the M8. However, the odds of a fantastic picture being taken with the One mini 2 are slimmer than those using the M8. 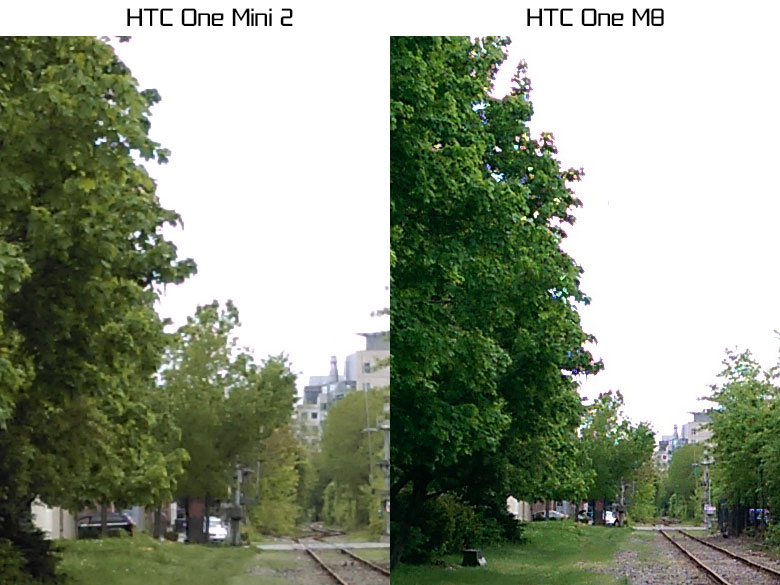 Adam Lein explained that chromatic aberrations (seen above), while present in both images, are definitely more pronounced in the One mini 2’s images.

There may be more resolution to work with, but a lot of that “extra data” is lost due to cheap glass, poor software, and poor optimization. That begs the question: what’s the point of cropping and zooming when the pictures simply don’t look great?

HTC put more tender loving care into the M8’s camera, and it shows in more ways than one.

Like Michael and Adam, I’d still take the One M8’s camera over the One mini 2 or 816 any day, despite the higher resolutions. That, however, doesn’t mean I wouldn’t like to see a larger, higher-resolution sensor with a 2.0µm pixel size. Or, if nothing else, HTC could take a page from Oppo’s book. Am I right?