One of the reasons Apple needed so much time to launch the long-rumored 10.5-inch iPad Pro is likely this super-small TSMC-made A10X SoC.
Published 30 June 2017, 11:54 EDT

Not that anyone still had any doubts after waiting so long for Apple’s first 10.5-inch iPad Pro, but we finally get confirmation and an in-depth look at TSMC’s delayed 10nm-based A10X “Fusion” chip.

This comes with an exact die size of 96.4 square millimeters, compared to the now massive-sounding 143.9 square mm of the TSMC-produced, Apple-designed A9X inside the 9.7-inch iPad Pro and original 12.9-incher.

That’s quite a substantial efficiency upgrade from the old 16nm process node, and a taste of what’s coming to the iPhone 8 in the 10nm A11, which was reportedly plagued by pre-release issues as well, replacing last year’s 16-nanometer A10.

Next up, the Taiwan Semiconductor Manufacturing Company wants to leap straight to 7nm technology for SoCs likely to power 2018 iPhones and iPads, but also a host of Android flagships following a major deal with Qualcomm. 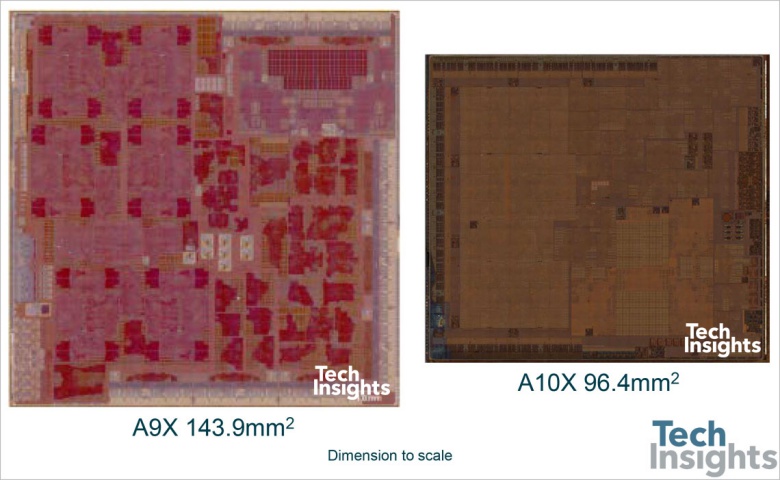 Until then, we should highlight how unusual it is for Apple to inaugurate a new class of mobile processors on an iOS tablet, though this very special year, revamped iPhones probably don’t need the extra attention. Besides, it’s never right to compare the performance of devices separated by so much screen real estate. The iPhone 8 will undoubtedly be faster than its predecessors, just as the latest iPad Pro touts 30 percent more CPU speed and 40 percent graphics improvements. That’s really all that matters.