What the Samsung Z means for Android

We’ve heard a lot about Tizen while seeing countless delays of official hardware. Now that the Samsung Z is official, read what it means for Android.
Published 11 June 2014, 19:02 EDT

After several delays, Samsung has finally followed through on its promises.

Last July, we were eagerly awaiting the launch of the first Tizen smartphone, but word emerged that Samsung would be facing some delays. The rumor claimed Samsung would have to push back the launch about two months. Come November, we heard again that Tizen hardware would be delayed, that we wouldn’t see any consumer-focused devices until 2014.

Fast forward to January and we still hadn’t see the first Tizen devices. Samsung’s plan was to launch the first Tizen handsets in the first half of the year. Clearly, that didn’t happen. Instead, predictions and rumors seemed to corroborate a Q3 2014 launch.

It would appear that’s exactly what’s happening. Last week, Samsung made its newest smartphone, the Samsung Z, official. To be launched in Russia in Q3, the Samsung Z will later spread to other, unconfirmed markets. There is no price, no official date, no openly available launch schedule – just a three-month launch window, a render, and some official specs. The Samsung Z comes bearing some older sounding specifications, at least by comparison to hardware on, say, Android. It has a 2.3-GHz quad-core SoC, 2GB RAM, 16GB storage, a 4.8-inch 720p OLED display, and an 8-megapixel primary camera. 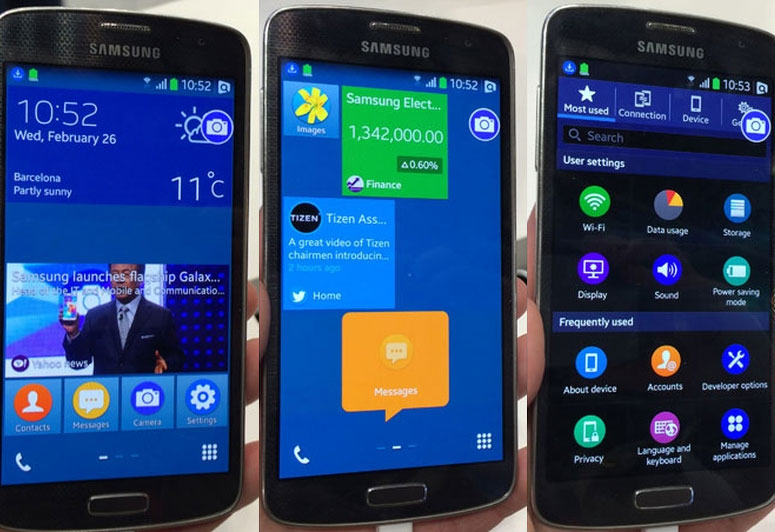 On the outside, the Samsung Z looks like the bastard child of the old Samsung Captivate on AT&T and a Galaxy Note 3. It has the squared corners of older Samsung phones, the custom hardware and capacitive navigation button layout of newer Samsung phones, and the faux leather back of the Galaxy Note 3 handset.

Oddly enough, the Samsung Z pulls two new tricks from the Galaxy S5’s repertoire. While it may not come with an IP67 certification, it does come with a heart rate sensor and fingerprint scanner.

And of course, the Tizen software, which powers the user experience on the Samsung Z, strongly resembles the newest incarnation of the TouchWiz UX. The transparent status bar resembles that of the latest Android version, KitKat. The home screens and widgets appear straight out of TouchWiz. The notification shade and Settings apps – at least the last time we saw them – look almost identical to those found on the Galaxy S5. And several of Samsung’s favorite features, which were missing from the Galaxy S5, are front and center on Tizen: Samsung Apps and its accompanying digital content stores (Samsung Music, Samsung Video, etc.).

So how will this new Tizen hardware mean for Android? That is the big question, after all, isn’t it? Will Tizen bring the untimely demise of Android? Is Samsung building a foundation to one day stand on its own in the mobile world, sans Google? 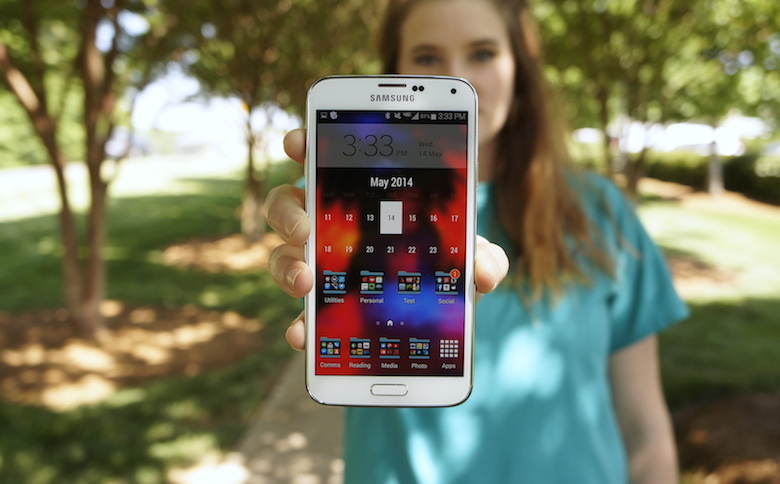 It’s impossible to say, but I’m one of the crazies who refuses to believe Samsung is content bending to Google’s will. For the last five years, Samsung has catered to Google’s wants and needs. Even though Android is open source, in order to take full advantage of the software, manufacturers must bow to Google, adhering to a fairly strict set of rules. First and foremost, you mustn’t deviate too far from the core Android experience.

Take Amazon’s Kindle Fire series as a prime example. The reason you don’t see Gmail, Chrome, Google Play, or other Google services pre-installed on any of them is, yes, likely because Amazon doesn’t want Google’s services. Its tablets are ultimately affordable vehicles designed to push its own content and services – Amazon Prime Instant Video, Amazon MP3, etc. But even if Amazon did want, say, the Google Play store on its Kindle Fire tablets, Google wouldn’t allow it, unless Amazon drastically toned down the customizations in its strain of Android software. 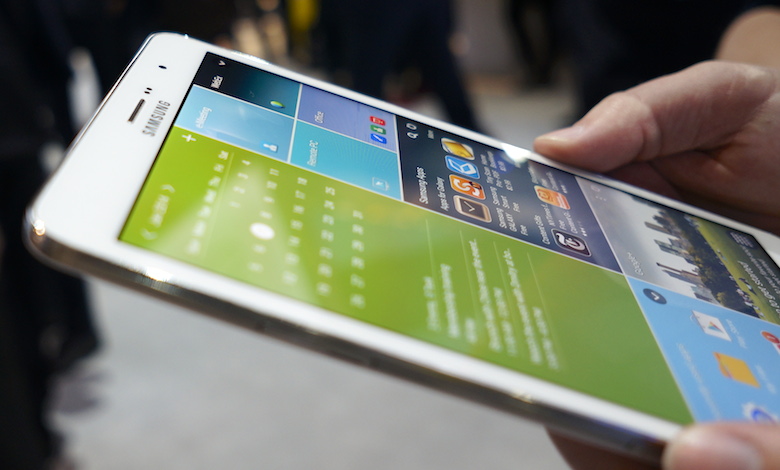 Samsung faced the same scrutiny in late January. The Magazine UX debuted on new Samsung tablets at CES 2014 and nudged Google over the edge. Samsung’s idea of what Android should look like slowly started to diverge from Google’s own UI, plus Google’s digital content stores were slowly pushed into the background while Samsung confusingly highlighted its own stores.

Samsung and Google have since come to an agreement. The Magazine UX and Samsung’s digital stores will be scaled back, if not removed altogether.

Naturally, those things will reemerge on Samsung’s own Tizen OS. It only makes sense. And in the short term, that’s one way Samsung can rope in a small number of its users who unknowingly bought content through Samsung, not Google. This sort of shift shouldn’t affect Android in a major way, and I’m not sure Tizen will at all, even in the distant future. It will need major, third-party development support and millions upon millions of users to quit Android in favor of an unproven, baby operating system.

Samsung has a mountain to climb first. 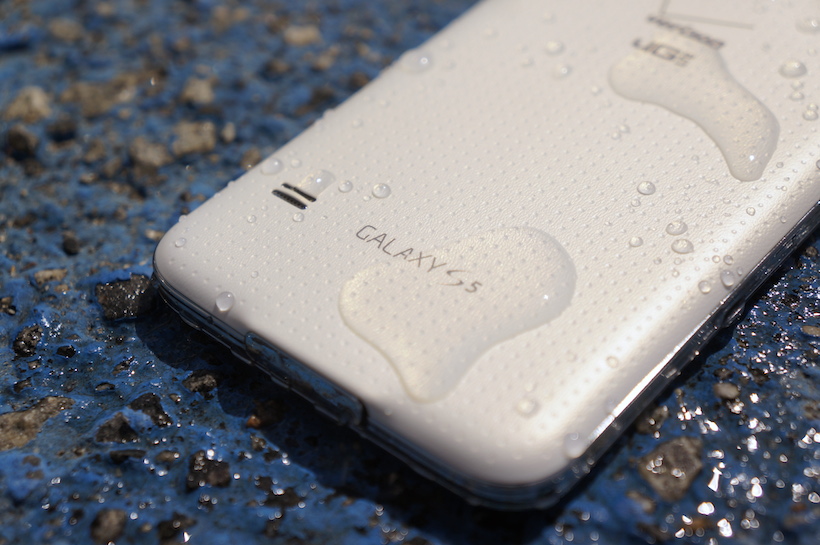 However, there’s a reason Google will continue to tiptoe around Samsung. The heft of its market share lies in Samsung, who still seems deeply devoted to Google and Android. But Samsung has a solid Plan B. Should Google cross the line and demand too much from the South Korean handset maker, it could slowly begin to transition its efforts towards Tizen while giving Google’s Android less love over time.

The question which remains is, can Samsung sell its Tizen handsets as easily as its sold its Android-powered Galaxy phones? Is Samsung the draw, or is Google? Better yet, is it the combination of the two?

We don’t know and the chances of any of this mattering in the next three or four years is unlikely. However, Google and Android may not be around forever, at least not as heavyweights in mobile. Samsung is being proactive – unlike many of its mobile predecessors – and I can respect that.

That said, Tizen is anything but an immediate threat to Android. Samsung will likely conquer emerging markets while it builds up its development support. It will be years before we see Tizen as a major player on the smartphone front, if we ever do.