Three fun things to do with the Samsung Galaxy Note Edge

The Samsung Galaxy Note Edge is one of the more daring Samsung offerings in some time. Is it as daring as super gluing a camera to a smart phone? In some ways, it is not. But, one of the scary things about the Samsung Galaxy Note Edge is that this phone is so unique, Samsung might just be on to something. In many ways, that makes this phone even more daring than the camera/phone hybrid. Because this design might have some much to offer, it might just stick around.

I’ve had a couple of weeks with the Samsung Galaxy Note Edge and I’ve come across a couple of fun things to do with it that I thought I’d share with you. I certainly did not expect to find this much utility in a phone with a bendy screen, but as it turns out Samsung had some good ideas. 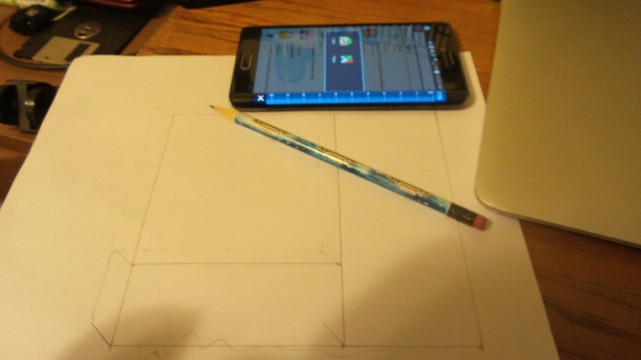 Let me get this straight

One of the problems (and I’m using that term very loosely) that many smartphones have today is that they don’t have a straight edge on them anywhere. Every side has some kind of port, or button, or something that that detracts from an otherwise straight-sided rectangle. The other day, I needed to draw up some plans for a life hack, or mod, if you will. So I looked everywhere for a ruler. We have pretty much abandoned paper in my house, almost wholesale, so finding a ruler that was not a tape measure was a daunting task. Until I realized that the Note Edge had a ruler and a straight edge in one. Voila! Plans drawn up lickety split without breaking a sweat.

Some of you might be thinking, “You used it to draw with?” and the answer is yes. Drafting a serious craft, and doing so with a bumpy line like I might get from my Nexus will not do. Sometimes, you just need to go back to basics, and if your tech can help you get there, embrace it.

I’m on the night train

The night clock is another great feature on the Galaxy Note Edge, but it’s one thing that Samsung didn’t take far enough. The night clock displays the time and weather for you at night. It can rest flat on your bedroom table – or milk crate if you’re a bachelor – and you can still see the time in the curved screen. Personally, I’d love for this to be on all the time, even during the day, so I could set my phone on my desk and see those things at a glance, but alas, Samsung limits you to just a twelve
hour window during which you can reap the benefits. 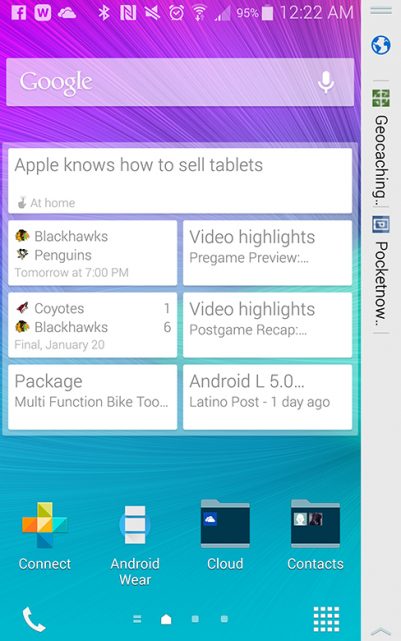 The edge of the phone allows you to quickly access a number of different functions without first having to return to the home page. First, Samsung put the quick launch icons in the edge of the phone, which clears up some space on your main wallpaper. More than that, putting the icons in the edge allows for more room for persistent icons and it allows you to access them from within any app. Rather than having to press the Home button to return to your home screen, you can swipe the edge to get to your home icons, allowing you to jump straight from app to app with no middle man.

Another added bonus to this is the one-handed utility of the phone. When holding the phone in your right hand, you can use your thumb to tap on any of those icons to launch them. Like with the Blu phone, what you do then is a bit limited, but it’s a start.

Plus, the various toolbars add utility to this, most notably (in my opinion anyway) the bookmarks bar from your web browser. You can bookmark web pages to remain in that bookmarks bar so your favorite website is just a tap away. As you can imagine there are few limits on the utility of this edge.

Overall, Samsung found some great utility in this odd phone. But earlier, I called it daring? Why is it so daring? This may not be a one-and-done proposition. This could become a trend, not only for Samsung, but also in the industry. We have already seen LG develop a model like the Edge.

Samsung is also considering bringing it to the Galaxy S 6 – and it should. The edge makes for a weird phone, don’t get me wrong, but it adds a ton of usability to this already great product and it has potential to stick around, making it radical, but also slightly dangerous to the competition. 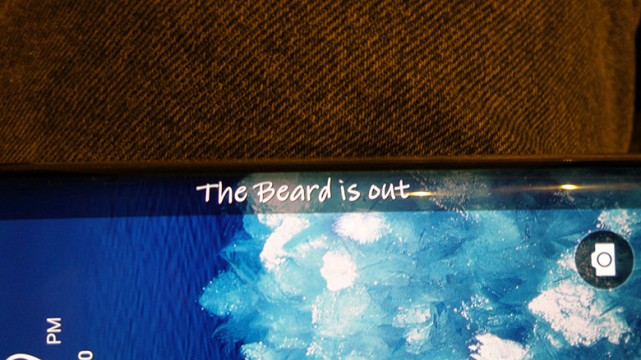 After months of waiting and a number of delays, Huawei has finally unveiled the next generation of the Huawei P50 series at its Huawei P50 launch event.