This is the LG V20, officially out with Android Nougat and a Quad DAC system

The world has its first native Android Nougat smartphone and it boasts major multimedia hardware and software. Check out its specs here.

First with Android Nougat out of the box. A loud and clean Quad DAC system. Wide-angle cameras in front and on back. Multi-screen multi-tasking. And some of the steadiest video recording capabilities.

LG and Google have been promoting the heck out of the sequel to the V10 smartphone and now, we finally know what the V20 is all about.

Here are the specifications:

The build of the device revolves around a shell made of AL6013 alloy, mostly containing aluminium and trace amounts of magnesium and silicon among other metals. The top and bottom sides are fronted with silicone polycarbonate to take in 20 percent more shock than conventional materials. A back shell can be removed via a pin key tool for access to the removable 3,200mAh battery and the nano-SIM and microSD card slots. The rear is also where you’ll find the fingerprint sensor.

As with the V10, the V20 has been tested and approved for the MIL-STD 810G rating, functioning properly even after multiple drops from four feet up.

The first smartphone with Android Nougat on first boot is skinned with LG UX 5.0+, an iteration of its interface software seen on the G5. Our initial look at the UX — which still has to be finalized — included expanded multi-window app capabilities and omitted the app drawer from the home screen. What we believe is “replacing” that experience is Google’s In Apps search, embedded on the V20’s home screen and Second Screen, meant to sort out the apps and content on your phone. Said Second Screen, carried over from the V10, is twice as bright and outputs larger text for better notification readability. It also has an “Expandable Notifications” feature for quick glances at larger messages and options to reply and share.

LG has staked the V20’s raison d’être on both the consumption and creation of multimedia.

The V20’s SABRE ES9218 Quad DAC system are provided by ESS Technology — ESS provided the DACs on the V10. The system is touted to drive down ambient noise and distortion, provide fine left-right tuning and 75 levels of volume control. The phone can play FLAC, DSD, AIFF and ALAC audio formats. Bang & Olufsen also assisted in tuning the phone’s three microphones, though this tuning is only available in certain markets, likely due to licensing agreements. The Studio Mode audio recording app provides richer recording options. 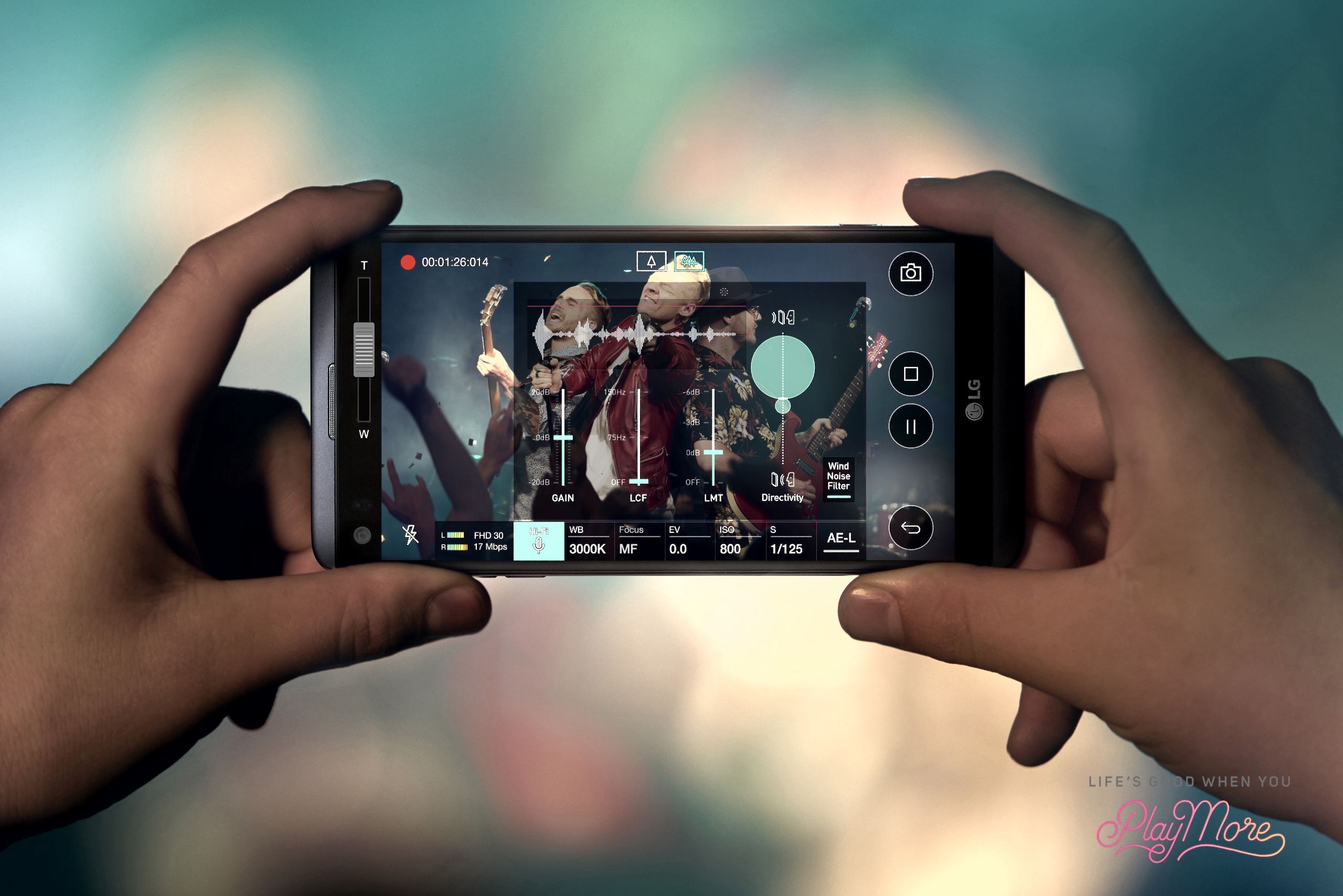 Camera-wise, the two 5-megpaixel front-facing cameras found on the V10 have been reduced to one unit with a wide-angle lens. Two cameras are now found on the rear with a conventional 16-megapixel unit teamed with a wider-angle 8-megapixel unit, much like the implementation we found on the G5. It is there that LG integrates three autofocus mechanisms: laser, phase and contrast detection. The phone determines which of the first two to use while the latter is implemented to refine racking.

LG continues to provide the most advanced robust photo and video viewfinder software for smartphones. In addition to audio level adjustments for video recording, there’s also a Low Cut Filter and a hard Limiter for removing background noise and to kill excessive gain that will prevent clipping. The chaebol also boasts about the inclusion of Qualcomm’s Steady Record 2.0. EIS 3.0 technology is supposed to reduce latency between gyro-image syncing down to 50 milliseconds. Digital stabilization is added for post-processing, pixel adjustments and distortion reduction. The main 16 megapixel camera is also optically stabilized.

Korea will see the V20 in “Titan,” “Silver,” and “Pink” starting this month. Local retailers will announce their own carriage plans “in the weeks to come.”