This is the LG G7 ThinQ: another heavyweight enters the ring (video, pictures, camera samples)

The LG G7 ThinQ is both an evolution of the LG G6 predecessor, as well as an innovation in keeping up with 2018 smartphone trends. It packs powerful specs, good cameras, and on paper it has everything it needs to pick a fight with the Galaxy S9, P20, iPhone X/8, and the rest of the heavyweights.

14 months from the introduction of the LG G6 at the 2017 MWC, the South Korean company decided it’s time for the 2018 flagship to enter the ring and fight the competition. It’s not an easy fight, as the main opponents surely pack a good punch. They are the Galaxy S9/S9+, the P20/P20 Pro, iPhone X/8/8 Plus, the upcoming OnePlus 6, and HTC’s U12, just to name a few. Will the LG G7 ThinQ have what it takes to establish itself on a market that seems to be more and more competitive each year? We went hands-on with the LG G7 ThinQ, and we think that it does.

The name of the game lately is differentiation through unique features. The iPhone X introduced the notch to the masses. The Galaxy S9+ brought the variable aperture camera. The Huawei P20 Pro placed three main cameras in your pocket. All of the big names are making sure their smartphones are doing everything right, in addition to having a specific feature that’s unique to them. 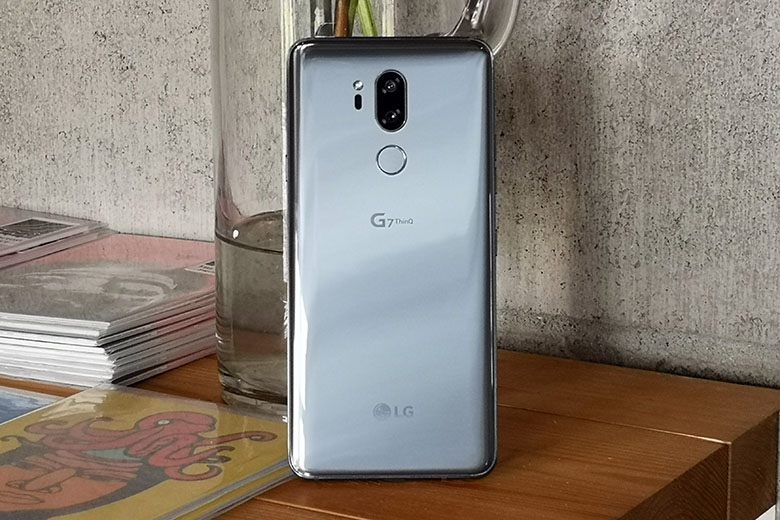 LG continues to believe in the dual-camera approach, but one that involves a wide-angle secondary camera, and was hard at work these past 14 months at perfecting it. It’s their differentiator (or at least one of them, the main one), and this year it’s better than what we’ve seen before, with a larger sensor and a distortion free field of view lens.

Whether a feature, a compromise, or a trend that needs to be followed, the notch has been adopted by LG, granted, with options to concealing (hiding) it, in a unique way. Additionally, other features like the Boombox speaker, Super Bright Display, and Super Bright Camera (more on these later) are all bullet points on a phone salesman’s pitch list for reasons to buy this device.

But what is the LG G7 ThinQ really all about?

The LG G7 ThinQ looks and feels just as good in the hand and in real life as you’d expect from a premium flagship phone. Tight tolerances, Gorilla Glass 5 for both front and back, curved design for ergonomics, IP68 water and dust resistance, as well as another differentiator: MIL-STD 810G compliance. The colors it will be available in are New Platinum Gray, New Aurora Black, New Moroccan Blue, and Raspberry Rose. 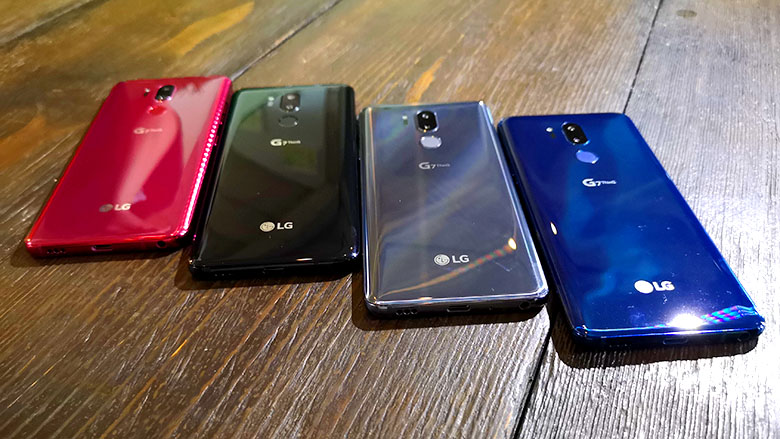 Powered by a Qualcomm Snapdragon 845 chip, it packs 4GB of RAM (6GB in Korea) and has 64GB (128GB in Korea) expandable storage for your multimedia needs. With dual 16MP shooters on the back, an 8MP front-facer, loud speaker performance, a great 6.1-inch QHD+ display, 3,000mAh battery and Wireless Charging support, it’s got the internals to match those on its direct competitors. It has a dedicated Google Assistant button on the side to allow you to talk to your phone either by pressing or holding it; you can’t remap it at the moment, but we’ve been told you’ll be able to at least disable it. 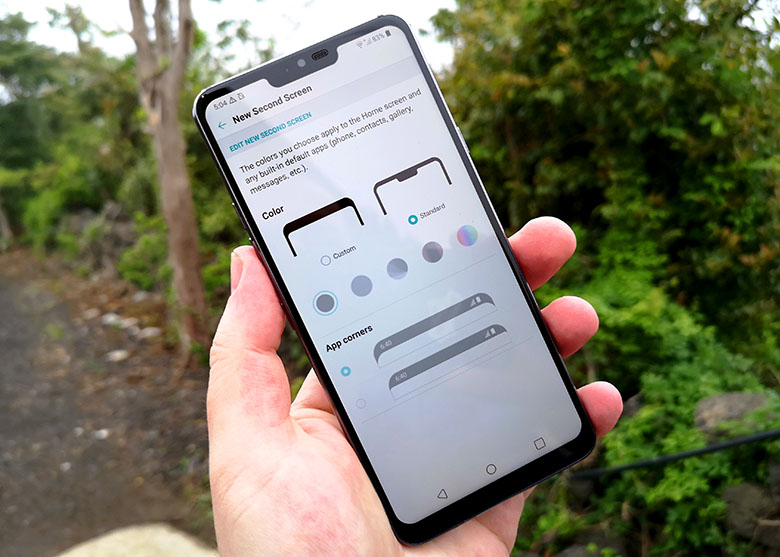 The Super Bright Display is able to produce 1,000 nits of brightness (for three minutes, being limited by heat and battery life reasons), and to reduce power consumption by 30% at the same luminance. LG achieved this by going with an RGB-W IPS LCD panel (where W stands for “white”, its purpose being brightness). The 19.5:9 aspect ratio generated by the 3120 x 1440 resolution is achieved by employing a notch, one that LG calls the “New Second Screen” (building on the “second screen” introduced on the V10). The cutout on the New Second Screen (the notch) will be concealed/hidden by default but LG gives plenty of customization options in order to show, conceal, or even customize it to your liking.

As far as the panel’s performance is concerned, in addition to the 1,000 nit brightness, the screen aims to help readability in bright outdoors, and it offers tuned TV experience modes for specific scenarios like Auto, Eco, Cinema, Sports, Game and Expert.

The Boombox speaker has been built from ground up by rethinking how the phone generates and emits sounds. The entire back of the phone — the water resistance chamber and seal to be more specific — is acting like a resonance chamber for the speaker, instead of it being limited to the usual housing this component comes in. The advantage is that with a resonance chamber 17 times larger than on other products it is able to produce sounds almost twice as loud, in addition to these sounds being amplified once the phone is being placed on a surface (preferably wooden, where the surface takes over the sound vibes and amplifies them).

The disadvantage is that exactly because of this new approach we are left with mono (down-firing) sound that can be muffled (like in the case of any other phone that uses this approach). Additionally, because the phone itself is the resonance chamber by opening up the speaker, this speaker is now exposed to damage with nothing left to protect it; you should be fine until you break the seal (either by opening it up, cracking the back, or flooding it, in which case you’ll lose the Boombox feature, but not the sound itself, we’ve been told). 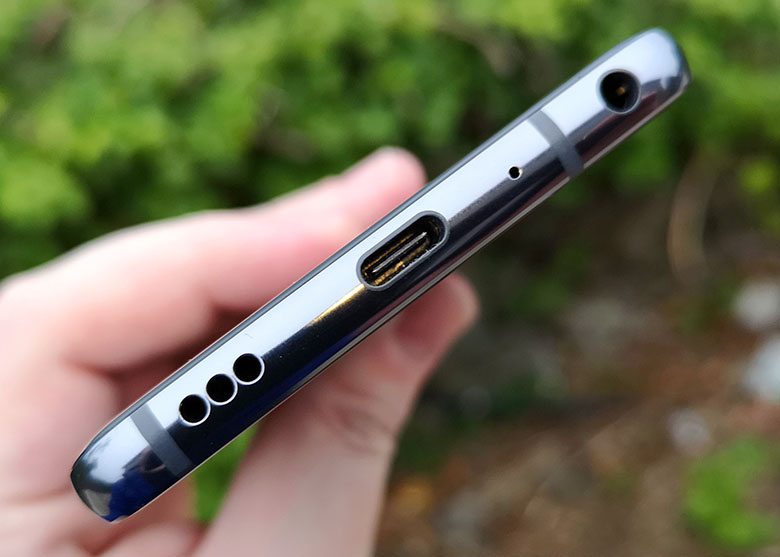 Audiophiles will appreciate the same (great) Quad DAC setup as on the V30 with DTS.X3D audio rendering on headphones through the dedicated headphone jack which LG decided (thankfully) not to remove.

From a pure hardware/specs perspective, there’s little to nothing to complain about when it comes to the LG G7 ThinQ. We initially had two concerns related to the display and battery. We were wondering why LG decided to go with an LCD screen instead of an OLED display, especially that there’s a notch which can be concealed, and the OLED’s capabilities are able to produce true blacks in order to achieve this. Luckily, the LCD panel is really good at doing it, so it’s really not a big deal. Second, LG made it clear that one of the main differentiators between its V and G line-up are the screen technologies employed (OLED for V series, LCD for G series).

Our second concern is the battery rating. At 3,000mAh, it matches the battery on the Samsung Galaxy S9 (not the S9+), and the one on the Huawei P20 (the P20 Pro has a huge 4,000mAh battery). We can’t really opine on the battery life of the phone, but we’ll make sure to let you know in our full LG G7 ThinQ review, after extensively testing it out. 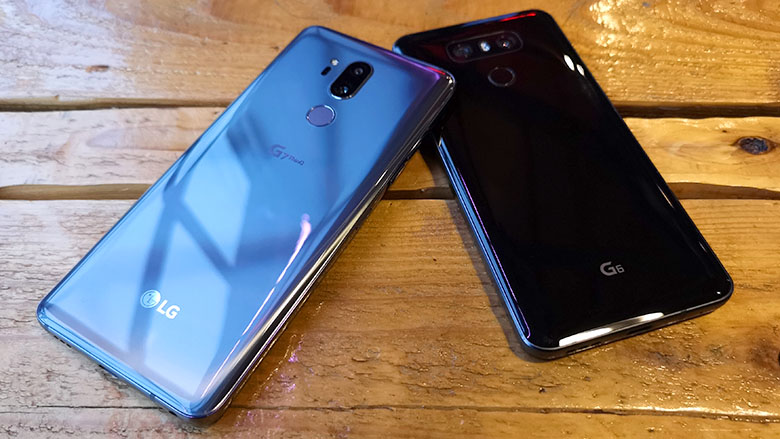 One thing that has fundamentally changed is the power button. LG said it was listening to its customers when it decided to walk away from its tradition of a joint power button and fingerprint scanner on the back, like on the LG G6, and many previous models. In the case of the LG G7 ThinQ, there’s a new power button on the side, living alone on the right hand edge, that has one purpose: to act like a power button. The fingerprint scanner on the back, under the cameras, is just a sensor with no way to push it down, but it can still be used to quickly unlock the device and turn the screen on while at it. 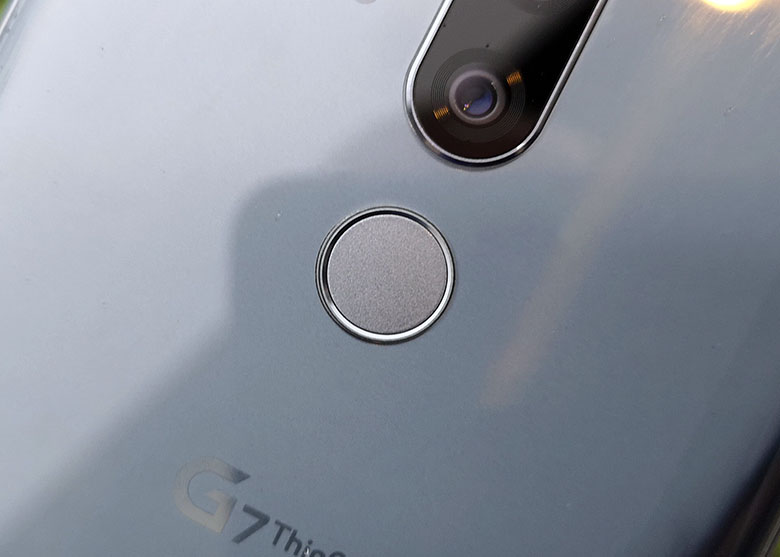 As it is by now obvious from the name, LG is really pushing its ThinQ branding across all of its main products. AI is the future and the LG G7 ThinQ (tongue-twister or not) is heavily relying on it in order for the software to make some of the decisions for you.

AI CAM aims to select the right camera settings by recognizing the shooting scenario. After analyzing the frame, the software chooses one of the 19 preset modes automatically, by tweaking filters and brightness, as well as recommending the wide-angle lens and Super Bright Camera mode, as necessary.

This Super Bright Camera mode aims to produce four times brighter images in low light scenarios by using a slower shutter speed, after which the software does some pixel combining tricks in order to offer you brighter results. This approach is similar to Huawei’s pixel binning used on the P20 and P20 Pro. 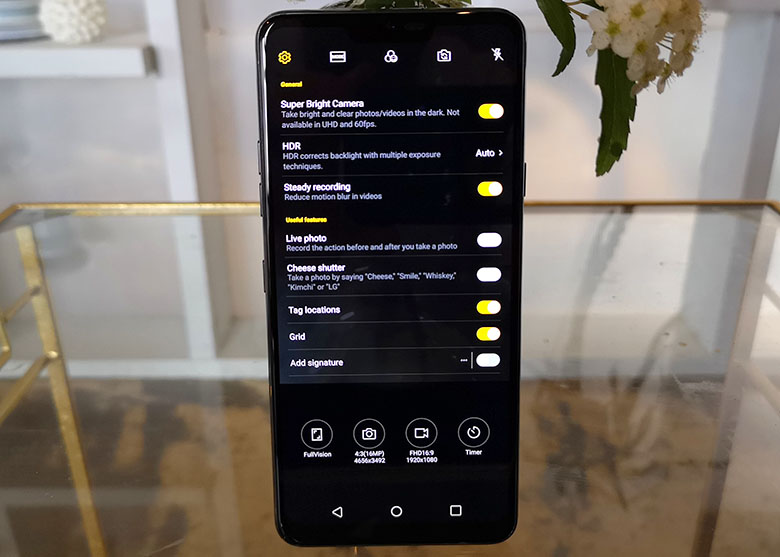 The Super Wide Angle Camera now has a 16MP sensor, but a smaller field of view, at 107 degrees. The reason behind it is simple: LG wanted to eliminate (and succeeded) the camera distortion present on its previous models when shooting wide-angle scenes. They also managed to maintain the same angle for Portrait photography, which is something that competitors are yet to offer.

Far Field Voice Recognition increases sensitivity by 35% compared to other models, in order to make your dialogue with the phone/assistant easier. A dedicated key on the side is used to call on the Google Assistant. LG is also allowing you to call it by different names, as you could with old Motorola phones. There are also custom commands for you to operate different features in the phone, and, while you can’t remap the button, you’ll be able to disable it.

The LG G7 ThinQ will also be one of the first devices to get upcoming Google Lens features. With Google Lens the phone will be able to search and deliver information using AI and computer vision, whether it’s information on objects (such as landmarks, plants, animals, or books) as well as identify text, visit a website, add events to the Calendar, and so on. 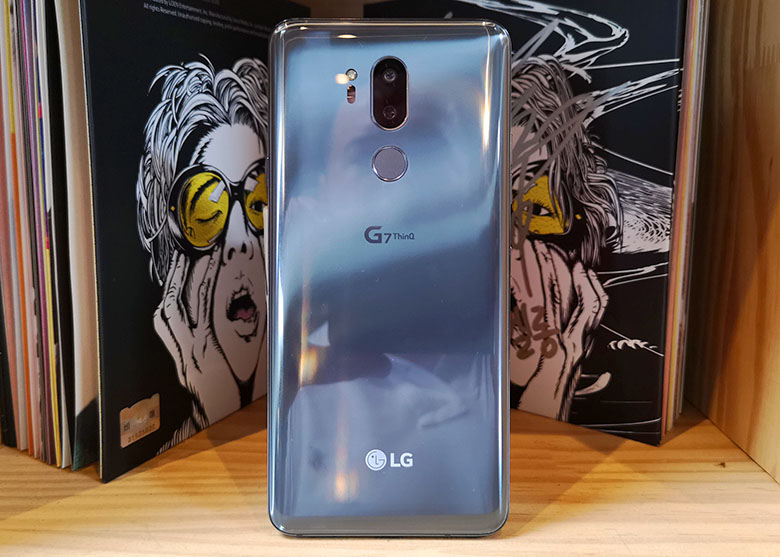 On paper the LG G7 ThinQ has everything it needs in order to survive against the competition and win the fight for your choice. In reality, we’ll have to spend more time with the device as our LG G7 ThinQ review process starts now. It has the looks, it has the brains, it’s durable, packs a duo of great cameras and seems to tick all the main points required by a true 2018 flagship.

We’ll put the phone through our extensive tests for the upcoming LG G7 ThinQ review. From performance to camera, from Software to User Experience, all the way to network performance and battery life, we’ll make sure to carefully assess everything the phone has to offer and bring you our conclusions. We’ll also hopefully be able to answer the question whether the LG G7 ThinQ is worth buying, why, and how it stacks up against the competition.

First some housecleaning: during our brief three-day usage period with the phone in Seoul and Jeju Island, we were told several times that the software on the units we used was not final. As a matter of fact phones were updated several times per day, so camera performance can only get better. Also, please note that these samples included here are not used to judge the camera performance of the device. We’ll get to that during our full review, but until then, think of these as a preliminary teaser of what the phone can do.

The phone will be launched on March 26.

The upcoming India version of the vivo v19 has just leaked in these real-life photos, and reports suggest minor differences.