Also, what will basically be an aux cord for the Essential Phone into your car stereo system — since, you know, it lacks a 3.5mm headphone jack.
Published 19 August 2017, 01:20 EDT

Andy Rubin revealed to Bloomberg that Foxconn manufactured the Essential Phone. In fact, the co-creator of Android is all too aware that it looks pretty similar to a certain Sharp phone that recently debuted in China — we believe it to be the Aquos S2. He said that he sent a pretty colorful email to Foxconn chairman Terry Gou.

He’s probably also had some pretty intense interactions with Sprint suits as the delays piled on for the Essential Phone’s launch. A number of bugs kept the engineering team on the Essential side busy, but the exclusive US carrier also had some software testing and certification to do. While Rubin insists that he’d “go and create my own distribution channel” if the networks didn’t come to play, it’s still a big ask in 2017 to ask even a niche market to do its research about an upstart brand. Fortunately, this relationship that began sprouting early this year seems to have fruited nicely.

Being a startup is hard. Sometimes, you’ll lose a few people along the way. But one big omission in Rubin’s chat is any talk about the departure of several company executives.

Instead, he reminded us of his mission: Rubin said that he recently witnessed the tiresome scene of a couple out having a meal, except they’re not looking at each other, but rather, their phones for minutes on end.

“We all lived happy lives before we had always-on internet,” he said.

He believes that Essential is in the caterpillar stage of flight to battle skyward warriors Apple and Samsung in providing technology with a better mission right from the gate: artificial intelligence and the algorithmization of mindless habits.

“If I can get to the point where your phone is a virtual version of you, you can be off enjoying your life, having that dinner, without touching your phone, and you can trust your phone to do things on your behalf,” he says. “I think I can solve part of the addictive behavior.” 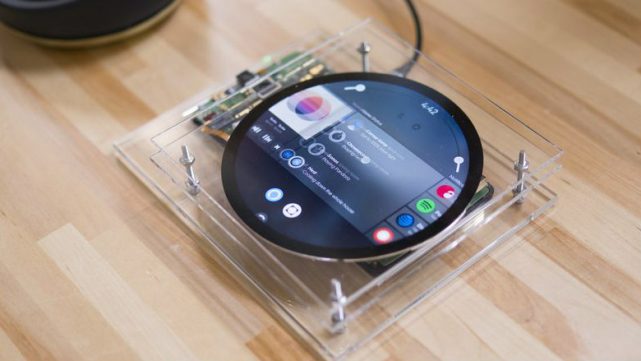 That’s where the Essential Home hub, which is said to interoperate between Google Assistant, Cortana, Alexa, and any other service out in the market now and in the future, really goes to his vision. Rubin isn’t really interested in the whole “speaker” interface, though, as photographed prototypes show, a fully-featured, touchscreen-based software UI would give us the option to stay where we’ve been for a long time now — stuck to a screen.

Modular accessories may or may not help in selling Essential Phone, but in simplifying things, the company has brought a magnetic attachment down to two pins. It’s good for a 4K 360-degree camera and it will also be good for two more subordinate devices currently in testing: what’s essentially an auxiliary audio port for cars — as there’s no 3.5mm jack, having the USB-C port handy would be nice — and “the world’s smallest 3D laser scanner,” according to Bloomberg. While Rubin does give a throwaway line about how self-driving cars use laser feedback for measuring distance, we’re not sure if this will take us to augmented reality or better camera focusing technology or something else.

Andy Rubin is all too aware that his phone looks like other phones out there. And he’s okay with that — for now.

“So?!” he recalls telling venture capitalists. “We’ve identified a business opportunity. We think there’s room for two of us.”