This whirlwind IFA 2014 week is continuing today with another bombshell, this time from Motorola. The company has just gone official with the new Moto X, its stylish successor to last year’s well-reviewed Moto X. The device stands for about the same things as its predecessor, but there are a couple crucial changes that may or may not make the phone worth the buy. Let’s take a closer look.

The new Moto X comes with a 5.2-inch full HD (1920×1080) display, and can be customized to your liking through Motorola’s Moto Maker device customization service – which, by the way, now offers genuine Horween leather along with the woods and other materials we saw on the original X. Motorola has also listened to consumer requests by throwing in front-facing speakers, too, which sound fairly good from our initial impressions of them. The camera has also received a bump, jumping to 13MP on the back with support for 4K video capture.

There’s the latest version of Android on the market, Android 4.4.4, running on this phone, and Motorola is promising a prompt update to Android L once Google drops source code onto AOSP this fall. The whole software experience is pretty unadulterated, and we’re pleased that Motorola isn’t adding in useless features and an unnecessary heavy UI skin. Touchless Control has been expanded to allow for custom key phrases, and this even now integrates with third-party apps such as WhatsApp, YouTube, and Facebook.

The new Moto X will be available in a select few countries – namely, those are certain areas in North America, Latin America, Europe, and Asia – by the end of the month. With a new two-year contract agreement, the new Moto X will be available for as low as $99.99 (depending on which carrier you choose to purchase it on). If you buy it off-contract, you can nab one for $499.99 from Motorola’s website.

Stay tuned for a hands-on later today, and check out the other posts that have just gone live as well in order to learn more about all of Motorola’s announcements for the day. 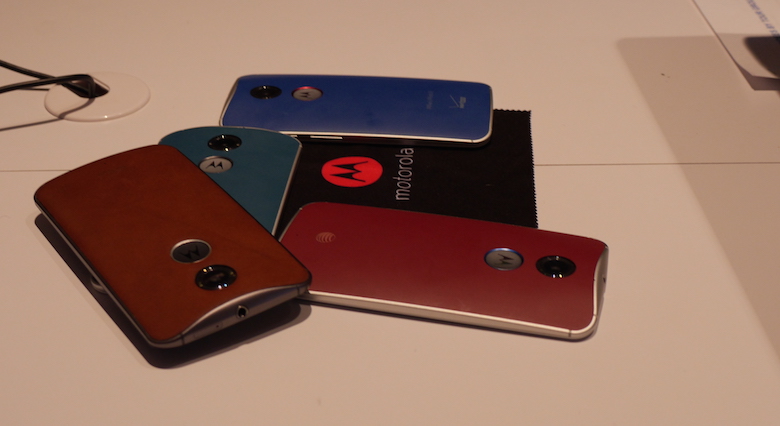