The new Moto G from Motorola goes official, a great phone at a great price

Motorola has just unveiled a powerful new affordable Android in the form of the new Moto G. Learn what exactly this new kid’s all about.

Motorola’s most popular phone ever was the Moto G, because with that phone, the company proved that cheap hardware doesn’t have to equal terrible performance. As evidenced by our review of that product, we were quite fond of it, and some of us wouldn’t even mind using it every single day in place of a powerful flagship. Now the Moto G is getting a successor, as the new Moto G looks to improve even further upon last year’s canvas.

There’s a 5-inch HD screen, front-facing speakers with stereo sound, a quad-core processor, and all-day battery life, so this should work just fine as an entertainment powerhouse. And that doesn’t mean Motorola’s software enhancements, which we personally find to be quite handy, aren’t present: Moto Alert, Motorola Migrate, Motorola Assist and more are all available on the new phone.

The rear camera has an 8MP sensor, while the front-facer comes in at 2MP. There’s a microSD card slot as well, in order to expand the 8 or 16GB of inbuilt storage. It comes with Android 4.4.4, though Motorola is guaranteeing a prompt update to Android L for all buyers.

The new Moto G is also fairly cheap in terms of smartphone pricing standards, clearly identifying itself as the phone for the next billion recruits to the smartphone lifestyle – it’s only $179.99 for the base-model 3G variant without a contract. While it looks like it only comes in one color on the front, Motorola is selling a variety of Motorola Shells (which you can see below) in order to let buyers be unique. The new Moto G will initially be available in the US, India, France, Brazil, UK, Spain, and Germany, with it being available on Motorola’s official website in many of these markets. 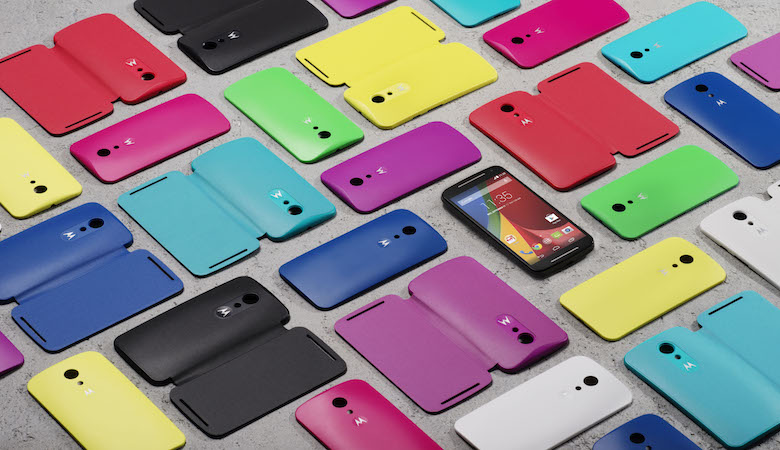