I never thought that I would actually say that. Innovation in the realm of USB cables doesn’t really seem possible. Sure, around the turn of the century there were some retractable Micro USB cables that had nice spring-loaded cylinders that would automatically wrap up the wire for easy storing. That was pretty nice.  But look at what Plantronics did for their just-released Explorer 500 Bluetooth headset!  Sure the Bluetooth headset is pretty nice. It’s got HD voice, multilingual English, French or Spanish notifications, smartphone speech interface access, and noise/wind cancellation along with a very light form factor and 7 hour talk time… but what are you going to do with it when you don’t need to use it?

Plantronics decided to put some innovation into the USB charging cable and turn it into a clip-on strap.  It’s totally genius.  Some Bluetooth headsets simply have a Micro-USB port for charging… you still need a bulky MicroUSB wire to charge it, which you probably already have for your phone.  Other Bluetooth headsets come with sort of a docking station that might have an extra larger battery inside that you can charge separately are carry with you. You can keep the headset in the larger docking station to keep its battery charged for when you need to use it. Some of those big docking stations even include wireless charging (like the Nokia Luna), but the headsets themselves are generally too small for wireless charging.

For the Explorer 500, Plantronics decided to invent a new Micro-USB wire that doubles as a method to store your Bluetooth headset.  It’s a rubber strap that you can hook on to something like a belt loop or a handle on your bag.  It’s small and tangle-free enough to keep in your pocket without it getting filled with knots and merging with your key chain. Although, you could very easily clip it to a key chain loop if you wanted to. 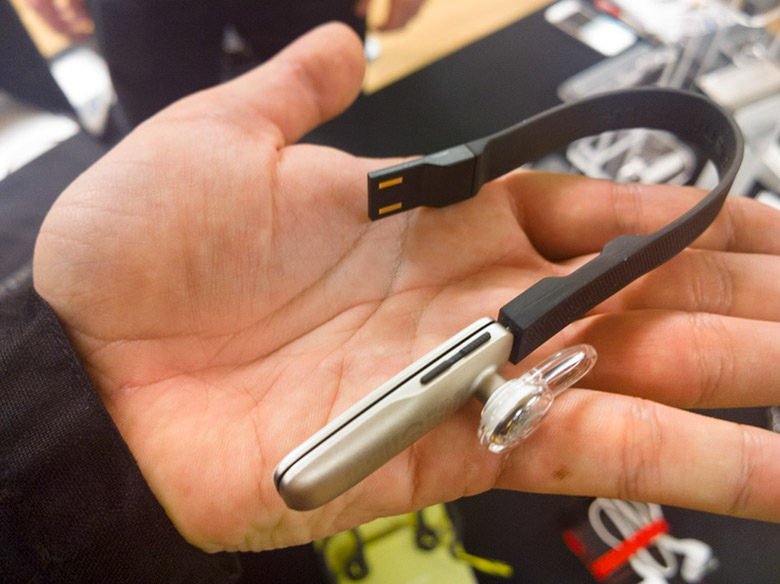 The coolest thing is where the strap loop attaches itself via magnets.  That end is a male full-sized USB connector that you can plug into any PC or USB charging adapter.  I’m not sure if it supports transferring data as well, but for a portable charging solution that works with any Micro-USB-chargable device, this is pretty awesome. Sometimes the little things make a big difference.

Unfortunately, the Plantronics charging strap is only sold with the Explorer 500 Bluetooth headset at this time.

How do you normally carry your USB charging cable? Jumbled up in a wire mess and stuffed into a bag?

The Apple Pencil 2nd generation is compatible with the latest 12.9-inch iPad…