At least, on benchmarks, anyways. But the data shows that performance on the iPhone 5s stays relatively consistent between multiple iOS versions.

As far as FutureMark is concerned, Apple is not forcing obsolescence onto older iPhones through poorly optimized software updates. The company has released a tranche of CPU and GPU performance data for the iPhone 7, iPhone 6s, iPhone 6 and iPhone 5s with tests done on its own benchmark platform, 3DMark.

If you’ve been complaining that the iOS 11 update has made things intolerably slow for you on one of these phones, you may have good reason to be peeved, but actual data shows that typical processing remains close to or above what was recorded 17 months and two versions of iOS ago. Both CPU and GPU records were run with the Sling Shot Extreme Physics test. Monthly logs go back to April 2016 with iOS 9. 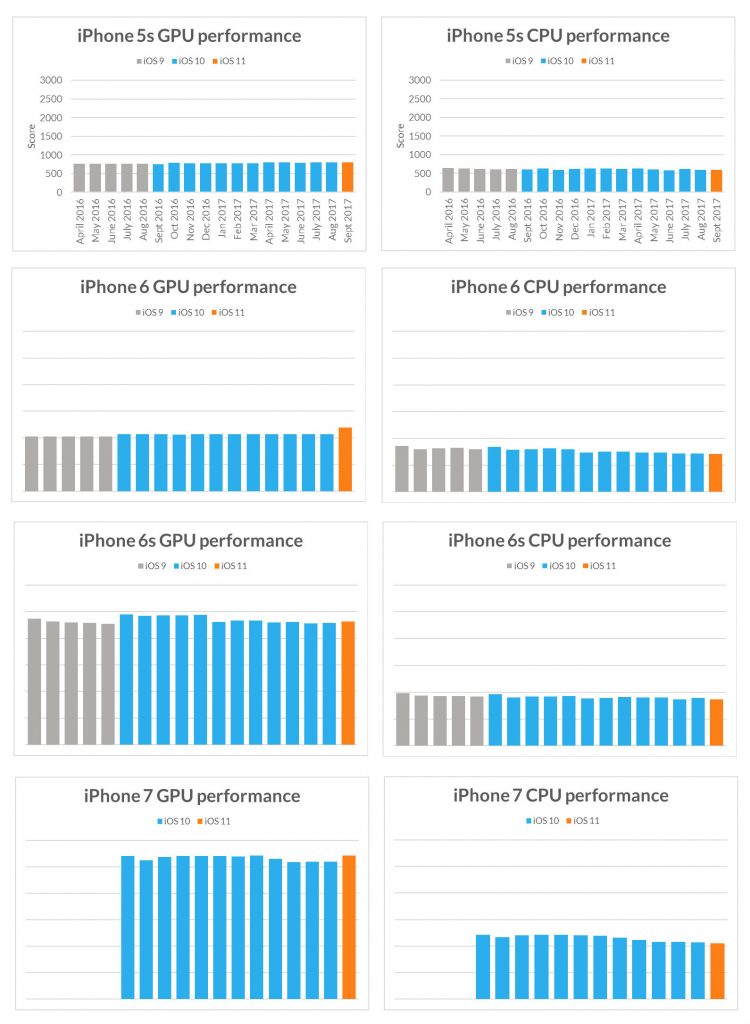 Apple doesn’t seem to be intentionally slowing older phones down on new software. But it’s not in your head, though: there may be more individual events that will snag those processing cores up as they age. And benchmarks don’t necessarily reflect real-world experience.

[…] there are some factors that might affect people’s perception of performance after updating an older device with a newer version of iOS. An update might add new features that use more resources or require more processing power. New apps developed for the latest models might not run as smoothly on older devices. Conversely, apps designed for an earlier version of iOS might not take full advantage of optimizations in the latest version.

Yes, there’s always a shinier new thing you could buy. It doesn’t help being frustrated about how slow that iPhone or any phone can be sometimes. All you can do is stick to best practices like not closing apps every time you’re done with them and keeping brightness on one, conservative setting as often as possible.