The promo shows off some Googlers jumping up for a photo, only for it to not be taken. Darn “Storage Full” box. Well, what’s the phone, there?

Google continues its promotional campaign for its Photos service, but with one big detail that feels quite out of touch.

The Instagram clip shows some Google groupies ready posing for the ubiquitous “freeze jump” shot when just as the phone’s about to take the photo, an iOS prompt tells us that the phone’s storage is full. We pull back from the screen to see a hand flick away the prompt, right past the Google Photos pinwheel logo.

“Never run out of storage again with the free #GooglePhotos app for Android and iPhone,” says the descriptive post.

But you can’t tell us that that’s an iPhone. And it’s not an HTC 10. There are no front-facing buttons and all the 2.5D glass curve shimmers tell us there’s some Nexus design going on here. We think.

Unfortunately, a hint’s all we’re getting — we don’t see that unique backside that’s been rumored and rendered. And we have a couple months more to wait before anything even close to being related to HTC rears its head(s).

Update: Here’s a screenshot from the original minute-long ad. It uses a Nexus 6P. Nothing new. But this stuff is fun to poke at. 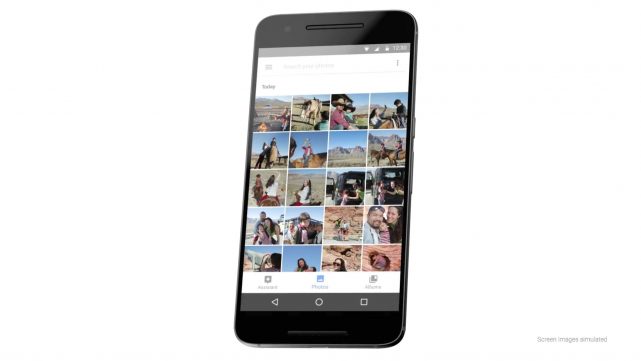