For smartphone shoppers on a budget, TextNow Wireless is a great option

Even in 2015, one of the worst parts about buying a smartphone in the US is the associated wireless plan. Oftentimes, that plan can work out to even more than you pay for the smartphone itself – and even if it’s not, it represents a huge reason why many have stayed away from purchasing a smartphone. The big four carriers don’t offer buyers much of a deal. Going with T-Mobile, easily the most affordable of the bunch, still has you paying at least $50 a month even if you’re not using much of the allotted minutes, text messages, and data. So how do you get around that? An MVNO (mobile virtual network operator) has always represented one of the better options, and we took TextNow Wireless for a spin over a couple weeks to see how it stacks up.

Our TextNow testing was performed over about two weeks in Southern California using a first-gen Moto X loaned to us by the company. TextNow piggybacks on Sprint’s 2G, 3G, and 4G LTE networks (which one you get will depend on the fastest network available to you at any given time), though it favors WiFi whenever possible – it can make calls and send texts over WiFi/voice-over-IP as well as on Sprint’s own network. Coverage will vary widely based on where you live, but from my results in San Diego, I’m not that impressed.

Using the device at my own house, which Sprint states is a 4G LTE-covered area, I find myself on 3G 99% of the time; once in a while, I get kicked up to one or two bars of LTE. For perspective, my AT&T, T-Mobile, and Verizon phones all receive strong LTE signal in my area. Again, this will mostly depend on where you’re situated, but be mindful that Sprint’s network likely isn’t the best option. If you’re going into TextNow, you’re not here for the coverage.

Most of the account management you’ll do –as well as text messaging and calling– is in the TextNow application. You can make changes to which plan you have, see how many credits you have remaining (as well as how much data you have used in the month so far), as well as send and receive text messages and phone calls. The app experience itself is quite neat and easy to sift through – I didn’t find many quirks with the experience. Handing off between WiFi and mobile data was quite seamless as well. A couple times, though, I ran into an issue where a certificate error popped into my notifications for a couple minutes (notifying me of a connectivity error), but this looked to be an isolated incident.

One of the coolest parts about TextNow is that there’s a web companion app, where you can send and receive text messages as well as take and make phone calls. Everything worked very smoothly, and keeping the TextNow tab open on my laptop throughout the day made life a lot easier on the connectivity side; I no longer had any need to have my phone out for a quick couple text messages. This is a luxury even a lot of the big carriers won’t afford to you – it easily made my experience with the service a lot nicer.

Let’s talk devices. While you can bring your own Sprint LTE phone over to TextNow, the company urges you to not take this route, stating on its website that “all calls and texts must be made using the TextNow app; your native phone and messages applications will not work,” that “calls may drop when you switch between networks and WiFi connections,” and that “your phone can only use 3G and 4G networks to place calls (no 2G is available).” So if you’re looking to avoid these tradeoffs, you’re going to have to purchase a device straight from TextNow, of which there are few.

Let’s finally tackle the juicy part: pricing. TextNow’s rate plans begin at just $19 a month, which will net you unlimited talk and text across the US and Canada, as well as 500 MB of high-speed data. If this is all you need, beating TextNow is a terribly hard proposition for other carriers; a comparable plan from T-Mobile will run you $50 (and more with tax – the TextNow figure has tax already accounted for). The plans go up in pricing from there, in four separate tiers bizarrely named after the drink size selections at Starbucks. Grande costs $27 for 1GB of data, Venti $40 for 2GB, and Trenta – the tier I was forced to use, given my heavy phone usage habits – gives 4GB for $60. 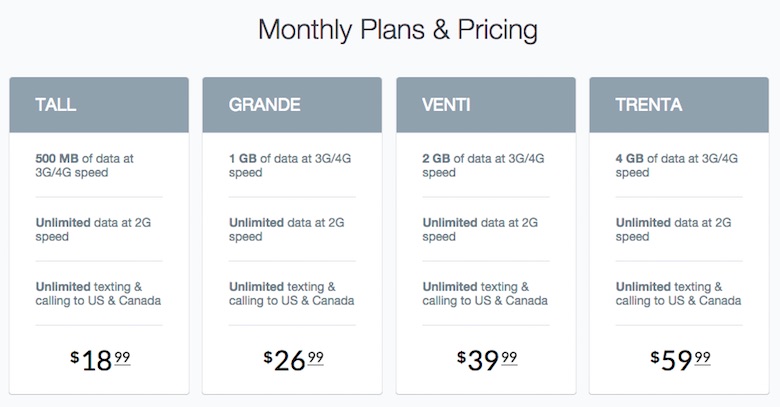 These plans aren’t lacking whatsoever in affordability; you’ll simply need to consider the tradeoffs when making the decision to go with TextNow or not. Is having a reliable web interface and a cheap rate plan worth dealing with a slim phone portfolio and inconsistent coverage? If you’re able to answer that question with a “yes,” you’ve found your match. TextNow offers the right service for the right price for some people, and if you’re a person who simply needs a smartphone – but doesn’t have to hammer its data allowance outside an area with WiFi – you may want to give it a shot. I, for one, can’t quite live with just 4 or so gigabytes of data a month, and my active lifestyle means that spotty coverage is something I can’t live with either. But for an older person I know, or perhaps a young student, the combination of price and features would make it a quick recommendation.

Learn more about TextNow Wireless at its website here.

A not-too-subtle naming aside, iTest is a medium for Samsung to let iPhone users get a taste of Android with the Galaxy flavor.