Forget smart bulbs or smart outlets: what about a smart battery for portable devices?

Once you realize how easy it is to start connecting devices around your home to your smartphone, the temptation to keep adding more can have a tendency to get away from you. Maybe it starts simply: a smart light bulb here, a remotely controlled outlet there, but before you know it you’ve got window shades that are rolling up and down at your phone’s bequest, a thermostat that’s sending you air-quality reports over WiFi, and doors that remotely lock and unlock themselves on demand. And while the sky’s practically the limit for home control and automation, what happens when you want to extent that control to nominally portable devices? Today we’re hearing about one option for doing just that, as we spot a deal on the Tethercell AA Smart Battery Adapter. 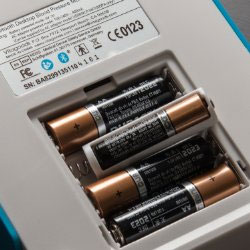 When we’re dealing with stationary devices, a “dumb” product can be rendered “smart” quickly and easily by implementing a way to turn it on and off remotely – usually by means of an adapter attached to its power cord. But what do we do when we’re talking about portable electronics that keep their power supply tucked within?

The Tethercell AA Smart Battery Adapter is basically a tiny sleeve that slips over a AAA battery (it has to be smaller than AA since the adapter itself takes up space) and lets your iPhone turn the battery on and off over Bluetooth. And since batteries are often wired in series, one adapter is all you need to effect control over power for an entire device.

Just like with wired smart appliances, you can then use your phone to remotely control power for the portable device on demand, as well schedule power-up and -down times in advance.

One note of warning, though: it sounds like this adapter will only work in portable electronics with “hard” on/off switches – that is, you can leave them in the “on” state and they’ll immediately spring back to life when you insert batteries. Devices that instead require the momentary press of an “on” button or otherwise need you to crawl through menus to operate them won’t be great fits for this adapter.

Normally $40, Amazon has a two-pack of Tethercell AA Smart Battery Adapters available for about $20 right now. From reviews, it sounds like the iOS app leaves a bit to be desired, so maybe think twice before purchasing. Really, we’re just interested to see that a solution like this exists at all.

Source: Tethercell (Amazon)
Via: 9to5 Mac

S Pen has remained the Galaxy Note family’s defining trait, but will it change in 2021? Does the Galaxy S21 series support the S-Pen stylus?