Can the Tag Heuer Connected convince smartwatch buyers who may have scoffed at the Apple Watch that there really is a luxury market for such devices?

Tag Heuer has been talking about smartwatches for months now, and all the way back in March we saw the company confirm plans to introduce its first such model, an Android Wear device. Over the months that followed, we started to pick up new details about the watchmaker’s plans for this model, including a design that would borrow heavily from its existing models, and a price tag that would seem right at home with the the premium prices Apple helped introduce to the smartwatch space. Last month we finally got an ETA for the project, with a big launch event scheduled for today. Now Tag Heuer’s complete vision for its smartwatch is finally clear, and it’s doing things just a little bit differently from everyone else out there.

One of the problems the luxury smartwatch market has struggles with is that of longevity: sure, shoppers have no problem forking over four figures (or more) for a premium wristwatch, secure in the knowledge that when properly cared for, it should retain its value and attractiveness for decades to come. In a world where a three-year-old smartphone might as well be a doorstop, how can smartwatches possibly hope to compete with that luxury sector? 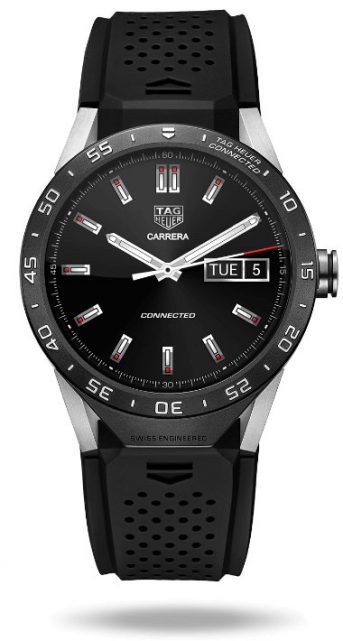 Tag Heuer may just have the answer with the Connected watch. On day one, shoppers who take home the Connected have themselves a modern Android Wear smartwatch. But inevitably, technology will progress, and even with regular Android Wear updates, today’s model will start to feel like a relic a few years down the road.

When the day comes that your Tag Heuer Connected watch just isn’t satisfying your smartwatch needs anymore, you can trade it in (Update: and reportedly pay an additional $1500 upgrade fee – full details are still rolling in) for a traditional non-smart Tag Heuer watch – one that should keep its appeal for years.

As for the Connected smartwatch itself, it’s crafted from titanium and sports a 1.5-inch circular display with a 360 x 360 transflective LCD screen protected by sapphire crystal. It’s powered by a 1.6G GHz dual-core SoC, and has a 410mAh battery, 1GB of RAM, and 4GB of internal storage. It charges via a conductive cradle, and Tag Heuer says users can expect a minimum of 25 hours of use on a charge. The watch measures 12.8mm thick, has a mass of 52 grams, and will be available in a choice of seven strap colors (adding 29 grams a piece).

Sales of the Connected smartwatch begin today, priced at $1500.