Tablet shipments in 2015 are projected to drop compared to 2014 by almost 15 percent, with Apple the enduring leader of the struggling industry segment.
Published 28 August 2015, 05:33 EDT

The bubble is about to burst for tablets, which have rapidly grown in recent years, but are faced with a crucial identity crisis as phablets threaten their very existence. Who needs an often bulky, non-cellular-enabled PC lacking the physical keyboard and productivity of conventional laptops?

According to Taiwanese research firm TrendForce, just 163 million people in 2015. That includes estimates for the year’s first half and H2 forecasts, and would see the global market drop by a staggering 14.9 percent. 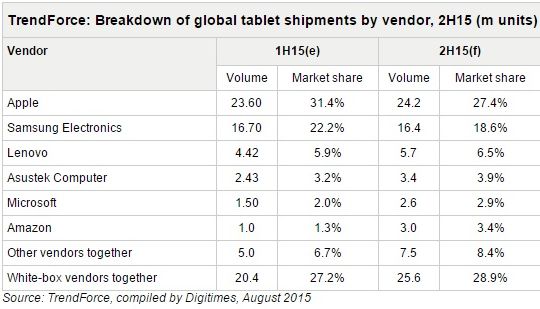 Rumored to postpone or even altogether cancel the iPad Air 3, Apple comfortably reigns over arch-rival Samsung in the OEM ranks. After allegedly selling 23.6 million iPads in H1 2015, Cupertino is projected to push an additional 24.2M copies out the door in H2. The grand total would sit at close to 48 million, compared to roughly 33 for Samsung.

In third place, Lenovo should surge from 4.4 million shipments and a 5.9 percent share between January and June to 5.7M and 6.5 percent respectively in the July – December timeframe. Next up, Asus, Amazon and Microsoft are themselves tipped to grow, to 3.4, 3 and 2.6 million, so at least the trend is encouraging, obviously sustained by your typical holiday season gadget demand increase.

It is expected to be a re-branded variant of the global Redmi Note 9 Pro.