T-Mobile is the new industry leader in both 4G and 3G download speeds, as well as 3G latency, according to wireless coverage mapping firm OpenSignal.

Mere weeks after busting Verizon’s balls and accusing it of using incomplete data and biased analysis to claim its network was better at everything from coverage to download speed, T-Mobile prevails in an exhaustive comparison of America’s big four carriers put together by OpenSignal.

The seemingly independent company collected over 376 million datapoints from close to 182,000 users between October and December 2015, recording normal 3G and 4G consumption habits in normal usage, both indoors and out, in big cities and the countryside.

Thus, OpenSignal states, its measurements represent “performance the way users experience it”, which makes T-Mo’s general victory that much more impressive and worrying for the two operators actually leading in subscriber counts.

Of course, it wasn’t an easy win for Magenta, at least not in average LTE download speeds across the nation, where Big Red lost the gold medal by a ridiculously small margin. Namely, T-Mobile averaged 12.26Mbps rates in “real life” conditions, while VZW tallied 11.98, both figures eclipsing AT&T and Sprint’s sub-par scores of 7.93 and 6.56Mbps respectively. 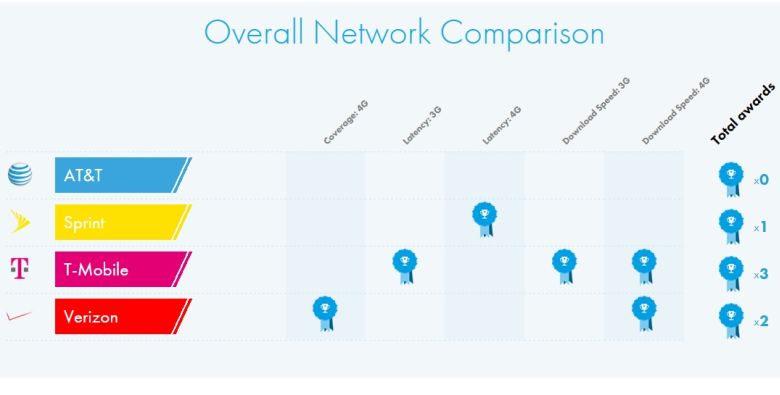 But T-Mobile managed to take the 3G velocity crown much more comfortably, also triumphing in the 3G latency duel against its three sluggish rivals. Verizon scored a consolation victory in 4G coverage, though AT&T followed close behind, and the “Uncarrier” continues to surge at an alarming pace.

Finally, Sprint was the surprise winner of the 4G latency battle, with AT&T incapable of taking home a single title. At the end of the day however, mobile users stateside might be more interested to hear their 9.9Mbps average 4G speed across major service providers falls “well short” of the global 13.5 average.

That suggests T-Mobile, Verizon, Sprint and AT&T should probably end their childish publicity wars, and focus on regaining their joint technology edge. In other words, we want more innovation, less competition.