This development may put the FCC’s meeting with T-Mobile in a new light — and perhaps the meetings with AT&T and Comcast as well. After YouTube took first spat against T-Mobile’s Binge On program that zero-rated end users’ costs for access to 480p video. That’s so long as video providers ask to be on the program, which is free to participate in.

YouTube was and is not a partner in the program and the company is claiming that its video is being “throttled” down to 480p. T-Mobile responded with a different term, “downgraded,” which supposedly conforms with net neutrality.

The Electronic Frontier Foundation is apparently having none of it: it completed streaming video and video download tests on a phone with Binge On enabled and it found that T-Mobile was throttling all such activity down to about 1.5Mbps. That includes HTML5 streaming and direct downloads to your device.

That means streaming video at resolutions greater than 480p will still only have that small amount of bandwidth to work with, making for a start-and-stop viewing experience.

Fine print on the T-Mobile site does not make this clear. 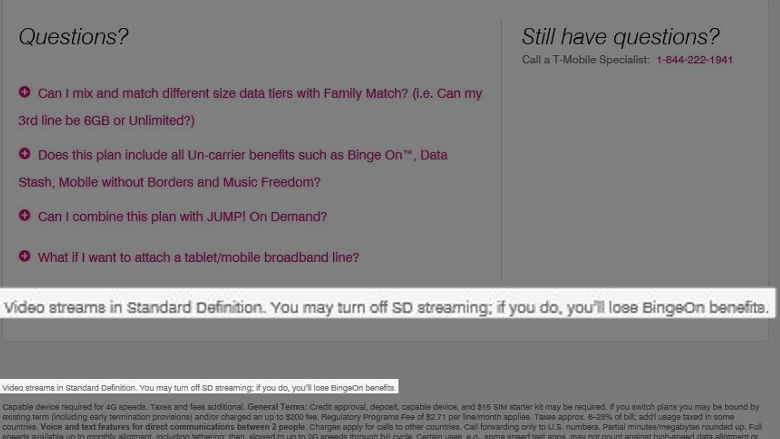 Furthermore, the EFF found that T-Mobile has not attempted to “optimize” the actual content of the video nor has it “downgraded” traffic priority for video. It’s just throttling the speed down to 1.5Mbps. And for Binge On customers who have to opt out of it, the carrier is charging you for throttled video from a video provider that hasn’t signed up for Binge On. That practice would go against the FCC’s Open Internet Order.