Price hikes, data rollover caps, and the dark side of T-Mobile’s new plans

T-Mobile price hikes and news of a cap on rollover data are starting to paint the Uncarrier 10 announcements in a newly negative light.

Yesterday T-Mobile had its Uncarrier 10 event, where the carrier announced its latest developments: the introduction of free-to-stream Binge On video data, and a doubling of data allotment for some of its most popular accounts. At the time, we had a few concerns about Binge On, specifically in regards to how it threatens to downgrade video quality through reduced bandwidth and resolution, but you could always opt-out if you didn’t care for it. What wasn’t immediately clear, though, were some of the downsides to that double-data offer, including some price bumps.

The Simple Choice plans T-Mobile has now are becoming Simple Choice Amped, starting November 15. New users will be able to chose from these options, all of which include the aforementioned double data: instead of the 1GB, 3GB, 5GB, or unlimited of existing Simple Choice offerings, those tiers rise to 2GB, 6GB, 10GB, and unlimited for Amped. 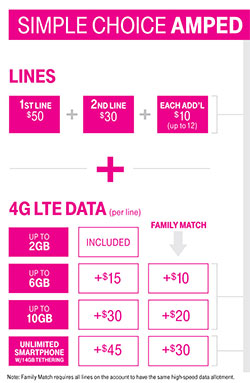 As it turns out, that extra data isn’t always free. Compared to current Simple Choice plans, the 2GB, 6GB, and 10GB plans on Amped will run subscribers the same price, $5 more, and $10 more a month, respectively. And while you can’t very well double “unlimited” data (though there was technically a 23GB ceiling before throttling), T-Mobile is still cranking up the price, raising it $15 from $80 to $95 a month.

“OK,” you say, “but you pay more to get more, right?” Well, kind of. There’s also a way these new offerings end up giving you less than you had before.

If you elect to take advantage of Binge On, T-Mobile’s going to cripple your roll-over data. With Data Stash, you used to be able to bank unused data for a year, consuming it when you needed it. While there was previously no limit on how much data you could roll over in such a manner, Binge On users will see their Data Stash limited to 20GB max. You’ll still get to use the data you previously saved, but you’ll never be able to store more than 20GB going forward.

Users who want to keep their no-limit Data Stash need to text “DATAROLL” to 6255 before the middle of next month. If you do so, you’ll still be able to take advantage of the low-bandwidth video optimization services of Binge On, but all data consumed will still count against your plan.