Samsung has done it again: they’ve managed to release a product that will find a home on every major carrier in the US, and many around the world. And not only will it be available widely, but the carriers will have little to no say in how the device looks (save for some added bloatware): all Galaxy Note II’s will have, at most, some carrier branding on the back cover, and that’s it.

The Note II is the successor to the category-defining original Note, which went on to be quite a popular device. It seems that people want a huge screen, even if that means that one-handed usability isn’t exactly possible. Not only that, but Samsung is on to something with their S-Pen “stylus reincarnation”; the Note II doubles the amount of stylus-specific feature over its predecessor and in this review, we’re going to determine whether in 2012 stylus input can make you more productive.

We should also mention that we recently reviewed the international Galaxy Note II (and gave it an impressive 9/10). The specs, save for changes to the radio, are nearly identical to our T-Mobile tester. This review will cover the Note II’s performance over T-Mobile, and will also aim to provide you with additional thoughts on the device, should you be considering one.

The Note II’s specs sheet reminds us of the Galaxy S III, only it’s much better. The Note II is powered by the Exynos 4412 quad-core CPU with a 1.6GHz clock speed in each core, and is backed up by 2GB of RAM. It comes with 16, 32, or 64GB of storage, and offers a microSD slot for expansion. Its display is 5.55″ and is 1280×720 resolution, making for a DPI of around 264 (compared to 305 DPI on the Galaxy S III). This time Samsung went with an RGB sub-pixel configuration for its Super AMOLED HD panel. The camera on the rear takes photos at 8MP and video at 1080p, while the front-facing camera is a 1.9MP shooter. The Note II ships with Android 4.1.1 and is powered by a huge 3100mAh battery. 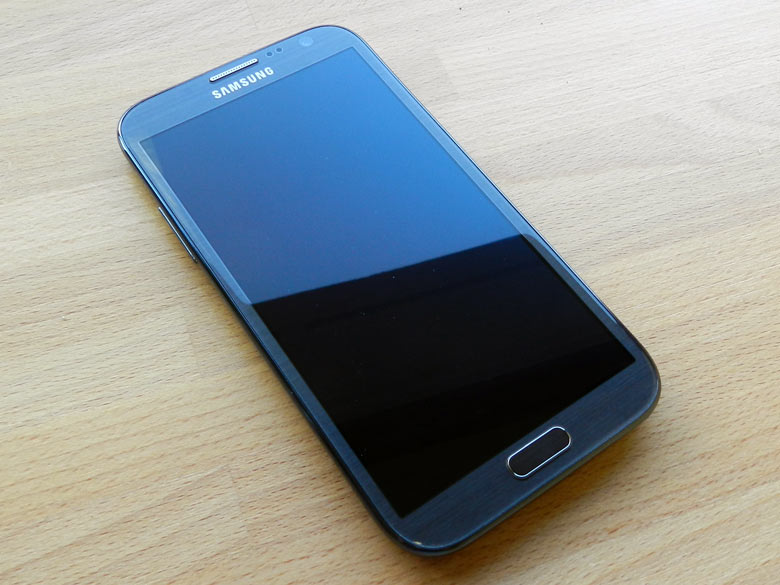 Our T-Mobile tester came in Graphite Gray, which is build from the same hyperglaze coating as the Galaxy S III. That means that while the device feels smooth in-hand, it’s also super-prone to fingerprints and is also not exactly scratch-resistant. 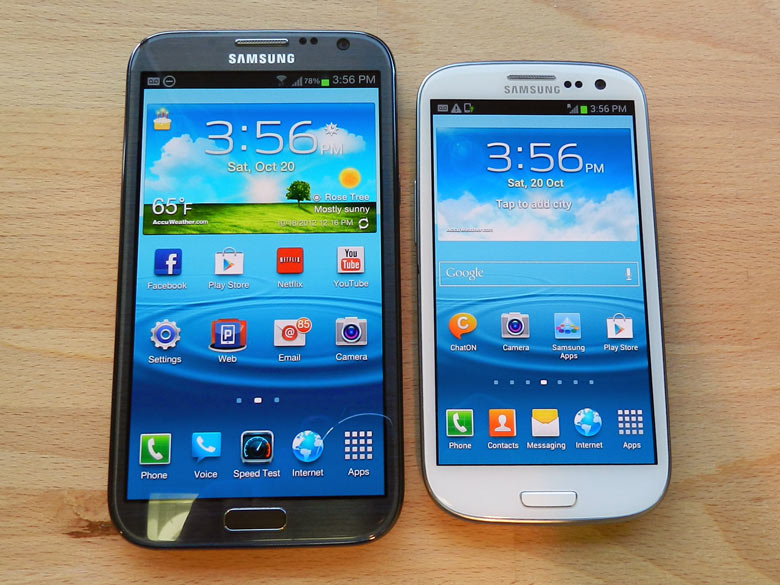 Speaking of the Galaxy S III, here’s a family portrait with the Note II. Samsung is clearly borrowing design language from the S III by bringing forth the dedicated home button, the rounded edges, and heck, they even used the same earpiece! If it wasn’t for the S-Pen, the Note II is just a bigger (and faster) Galaxy S III. 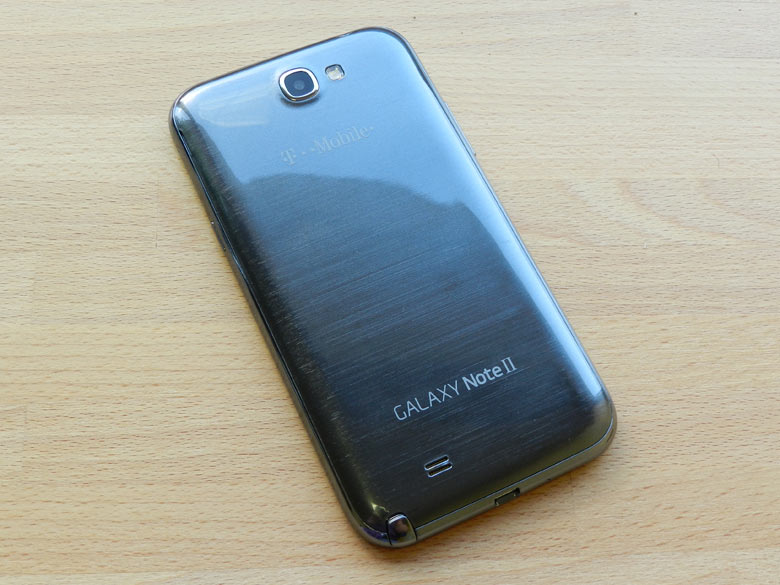 Turning over to the back we can see the faux brushed-metal look of the battery backing, which, like the Galaxy S III, is a bit thin and flimsy. 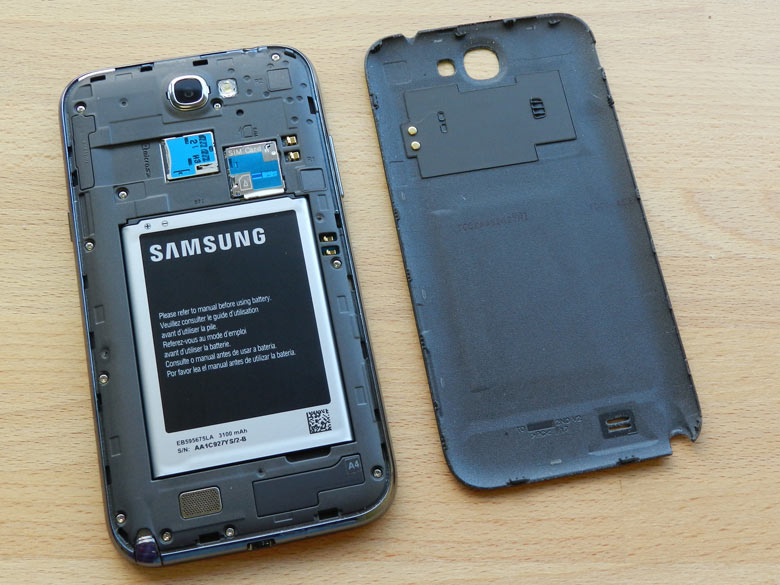 Removing the battery cover we see the 3100mAh battery, the microSIM  slot, and the microSD bay. The NFC on the Note II is not in the battery like it is on the Galaxy S III; instead, it’s on the back cover as you can see around the gold contacts. 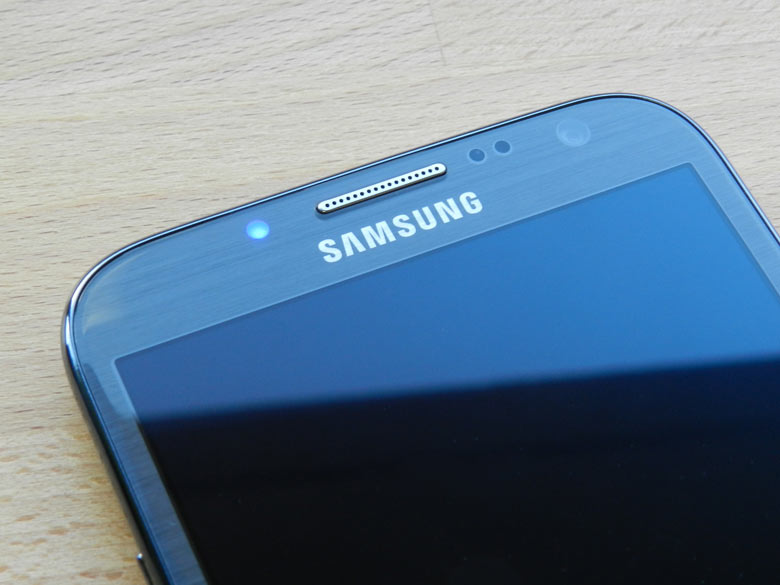 Like the Galaxy S III, we get an LED notification light that can blink with a variety of colors depending on what app is trying to alert you. Check out LightFlow to get more control over the color of the light. When it’s not blinking, the LED beacon is invisible.

Speaking of disappearing when not active, the back and menu buttons that surround the home button also disappear when not illuminated, just like the Galaxy S III. For the Note II, Samsung has made the home button a bit larger and more symmetrical. 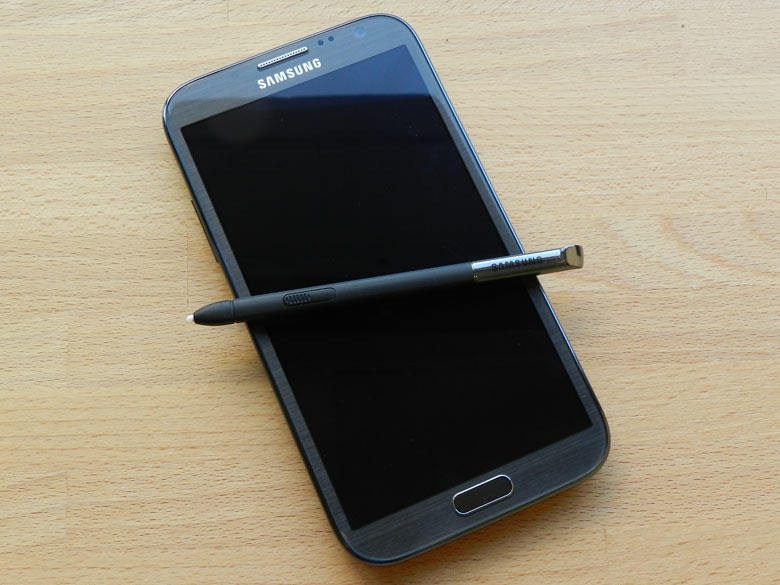 And how about that S-Pen? It’s now a bit thicker than the older S-Pen, plus Samsung claims that the level of friction when writing on the screen has been increased. 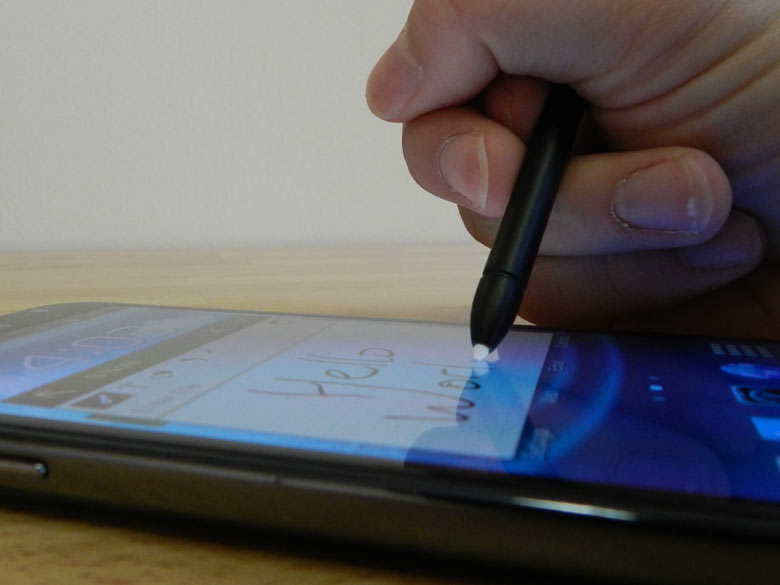 And while we were happy about the increase in thickness of the S-Pen (since hey, shouldn’t it feel like a real writing instrument?), we didn’t sense any big change with the level of friction. Writing on the Galaxy Note II’s screen still feels like, well, moving a piece of plastic across a glass screen. In fact, this is one of our main gripes about the concept of the S-Pen: until we can replicate the feel of pen-and-paper friction, writing on a capacitive touch screen with a plastic pen is just not going to feel very natural. 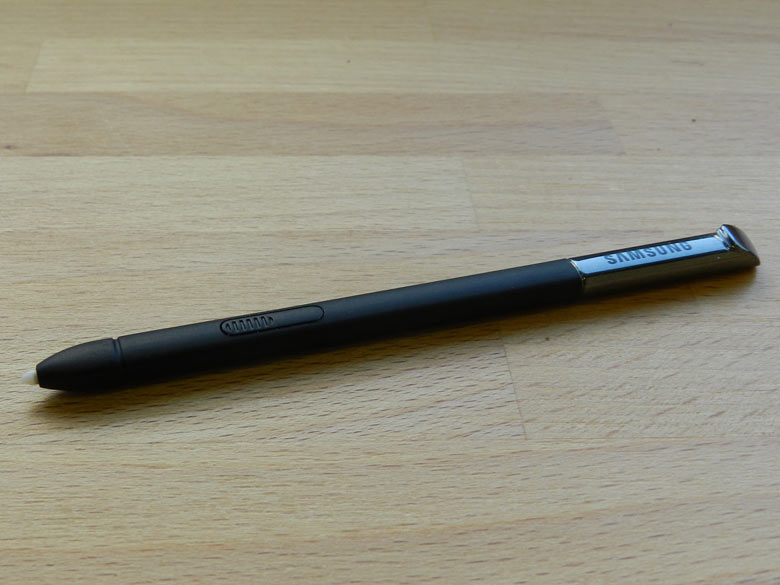 The pen itself has a button on it, but as was the case with the original Note, it’s not easy to feel for. In fact, finding the S-Pen’s button often requires you to stop what you are doing and glance down at the plastic instrument. Which is too bad, because there are a lot of cool functions to be had with a press of the S-Pen button, which we’ll describe later in this review, and having to fish for the button slows you down. 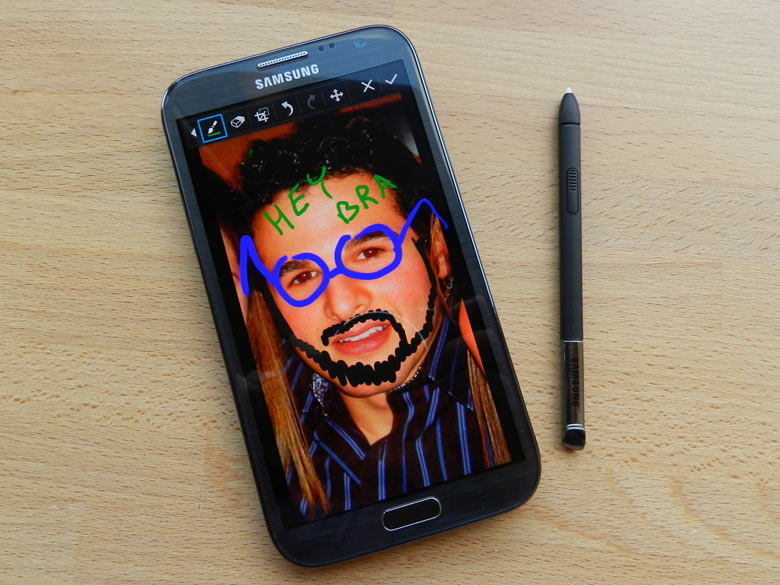 And whether or not you find yourself being more productive with a stylus on an Android phone, you sure will have more fun in your leisure if you like to doodle. Samsung claims that the Note II can detect over 1,000 levels of pressure with the S-Pen. While there is definitely varying levels of pressure sensitivity, Samsung’s figure didn’t seem to equate with reality.

Whereas the S-Pen on the first Note had limited functionality, Samsung has added a handful of pretty interesting features to make stylus input actually useful on the Note II. Here’s a look at the coolest ones. 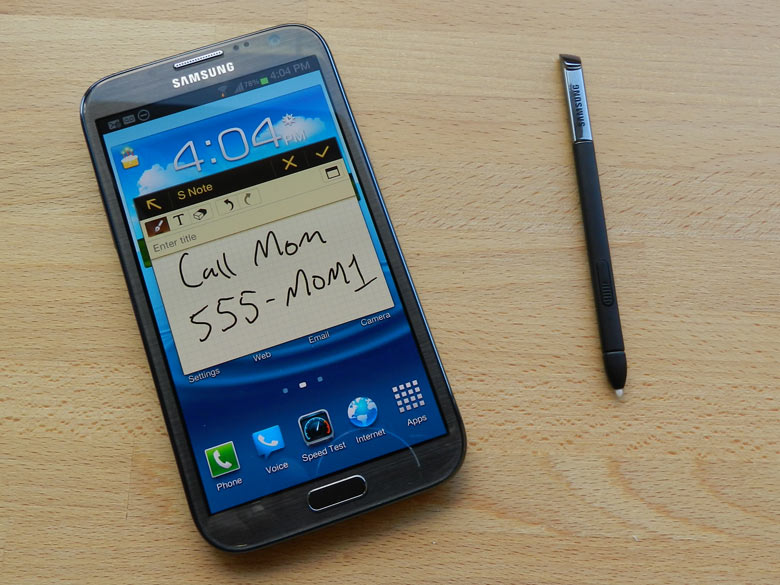 Pop-up note: from any screen you can press the S-Pen button and double tap on the display, and up comes an always-on-top note window that can be moved around to any part of the screen. This is great for jotting down a phone number of just doing a little doodle. We wish pop-up note was resizable, as it’s easy to quickly run out of space. If you do run out of space, pressing the maximize button gives you a full screen note. 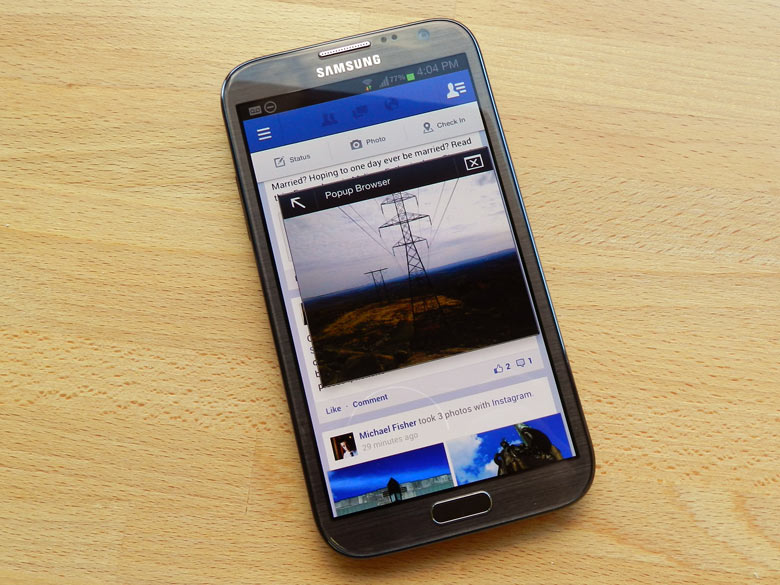 Screen-cropping: The original Note allowed you to take a screenshot by pressing the S-Pen button and doing a tap-and-hold on any screen, which was nice, and now with the Note II, you can use a similar function to take captures of select parts of the screen. While this is a neat feature in theory, we never found ourselves using it…well, except to brag to friends about the impressive benchmark scores that we achieved on the Note II.

Airview: This is another feature that, in theory, seems great, but in practice, isn’t especially useful. With Airview, you can hover over emails, calendar entries, or even hidden web menus to get a tooltip-like preview of the contents within. The hover function has a strange two second or so delay, making it frustrating to use at times unless you get the timing just right. 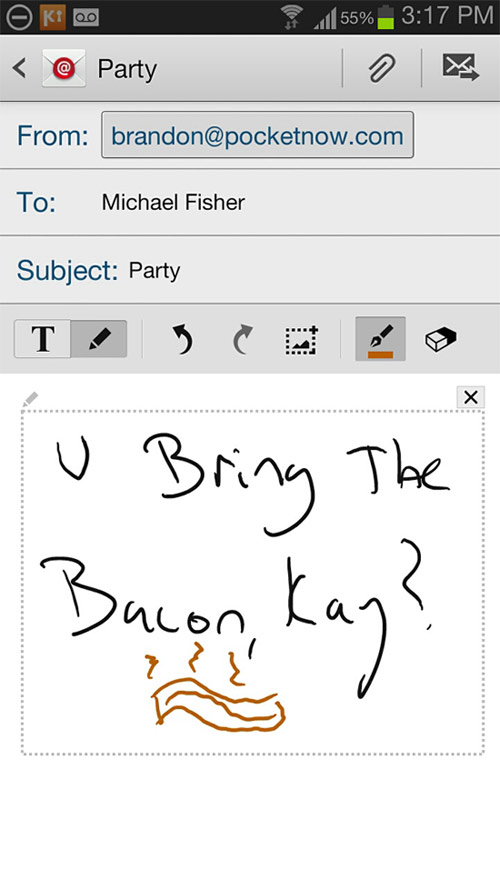 Write into an email or on the calendar: When you’re composing a new email, you have the option of writing a message directly into the email. The resulting window that pops up is small, but it’s fun to write out a quick note, which is then converted into an image and attached to the email. Doing this is not exactly faster than typing a message, but again, it’s a lot of fun. 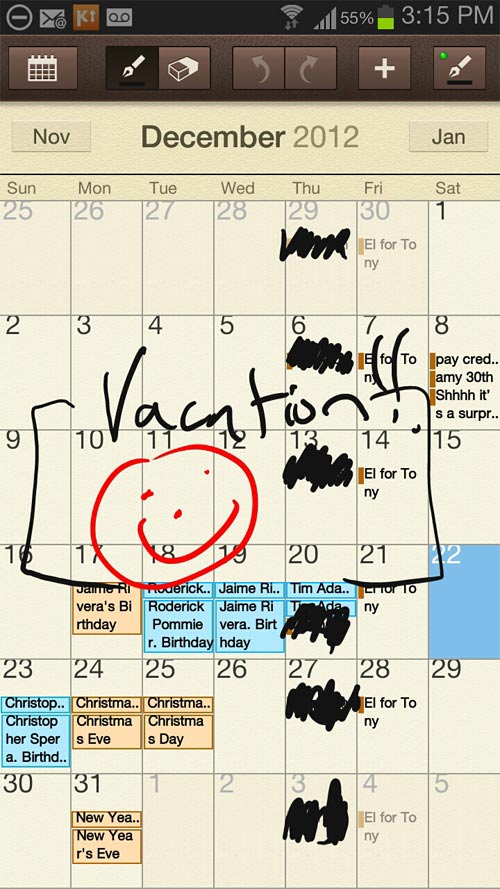 Then, if you’re using Samsung’s S-Planner calendar, you can write directly onto your calendar if you’re using it in portrait orientation. Once again this feature won’t exactly make you more productive, but it’s interesting nonetheless. 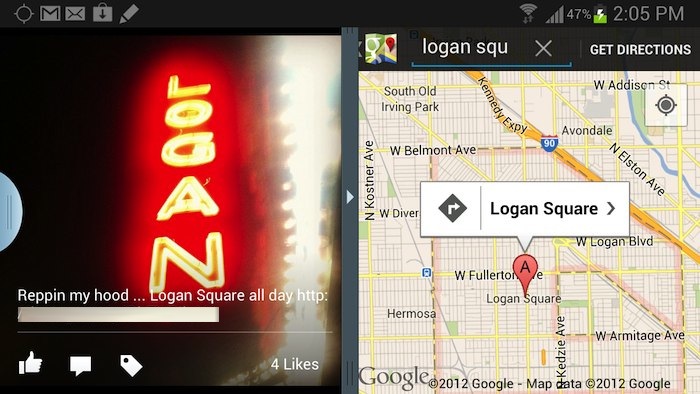 Split screen: Our international Note II tester was pushed a software update recently that allowed it to do this awesome multi-screen view that makes it possible to run two apps simultaneously. At the time of this writing, that feature was not available on the T-Mobile Galaxy Note II, though we assume that it’ll show up in a future software update.

You can take a look at a large handful of test shots capture with the international Note II, but in summary, the camera performance is great, and it’s just as good as it is on the Galaxy S III.

The Galaxy Note II is running with a quad-core Exynos running at 1.6GHz per core and 2GB of RAM. And it’s fast. Well, most of the time. There are times where UI-lag rears its ugly head, but that’s rare. Browsing the web, launching apps, flipping through the app tray, or zooming into a high resolution photo feels fast. Here’s a look at how the Galaxy Note II does with benchmarks. Shown in parenthesis are scores from the quad-core Galaxy S III:

The Note II is a device you want to use a lot: movies, games, the web, and just about everything else looks fantastic on such a large display. Fortunately, it can keep up with even the most heavy use case scenarios. Specifically, under heavy use, the Note II can run for a day (even if you have an extended night out) without needing to charge. It’s rare to say this but the Note II is a device that doesn’t require you to worry about how much juice you have left. Just use it! 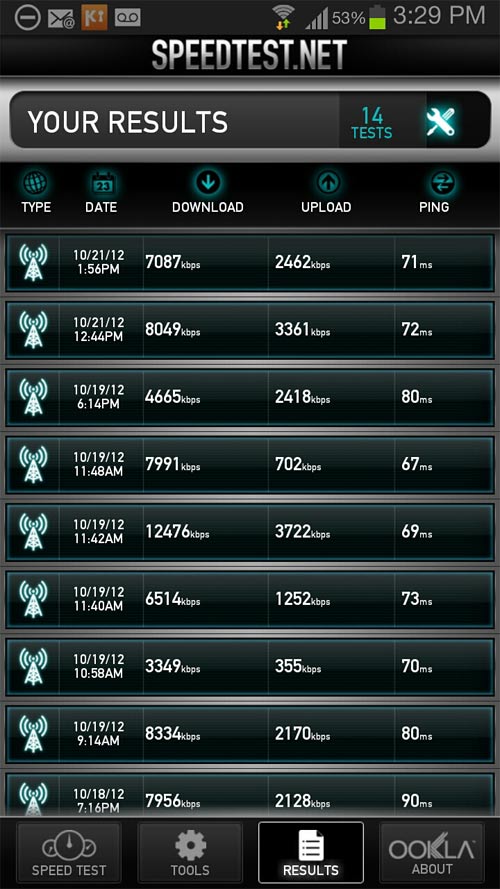 T-Mobile has yet to roll out its LTE network, so you’re left with using their HSPA+ network, which in theory, can provide speeds up to 42mbps. In our testing, we got wildly inconsistent data results over T-Mobile, with speeds ranging from 2mbps to a maximum of over 12mbps. Compared to LTE from the other three carriers, this is far slower (and less consistent). Also, despite T-Mobile’s claims of having improved their network, we experienced EDGE and even GPRS data speeds at times while testing the T-Mobile Note II in a highly populated suburb of Philadelphia (it’s not as if I’m in the middle of nowhere!). Not only that, but our signal strength was half that of another phone running on another carrier, in the same spot.

The Galaxy Note II is available for $369 with a two year contract on T-Mobile. Yup, that’s pricey, when other carriers are charging $70 less. It’s available in Titanium Gray or Marble White. Hint: the white hides fingerprints better!

The Galaxy Note II on T-Mobile is a beautiful monster. It’s got an incredible screen, it has plenty of power, and the S-Pen functionality, while offering no real boost in productivity for those of us that like to do work on the go, has been greatly improved over the first generation Note. It is our opinion that you have to make a tradeoff. Sure, you have a phone with the biggest screen in the land – but you surrender the ability to use the phone with a single hand.

Also, a great smartphone likes this deserves the best possible internet speeds. So unless you live in an area with outstanding T-Mobile service, consider getting the Note II on AT&T, Verizon, or even Sprint, where you’ll get better coverage and a better shot at LTE. 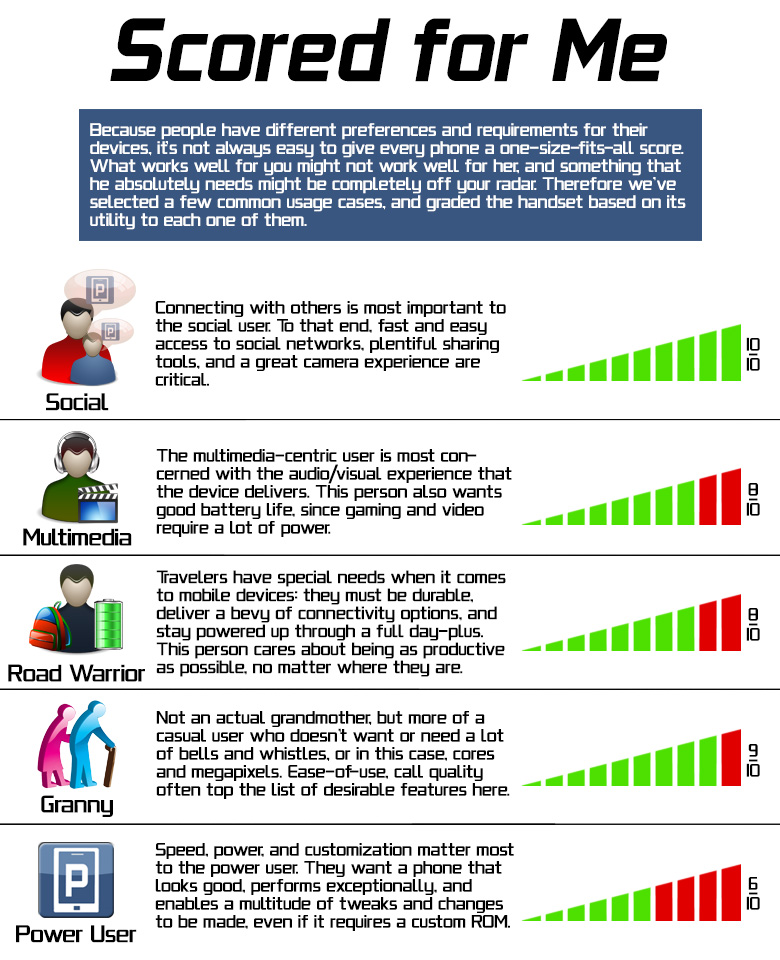 I’ve been using the Mi TV 4A Horizon Edition 43-inch TV for two weeks and here’s our review of the same.

The Mali G78-MP24 GPU is clocked at lower frequencies to distribute the load and keep devices power efficient.