When I tested T-Mobile coverage back in 2012, I found it subpar at best. But my recent return to the smallest carrier has shown me the meaning of comeback.
Published 10 February 2014, 16:35 EST

T-Mobile is the most interesting carrier in the United States.

Since John Legere came aboard as CEO in September 2012, the company has transformed from a staid, conflicted brand trying too hard to be “hip” to something legitimately compelling. T-Mobile’s “Uncarrier” push has seen the company nab the iPhone, wipe out international roaming charges, offer earlier device upgrades, eliminate early termination fees, and even pay the termination fees of those switching to its network. Combined with Legere’s unconventional antics and a bold new approach to marketing its services, these changes have succeeded in pulling the nation’s fourth-largest carrier out of the doldrums following its failed merger with AT&T: after bleeding subscribers throughout much of 2012, the company added 4.4 million customers in 2013.

That shouldn’t come as a surprise. Make consumers a compelling offer, teach them how it’s better than the competition, and price it aggressively: that’s a tried-and-true business model, and it’s one that T-Mobile is using to great effect. Just ask Joe Levi, who’s apparently surrounded by friends jumping ship for the “Uncarrier,” or Pocketnow Weekly guest Chris Larson, who explained just why he’s leaving Big Red for Little Magenta on last week’s podcast.

But the company’s success did come as a surprise to me. Because while I’ve come to respect T-Mobile US for its scrappy tactics and consumer-friendly moves, I’ve always found those merits insufficient to overcome its substantially inferior network.

So when I was offered a Sony Xperia Z1S to test drive a couple weeks ago, I jumped at the chance – mainly thanks to the T-Mobile SIM card that came along with it. I’d noticed the uptick in T-Mo subscribers in my own circles, and wanted to see how much the carrier’s Northeastern U.S. presence had grown in the 15 months since I reviewed the Lumia 810. After a week using the Z1S -and its little sibling, the Z1 Compact– I’m happy to report the answer: T-Mobile coverage has grown tremendously in New England.

This test period was timed to take advantage of some travel I’d planned for last week: in addition to my usual tromping around downtown Boston and its immediate surroundings, I also ventured on foot thorough the less-dense suburbs to neighboring Winchester, Mass. The following day, a road trip took me about an hour north to Portsmouth, NH and Kittery, ME – after which I returned my rental car to its home south of Boston and took the subway and commuter rail home. While not exactly a cross-country expedition, I felt this a reasonable cross-section of the heart of New England; it gave me a broad enough swath to compare with my experience of November 2012, which I’d called “unimpressive,” “inferior,” and “mediocre” in the aforementioned review. And my verdict for February 2014 is quite different: if saving money were my main concern, I’d switch to T-Mobile in a heartbeat. 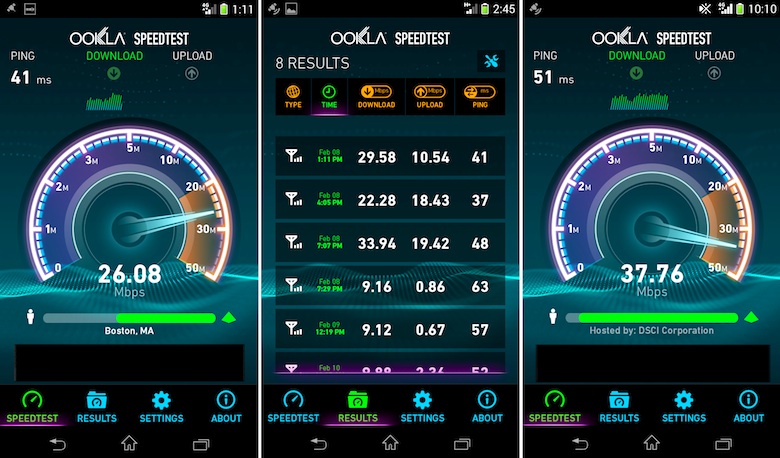 T-Mobile’s LTE network is new, so some of the numbers above are to be expected: I got download speeds in the high 20s on Verizon Wireless too when its 4G network was still fresh and clean, and I continue to see those speeds on AT&T’s network here in Boston. But to get almost 40Mbps down on a cellular connection is pretty thrilling for my particular stripe of geek, and to see it on a T-Mobile device is just nuts.

And it’s not like I had to be standing underneath a cell site to get LTE speeds; our review Z1 Compact’s “4G” indicator didn’t waver during my Cambridge-to-Winchester constitutional, easily supporting a Stitcher stream of one of my favorite podcasts while adroitly handling the occasional upstream slings of an Instagram or Facebook photo. SMSes came and went without incident. Voice calls were crisp and clear. And when my journey reached its northern end, T-Mobile’s network had no trouble loading up the satellite view in Google Maps to help me get back home. The cash, spectrum, and roaming agreements T-Mo snapped up from the botched AT&T buyout attempt have apparently been put to good use.

“This photo brought to you by T-Mobile 4G LTE.”

If you’ve noticed the handful of slower speed reports in the screencap above, you’re already aware that T-Mobile’s network, like any carrier’s, doesn’t offer LTE everywhere. True 4G signal is much harder to find in the smaller Portsmouth, NH area, for example, where T-Mobile’s “faux-G” HSPA coverage is dominant. That’s true across the border in Maine as well – an area well-covered by AT&T’s LTE network. And as T-Mobile’s native coverage resides entirely in the higher frequencies (1700 MHz-1900 MHz), in-building performance still isn’t great; even in well-covered Boston, I’ve found indoor signal harder to find than rival carriers’.

That said, the HSPA network here isn’t in bad shape either. On my trip home last night via Boston’s MBTA subway system, I was able to stream almost 30 minutes of HQ YouTube video without interruption – and that’s despite the near-constant 3G/4G switching the Z1 Compact endured as we endlessly dove underground and then re-emerged. Earlier that day, I was able to drive for an hour along a major highway while using turn-by-turn navigation and Spotify, the only hiccup coming when I passed through an EDGE-only area perhaps a mile long.

All this isn’t to say that everyone in America should be cutting their carrier loose and heading over to Big Magenta: my market is a very populous one and as always, your mileage will vary based on where you live and work. Also, I should note that I’m not leaving my personal carrier – my need for consistent LTE coverage, indoors and out, means I’ll likely be sticking with AT&T for a good while.

But T-Mobile is no longer the also-ran I considered it just a short year ago. Its aggressive value pitch is now backed up (in New England, at least) by quite a capable network, and that plus an ever-broadening handset selection has me hoping the “Uncarrier” decides to continue on its own for a while longer, instead of succumbing to the seduction of Sprint and SoftBank. It strikes me as incredibly unlikely that those entrenched players would continue T-Mobile’s ruthless attack on the old corporate model of wireless, a battle that (now that it’s backed up by a proper network) is finally worth paying close attention to.

Today’s deals come from Amazon, where we find the Razer Blade 15, Apple’s 11-inch iPad Pro with several storage options and more on sale