Are You Going to Consider Switching to BB10?

Will you be making the move to BlackBerry 10? Hear some of the reasons you might be thinking about taking the plunge.

Yesterday’s BlackBerry 10 announcement feels like the arrival of a major new player on the smartphone scene. Sure, BlackBerry’s been around this whole time, but with how RIM let BlackBerry 7 really stagnate over the past year or so, it’s been difficult to treat as a serious competitor. That all changes this week, though, and the availability of the first Z10 handsets in the UK will give smartphone shoppers a new option to consider. So, the question is: are you thinking about making the move to BlackBerry 10?

Let’s take a look at some of the positives. Just by virtue of being so different from existing platforms, both subtly and in bolder ways, BB10’s newness is going to be very attractive. The way you navigate around the operating system is slightly different from the phones we’re used to, and that novelty could prove to be very appealing.

Make no mistake, this isn’t just about being different, and BlackBerry firmly believes that all these things that make it unique add up to delivering a smoother, more productive, easier to use smartphone experience. We’ve already tried to give you some glimpse into how using BB10 feels, and in the coming weeks should be bringing you even more in-depth analysis of what BlackBerry’s managed to create. But even from what we’ve seen already BlackBerry 10 really seems to nail certain things – take notifications, for instance, with its Peek system. 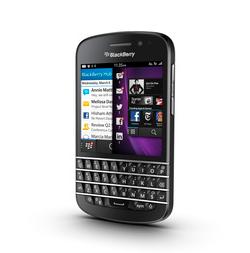 All that might make for some compelling reasons for new users to check out BlackBerry 10, but we’re talking about switching to it. That makes things a lot more complicated, and anyone who’s already bought-in to one smartphone ecosystem or another is going to face a potentially jarring experience as they have to track down all new apps, work out which accounts can and can’t be synced with the new phone, and work on recompiling your media collection or setting up new streaming subscription services.

That’s unfortunate for BlackBerry, because there are probably a lot of you out there who might be interested in trying out the new platform on a whim, but Apple, Google, and Microsoft have been doing their darnedest to make it very unappealing for established users to step away from them.

Of course, that really only applies to satisfied users, or those who have sunk a lot of cash into the app and media offerings of each; what about smartphone users who have already become disheartened with their current platforms and are just itching for the opportunity to switch?

This is where I think BlackBerry really needs to target its advertising. Especially for users who have already dabbled with multiple phones on different platforms, BlackBerry has an opportunity here to present BB10 as something that can avoid some of the problem areas where the other OSes have found themselves bogged down over the years, and by nature of the fresh start it offers, let users make a clean break and start fresh with a platform that, to paraphrase Apple, thinks different.

Things are still early for BlackBerry 10, and you’ll probably want to hear more about how the Z10 holds up to the demands of day-to-day use, or wait to see how the Q10 turns out, before making any decisions, but are any of you seriously considering gambling on BlackBerry and giving BB10 a shot?