Learn more about what surveys are currently saying about Siri when compared to Google Now and Cortana, as it seems that Apple has improved a few things

It’s been years since Apple launched Siri with the iPhone 4s, and so far the user adoption of the service has been polarizing. For some Siri is something nice to have for setting an alarm or a reminder, and for others it’s actually more important or less. That level of importance is what a recent study tried to prove, and competing services were also included.

A survey conducted claims that 81% of users feel satisfied with using Siri, which reportedly beats 68% of users claiming the same for Google Now, and 57% for Cortana. According to the study, participants were asked to try seven different requests and report on both performance in the first answer, and then on other responses with follow-up requests. Siri seems to have the highest accuracy rate when compared to its competitors, even if other surveys a few months ago claimed the opposite and giving Google Now supremacy.

Now to clarify, the reason we say “claim” is because we’re having a hard time finding source information on the size of the sample, demographic, etc. It’s hard to predict of those seven questions asked were merely focused on the things Siri does better than competitors. 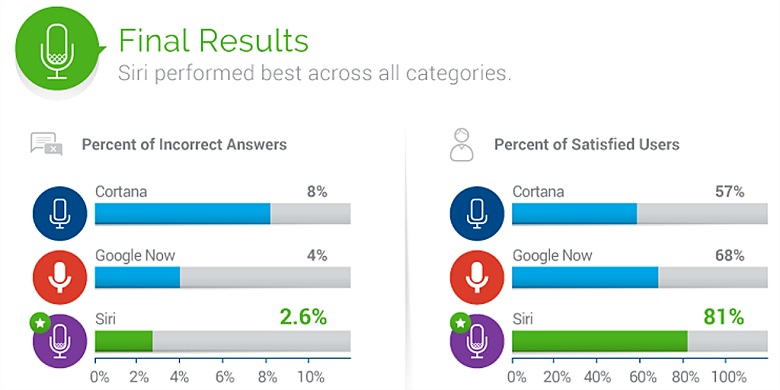