Surface Pro 3 on the road: A weekend with Microsoft’s new hybrid

Last weekend I left everything behind and took only the Surface Pro 3 on the road. I discovered some advantages and disadvantages of the new hybrid.

Traveling can be a harrowing experience. Traveling with a child, even more so. Traveling with a child while testing a new device can be a disaster waiting to happen. That’s the situation I found myself in this past weekend. Full disclosure – I wasn’t traveling very far nor for very long, and I was with my son who my wife and I call “the easy one” and I’m not completely ignorant to the ways of the Surface, so I liked my odds, but still.

Since I was traveling a few hundred miles to nearby Indianapolis for a quick two-day excursion, I decided to go all-in with the Surface Pro 3 which had arrived on my doorstep less than 24 hours earlier. This was an exciting experiment, but not without its risks since I had a Week in Review column due the following morning. Once I left the house with the Surface Pro 3 and the Macbook still sitting on my coffee table, it was Surface or bust. I was fully confident in its ability to deliver.

The nice thing about the situation was the Surface eliminated the need for any other device at all – No Macbook, no iPad, no Nexus 7. I was completely device free (except for my Lumia 920 that is) which made for a refreshing change. My backpack dropped a few hundred grams, and when I reached in there to grab a device to do anything, I was always grabbing for the same thing. You’ll have to wait a bit for the full review rebuttal, but for now I wanted to share a bit of the good and the bad that I ran into. 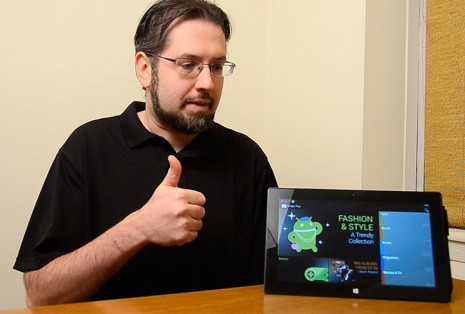 “One device to rule them all” is a great way to go. I already mentioned the backpack weight loss program that helped with packing. The other packing related benefit was two chargers – one for the phone, one for the computer. With my other arrangement I’d have to pack and plug in no less than 3 separate chargers – Nexus/Lumia, iPad, Macbook. Someday, I dream of one charger to rule them all, but for now, it is what it is. With the built in USB charging port in the Surface charger, I had exactly one outlet to find in my hotel room. I can’t even begin to describe how nice this was.

On top of that, the Surface could do anything I needed it to do. Kindle app for reading, Netflix and a USB port for movie watching (more on that later), and a web browser for everything else. Much has been said about the lack of app ecosystem on the Windows platform, and I can’t rightly argue those claims. But most of what I do (and I bet most of what you do too) can be done in a web browser just as easily (and in some cases, better) as in an app. This won’t be true for everyone, but for a short weekend away, that was the case. I’d even be willing to bet that it would suffice for a week or two on the road.

I mentioned earlier that I had some Pocketnow business to attend to while out of town and the Surface Pro 3 was definitely up to that task. This tablet, and especially the type cover was just outstanding for writing, and the side by side multitasking was perfect for what I needed. Photoshop on the Surface Pro was also great for editing graphics. The work portion of the trip was definitely covered.

The USB port was particularly nice while out and about. A portable hard drive with every Disney movie on it certainly helped fill the long hours in the car for my son. Considering the limited use of the contents of the drive, it wasn’t practical to copy over every single movie on the off chance that my son wanted to watch Cars today and Wreck it Ralph tomorrow. Most tablets wouldn’t have enough storage for all of that anyway. You might argue that a Macbook would, but tablets are better for the car in pretty much every use case. A computer/tablet simply will not win in this arena. But that is not to say there are not downsides.

Of course, the major downside in the “One device” philosophy is you only have one device. So if your son wants to watch Wreck it Ralph, you better hope you’re done with your editorial and don’t want to read. This wasn’t too much of a problem on our short trip, and realistically under most circumstances he would have his own tablet, but for the purposes of this experiment, I wanted to eliminate as much as possible. I went into it knowing I might be forced to read or watch Netflix on my phone. So perhaps “One device per person” is a wiser philosophy for daily life.

The Surface Pro is a great device with more than enough screen real estate to accomplish most tasks. Even my day job would be entirely possible on this device. But that does come with a major tradeoff. The screen and the tablet itself is simply too big and unwieldy to use one-handed. Standing in line is a great example of a time when whipping out a Nexus 7 and reading a chapter or two would be perfect. Whipping out the Surface? Not so much.

Overall, the Surface covered my work and play needs quite well. Sure there were some downsides, but the tradeoffs were insignificant compared to the advantages. Admittedly, I could use a Windows 8 refresher course or two after 7 months away, but a lot of what Windows 8 does, it does pretty well. Again, the review rebuttal will cover all that. Bottom line – great tablet, great laptop, great vacation. Win.

On today’s Pocketnow Daily, we talk about the new Google Pixel 5, Samsung’s possible 150MP camera sensor, a new iPhone 9 Plus and more

Microsoft hasn’t officially announced anything on the design overhaul yet.