Every tablet needs a kickstand like the Surface Pro 3

A Surface Pro 3 kickstand should be on every tablet produced from now on. Its utility is huge when it comes to consuming content which is what tablets do.

Up until a couple of years ago, Microsoft was not known for its high quality hardware design. Sure, if you wanted a piece of software, you knew where to go. But hardware was just something Microsoft didn’t do. There was nothing wrong with that, plenty of OEMs were happy to step up, buy a license and go, go, go. But then Microsoft decided to get into the hardware game. It aimed high.

The Surface is one of its more recent attempts at hardware and it is beautiful. The Surface RT and Surface Pro both debuted just over two years ago, and they were absolutely gorgeous machines. The metal design with great lines was top notch. The detachable keyboard covers were both very usable and well done. But one thing that really stood out (to me anyway) was the kickstand on the back of those devices. 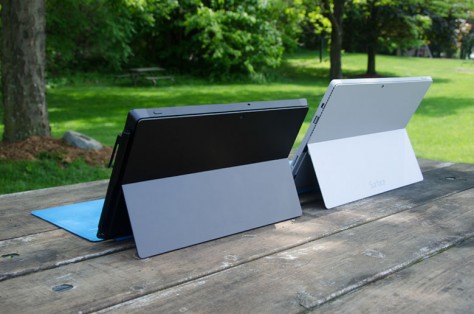 Not an attention grabber

The kickstand seems like a really boring part of a tablet to focus on, but that’s where we find ourselves today, due in no small part to Microsoft realizing that this was a very valuable utility for a tablet. Microsoft touts the Surface line of tablets as laptop replacements, and it points to the kickstand to make its point. The kickstand does indeed serve in that capacity, but it’s more than that. And that is why I think every tablet maker needs to start taking this thing very seriously.

At my home, I have children that love Netflix. They watch it when they’re playing, or not feeling well, and even sometimes at the dinner table – which they really shouldn’t do and they wouldn’t do if Daddy wasn’t also watching Netflix. But one obstacle we had to compensate for our Netflixtion (this needs to be a word) is the absolute lack of kickstands in the mobile space. Fortunately, the Surface has since made up for that, but in a house with a ridiculous amount of devices floating around, the Surface accounts for a small percentage of them.

Some covers serve to help the tablet stand up; some better than others and most not that well. The iPad has that triangle thing you can make out of the case to help it stand up, but after 7 months of use, that’s starting to wear down and flop backwards as often as it stands up. Other cases rely on a small velcro or gravity assisted flap to form a triangle of sorts and hold the tablet up. Again, that’s at best unreliable. Still other case/stand/keyboard contraptions have a trough you can lean the tablet into to hold it up, which is fine if you want a keyboard. 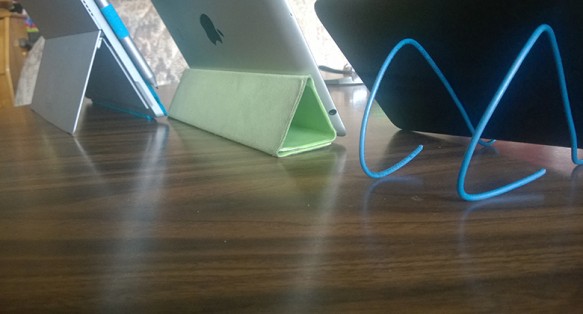 In the Doud household, I have life-hacked a solution in the form of “phone holders” – that’s the very well thought out and 100% original name that I gave to these devices. These phone holders are basically bent wire – sometimes it’s a coat hanger, sometimes it’s a broken garden fence, sometimes it’s electrical wire – that have been shaped to hold phones and small tablets at viewable angles to facilitate movie watching or reading. It’s incredibly sloppy. Why are you making me be so sloppy, OEMs?

The kickstand on the Surface is a very simple little feature that no one will ever show off at a party, but that serves such a vital function of holding the tablet up so you can look at the darn thing. What’s more, nary a household item needs to be ravaged in order to use it. It’s built right in and it helps us consume. A tablet is a content consumption device after all. You’re more likely to surf the internet than to write your thesis on a tablet. Please note, that’s not the case for everyone, I understand, but we’re playing the averages here. 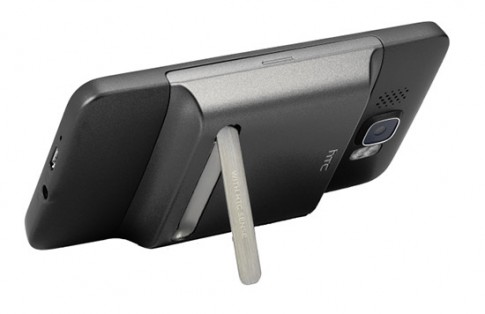 This is what other OEMs need to look at when making their tablets. I’m not going to go so far as to say every phone should have a kickstand. I am a reasonable adult after all, but on a tablet, this is a must-have. There’s really no getting around it. All the cases and stands and bent coat hangers in the world can’t compensate for a utility that would be so easy to implement on devices that are already pretty big to begin with.

Microsoft really got a lot right with its line of Surface tablets. Maybe it fell short on marketing, pricing, and operating system, but that hardware is really something to be proud of. The fact that the kickstand has gone through three iterations of design speaks volumes on Microsoft’s ability to focus on the little things and get them right. Now it’s time for other OEMs to come to the same conclusion.