Microsoft’s announcement today has had one certain effect: it’s disrupted the market. It’s made the future uncertain for the other players. And it’s introduced a new, compelling contender to freshen up the stagnant two-horse race. And if we truly are entering a “post-PC era,” then Microsoft has literally everything to lose by getting the tablet game wrong. With those kind of stakes, the next year is going to be incredibly interesting to watch – and the new Surface line will be right in the heart of it all.

After months and months of speculation, Microsoft has finally taken the wraps off its Windows 8 tablet family, which will be sold under the same “Surface” brand that used to signify large tabletop touch-computers.

The new Surface is decidedly more exciting, encompassing a duo of tablet computers which will target consumer and enterprise audiences. Each represents a huge departure for Microsoft in terms of the way it has traditionally done business. Instead of farming out the device construction to a partner like HP, Microsoft has kept manufacturing in-house, designing and building the tablets itself. Steve Ballmer put it succintly:

“It’s something new. Something different. A whole new family of computing devices from Microsoft … It embodies hardware and software working together. We control it all, we design it all, we manufacture it all ourselves.” 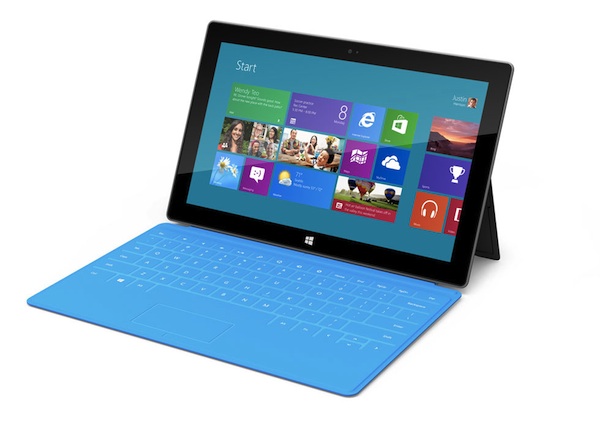 The first device to be announced, Surface for Windows RT is the more consumer-focused of the two tablets. The landscape-oriented tablet measures 9.33mm in thickness, with edges beveled at 22 degrees. The display is a 10.6-inch panel under Corning’s Gorilla Glass 2; it’s thinner than the original Gorilla Glass but just as strong, the same material that protects the Galaxy S III‘s screen. The 576-gram casing bears a distinctly industrial look, with exposed hex screws and sharp angles vaguely reminiscent of Motorola’s Q line of smartphones. The material is magnesium, with a gray PVD (physical-vapor deposition) finish, and ports for both front- and rear-facing cameras. A full-sized USB port graces the exterior, as does something we’ve advocated for a long time: a tablet-style kickstand. 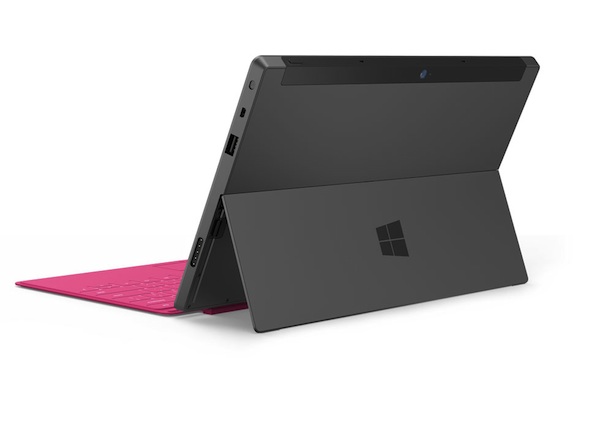 The kickstand is a feat of engineering in itself: integrated as seamlessly as possible into the device’s design, it measures only 0.7mm thin and is supported by three custom-designed hinges that give it the feel of a “high-end car door” when it’s opened and closed, according to Microsoft VP Michael Anguilo.

The integrated kickstand obviates the need for an accessory case with that feature built in, but Microsoft still developed its own flagship accessory for its new product. The  “Touch Cover” looked to my eyes like a straight ripoff of the iPad’s Smart Cover when it was first unveiled -complete with magnetic attachment- but that didn’t last long. As the above press images have no doubt spoiled the surprise, let’s just come out and say it: the 3mm-thick Surface cover integrates a multitouch keyboard into its design, along with a trackpad.

Surface for Windows RT, powered by an NVIDIA ARM processor and available in 32GB or 64GB variants, is slated to debut alongside Windows RT and will be priced to “competitive rates” with ARM tablets. 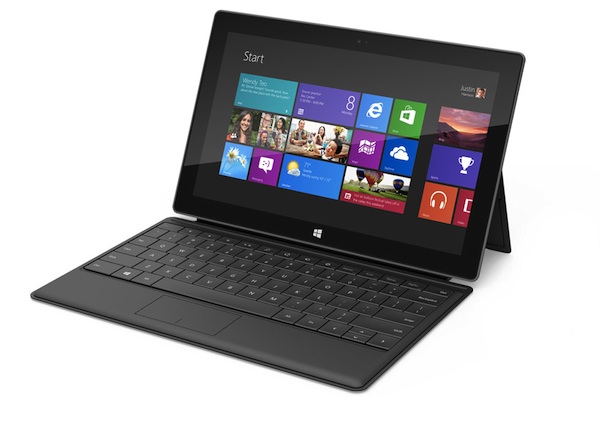 Bearing the same form factor, appearance, kickstand and some of the same accessories, the Surface Pro could easily be mistaken for its RT-based sibling at first glance. But the differences become apparent when you take a look into the filling. An Intel Ivy Bridge Core i5 processor powers the beefier Surface Pro, which also includes a higher-resolution “full-HD, optically-bonded” Clear Type display. According to Anguilo, the Pro weighs “less than 2 lbs,” measures “less than 14mm — but it’s a full PC.”

To cool that “full PC,” the Pro incorporates perimeter venting, a groove running along the rim of the device that keeps the device’s guts from overheating while simultaneously preventing a user’s hands from blocking ports- a concern on older, more-conventionally designed devices.

Microsoft also developed specialized accessories for the Pro version, including a stylus which works with an input layer on top of the display to provide high-resolution pen input, and which sticks magnetically to the side of the device when not in use. There’s also the Type Cover, a Touch Cover on steroids boasting physical keys with 1.5mm travel ability, as well as an integrated accelerometer so the Surface knows when the cover has been flipped around to the back. Many allusions were made to the “book-like” feel of the device at the announcement, and indeed this does appear to be Microsoft’s homage to the ill-fated Courier. Says Anguilo, “You can’t miss connecting this. We force you to not miss. We designed this organically like a book. We wanted it to feel just like that.”

The Surface for Windows Pro, available in 64GB or 128GB models, will launch about 90 days after its consumer-focused predecessor, with pricing stated to be “on par with Ultrabook-class PCs.” 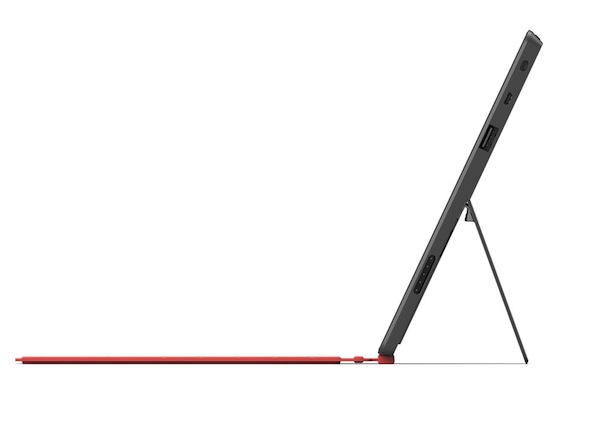 The tablet market has been in dire need of a shake-up for a long time now. For generation after generation, tablet makers have failed to bring the heat necessary to compete with Apple’s iPad. Some, like HP, have given up. Others, like Blackberry, continue to chase the dream without much success. Still others -the vast array of me-too Android tablet makers- flood the market with iteration after iteration of the same device, running an OS that looks good but which has a serious app problem. Sure, you can run almost any Android app on almost any Android tablet- but why would you want to? The vast majority of them are just scaled-up versions of the phone apps.

Only Amazon has found any kind of measurable success in the consumer tablet space with its Kindle Fire, and only then because of its massive, popular ecosystem and aggressive pricing.

So any hope for an injection of excitement into the rather static tablet market has rested on Microsoft for some time, and the company has taken its time. Indeed, Steve Ballmer addressed the delay in bringing Surface to life at the announcement, saying, “We took the time to get Surface and Windows 8 right. To do something that was really different and really special.” 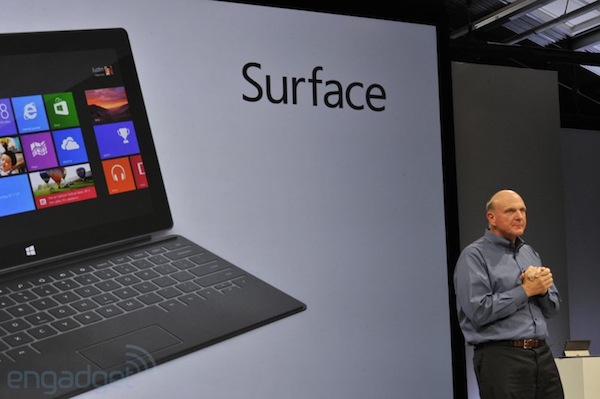 And Surface is nothing if not different and special. If Microsoft were Google, Surface would be its Nexus device. It represents a shift in Microsoft’s tactics and execution, a restatement of the importance the company places on the Windows 8 launch, and very possibly the beginning of the first major sea-change in the tablet market in some time.

That’s because Microsoft has finally started making waves in the mindshare battle with its competitors. According to a report Mashable referenced earlier today, Windows Phone development “project starts” are outpacing those for Blackberry by a four-to-one margin, a 600% jump over the last twelve months. And in June, there was one Windows Phone “project start” for every Android one. That improvement, combined with the recent upswing in Windows Phone mindshare thanks to the Nokia Lumia product line, is starting to put the mobile iteration of Windows on the map. And interest in the next generation of the “real” Windows will only rise as we approach its fall launch.

Google won’t be sitting still, of course; many expect it to launch a “Nexus tablet” of its own, probably in the form of an ASUS slate, later this month. But Google missed its chance to generate significant buzz for Android on tablets, first by shipping a half-baked Honeycomb, then by introducing the far-superior ICS without properly motivating the development community to write the apps needed to make it truly compelling. Meanwhile, Microsoft has a new platform ready to go in two flavors, and two new, well-designed devices to run them- along with all the apps they’ve been working so hard to cultivate. 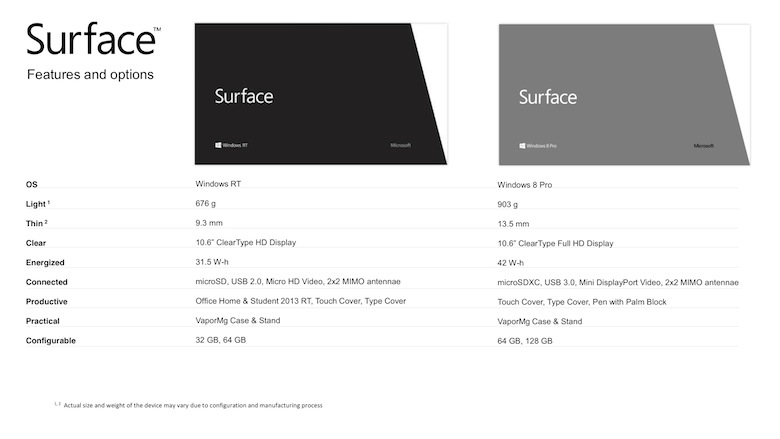 Is it a slam-dunk? Absolutely not. Windows 8 is an entirely new frontier, and Netflix and Office support do not a robust ecosystem make. Apple continues to dominate the space in most important aspects, and Google will be doing its level best to make its current and future offerings relevant. But from my perspective, Microsoft’s announcement today has had one certain effect: it’s disrupted the market. It’s made the future uncertain for the other players. And it’s introduced a new, compelling contender to freshen up the stagnant two-horse race. And if we truly are entering a “post-PC era,” then Microsoft has literally everything to lose by getting the tablet game wrong. With those kind of stakes, the next year is going to be incredibly interesting to watch – and the new Surface line will be right in the heart of it all.

Some images and Microsoft quotes via Engadget

Other Microsoft official quotes via The Verge

Four new iPad Pro models were listed in a Chinese user manual for iPadOS 13 on Apple’s website, meaning we could get an iPad Pro refresh soon

The Galaxy Tab A 8.4 is a big improvement when it comes to aesthetics, but it is still stuck on Android Pie and has a smaller battery than its predecessor.
YouTube 1.8M
Facebook 572K
Twitter 196K
Instagram 134K
RSS