Wrap up: How well does the #SurfaceBalance?

For the past week, we have been testing how well does the Surface Pro 3 balance on Instagram. Today, we report on the results. It rocks. Or does it?

Editor’s note: I use the word “surface” a lot in this article, both when referring to the device and the platform upon which it was set. Assume “no pun intended” as needed. Thank you.

The Surface Pro gets a lot of flak for being unbalanced and top heavy. It has been said that the Surface won’t stay on your knees and therefore isn’t a great portable computing device. So bad has the reputation been that Microsoft has put the tablet through 2 complete redesigns of its signature characteristic – the kickstand. Fortunately, Microsoft nailed it on the third try. For those not familiar, the original Surface had a kickstand that came out at a 22 degree angle and stood the tablet up like a laptop screen. The second generation added a second position to the kickstand to allow it to lean back more for a more stable base when on a less-than-stable surface. Finally, the Surface Pro 3 adopted what amounts to an omni-positioned kickstand which allows for up to 150 degrees of movement. Plus, the addition of a second magnetic attachment on the keyboard increased stability by a large margin. Seriously people, you can tell this makes a huge difference.

But over those iterations, the Surface got a bad rap. “That thing can’t stand up.” “It’s useless unless you’re on a table.” “Where’s my only cigarette?” Oh wait no. That’s a Stone Temple Pilot’s song. Anyway. The term “lapability” became a thing. Well, as soon as I got the Surface 3 in my possession, I could tell the game had changed. The second magnetic attachment in the type cover makes a huge difference in how stable this tablet is. Well, as you know, the next day, I headed out on a short vacation with my son and when I stopped for gas at one point, my son told me he wanted to watch a movie. Well, as luck would have it, I had an external hard drive with a bunch of movies on it. But how could I pump gas and transfer a movie to the Surface at the same time? Light bulb! Stability test. I set the Surface down on top of the car – tap, tap, tap – and I was transferring a movie just in time to swipe my credit card at the pump.

A hashtag is born

And the rest was history. I set out to see just how much stability had improved. If I found a reasonably flat surface, I put the tablet on it. Then I started looking for the weird spots. The back of a plastic cow statue for example. In every location, I tested out typing, then, once I confirmed it could be done, I snapped a photo. So, I thought it’d be fun to talk about some of the situations our Surface Pro 3 found itself in. We’ve already discussed the top of the car, and the plastic cow (a personal favorite of mine). Through experimentation, I found that the kickstand, with its friction-using hinge can not only serve its primary purpose as a kickstand, but also as a convenient hook for grabbing onto things, in the case of the “Fence and newspaper box” photo, or to jump over humps in a surface, such as the case with the cow statue. But even more awesome, the friction hinge allowed for virtually any angle to be achieved with this tablet, whether that was on the steel ramp of a large Picasso sculpture or in the cubby hole of another sculpture I found across the street. The Surface had an answer for everything. 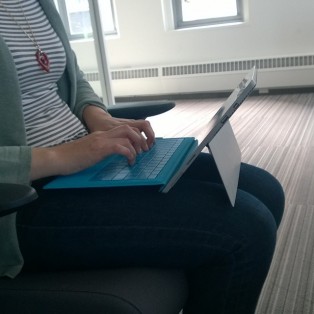 Some people got a little nervous when the photos from a boat trip hit the feeds. Surface + water = nothing good, believe me. But the nice thing about the Surface and it’s hinge was that the tablet was able to maintain a stable position whether it was on the engine cover of a boat zipping down the river (the Fox River in Island Lake, IL for those who asked) at ~18 knots or when resting comfortably on a tube at the dock. No, I did not drag the tube with the Surface behind the boat (#CrazyNotStupid). Through the week, we had the occasional commenter saying “Sure, but not on your lap!” (you know who you are) so we ended our Instagram series with the Surface actually sitting on the lap of my day job colleague (thanks again!). That was really just for demonstration purposes as I have been using the Surface for almost two weeks on the train, on my lap, with absolutely no problem.

Bottom line, Microsoft has certainly put all criticisms regarding stability to rest. It’s over people. Turn out the lights and call in the dogs.

Lapability is a word and the Surface Pro 3 has it.