Discover what getting cellular connectivity on your Microsoft tablet will run you, as Surface 2 LTE pricing leaks.

Yesterday we shared with you word that Microsoft appeared to be in the final stages of preparation for introducing the LTE-enabled version of last year’s Surface 2 tablet. Supposedly shipments of the tablet were already hitting stores, and photographic evidence existed, but it just hadn’t yet been made available. Today, not only do we finally get to see some box shots of the new hardware, but we also get the other missing piece of the Surface 2 LTE puzzle: pricing.

We’re looking at a 64GB Surface 2 here, which when purchased as the regular WiFi-only edition sells for a hair short of $550. Reportedly, the new LTE version of the tablet will fetch a $130 premium over the WiFi model, selling for more like $680. We’re guessing that there also might be an on-contract subsidized price, but that hasn’t yet been uncovered.

While the packaging is clear that this is intended for use on AT&T, the band support also looks like it would be compatible with T-Mobile – you don’t get the 1700MHz 3G, but 1900MHz is present, and both AT&T and T-Mobile’s networks take advantage of LTE band 4.

Microsoft’s addition of LTE support to its Surface lineup is a welcome one, but we wonder if having it arrive so long after the tablet’s initial launch might be a mistake. We’re also forced to consider if giving such connectivity to the Surface 2 was really the best use of Microsoft’s time, or if the Surface Pro 2 might have been a better fit. 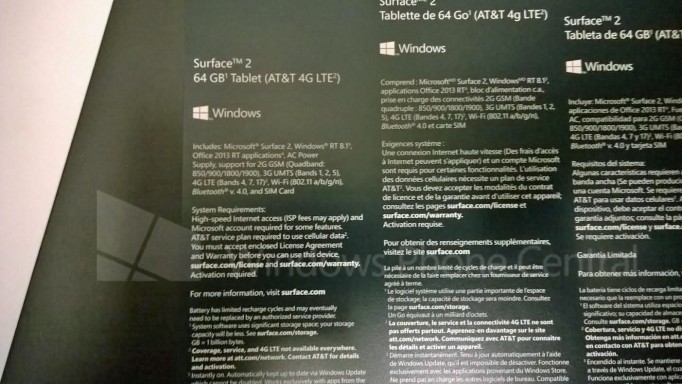