New Android devices must support Project Treble, which itself requires the abilit for those devices to run a stock version of software.

All Android devices running version 8.0 or later must be compliant with Google’s Project Treble system for streamlining updates between the end user and the individual cell carriers, device manufacturers and component makers.

This requires all devices to be able to boot into what’s called a Generic System Image — a clean build of Android based strictly off of Android Open Source Project code — to make sure that Treble compliance is achieved.

“GSI is the central piece in Treble compliance,” said Hung-ying Tyan, a Project Treble lead, at the Android Developers Summit last week. “We feel that it has a lot more potential than that.” 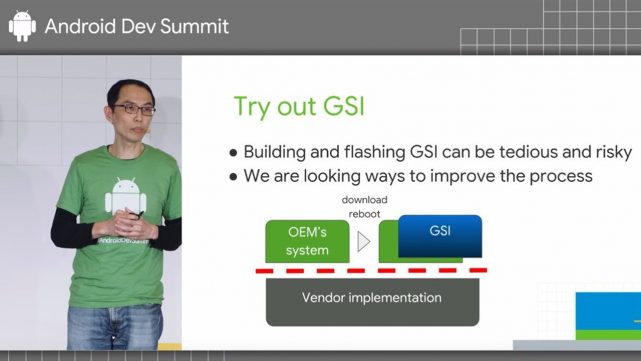 The ability to boot up stock Android on any device, no matter how heavily skinned, is not just important to OEMs and app publishers, but to custom ROM crafters, as XDA-Developers points out. However, GSI currently must be flashed via ADB or fastboot and is relatively inaccessible to phones with permanently-locked bootloaders.

So, Team Android is working on fast-tracking GSI availability so that users can test out Android Q sooner and without flashing. We should expect an announcement on the measure, Tyan said.