It’s pretty hard to get excited about a pair of 2017 flagship Android phones that need to look almost identical to their predecessors for backward Moto Mods compatibility purposes, and it sure doesn’t help that many of the Z2 specs seem to have gone unchanged from 2016.

Like the “regular” first-gen Z and roided-up Z Force, the Moto Z2 packs “only” 4GB RAM, according to pre-release performance-testing visits at both Geekbench last week and AnTuTu just yesterday.

The latter also confirms Quad HD (1440 x 2560 pixels) screen resolution, 64GB internal storage, 12MP and 5MP cameras, all of which are features shared with the original Z. Check that, the rear-facing shooter’s megapixel count is actually on the decline, but what AnTuTu neglects to list is the probable secondary 12MP lens on this new bad boy’s back.

Besides, we’re looking at aperture improvements and other subtle tweaks here anyway that should make the photography experience much better before you even consider the dual setup. 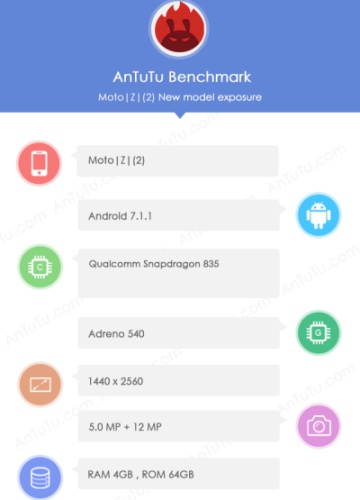 We have reason to expect a headphone jack revival too, no matter the device thinness, and it’s needless to point out how the Snapdragon 835 processor enhances the 820’s raw system speed, especially when combined with 7.1.1 Nougat software.

It remains to be seen what upgrades the Moto Z2 Force can bring to the table, aside from predictable display endurance and battery size increments. Maybe 6GB RAM and 128GB storage? Fingers crossed!