Depending on what network you’re tied to or even where you’re buying your phone from, the price of a Moto Z2 Force and the perks that come with it vary.

Deals upon deals out of the gate for the Moto Z2 Force as pre-orders begin for an August 10 ship date. The five major US carriers are selling the phone as well as Motorola and Best Buy and all of them have tricks up their sleeve in the hopes that you’ll buy this phone from them.

So, where are the best deals? Well, the mere fact that the manufacturer successfully pushed for practically universal network carriage means that you’ll likely see the best deals at your own carrier, right? Wrong. 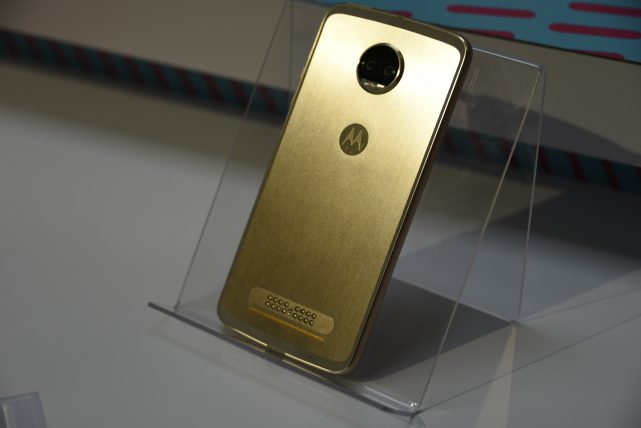 Best Buy is rewarding pre-order customers with two free Moto Mods — the JBL SoundBoost speaker and the Insta-Share Projector — for a combined $380 value package. Furthermore, it’s offering Super Black units for AT&T, Verizon and Sprint networks, with the last one also having the Fine Gold finish. In the case of the AT&T variant, it’s a pennies on the dollar discount of $25 to about $785 — $26.17 per month financed over 30 months. The Sprint variant gets cut down by almost 20 percent to about $592 — $24.66 a month for two years. You really can’t do better than the big yellow tag.

AT&T is offering just the Insta-Share Projector Mod for free with your pre-order at $809.99 or 30 monthly payments of $27. You do get an earlier shipping date, but not by much at August 9.

Sprint‘s pushing its new Flex leasing option with a BOGO free promotion if you pre-order now. Current customers must upgrade one line and add another while new customers have to start two lines up to be eligible for the offer. The monthly rate for two Moto Z2 Force devices is $33.

Users can upgrade after 12 payments or actively opt to choose a buy-to-own plan after 18 months through a lump sum or six more monthly payments for the remainder of the price. You just have to remember to call up a store or check your My Sprint account at that point.

And yes, you do get the projector for free, too.

While the Now Network’s discount comes in bill credits applied within two cycles, at T-Mobile, it’s a prepaid MasterCard worth $750 delivered within 8 weeks. Yep, even this network’s on the BOGO roll, but you don’t need new lines to get this offer. You’ll just need to be able to pay off two Moto Z2 Force phones — each costing $30 down and $30 per month for 24 months.

Funny, where did the projector go? It’s not free nor here! Hmm.

Well, US Cellular does bring that free Mod into its offerings, but you’ll pay more if you take the pre-order on an installment plan — it’s $26.12 for 30 months for a total of $783.60. Chalk up for the whole enchilada and you actually get a 7 percent discount down to $729.99.

Verizon wraps up the network rounds with a free Projector Mod and a full retail price of $756. But what would usually be $31.50 per month for 24 month gets credited down by nearly half to $15 a month for two years for a total of $360.

Finally, Motorola.com is pricing the Moto Z2 Force at $799.99 with financing through Affirm taking things down to $33.33 for 24 months before interest racks up. Oddly, you have to “unlock” a discount that takes the price down to $720 or $30 per month with the promo code “AFFIRM30” at checkout. You’re stuck with having to choose between networks (minus AT&T for some reason), but you do get that Insta-Share Projector bundled in.

All retailers are offering base spec: 4GB of RAM and 64GB of storage. We suppose advanced versions and the Lunar Grey trim will appear in other markets and, perhaps, domestically in due time.