It sure looks like Sprint is getting a special Harman/Kardon HTC One M8 version, with enhanced audio capabilities.
Published 10 April 2014, 11:04 EDT

Today, April 10, Sprint is transitioning from online-only orders for the new HTC One M8 to offering the handset in its retail locations (Update: HTC confirms it’s happening today). While that should help spur sales, there also might be another reason to start giving this Sprint carrier variant of the One M8 a little extra attention, as evidence suggests that Sprint’s got a special version of the One M8 with Harman/Kardon audio enhancements.

While @evleaks started the rumor overnight, it was on an XDA-Developers thread where the story really came together. First users attempted to confirm the news, claiming that this wasn’t going to be some future release from Sprint, but the Harman/Kardon stuff was baked-in to the One M8 already at the carrier, and Sprint has just been quiet about promoting this arrangement.

That was soon backed up by evidence from the phone itself, where a hidden “support_harman” flag in a configuration file enabled new settings for extra Harman/Kardon audio processing.

The software bit definitely seems to be in place, but we can’t say yet if the changes extend to the hardware itself – whether or not the Sprint M8 uses the same speakers as other models, or if it has special Harman/Kardon hardware to compliment the software.

In all likelihood, Sprint will come clean and announce the Harman/Kardon tie-in shortly; our guess is on tomorrow, though there may be issues we’re unaware of delaying the news. At that point, look for the feature to be remotely enabled on existing Sprint One M8 models. 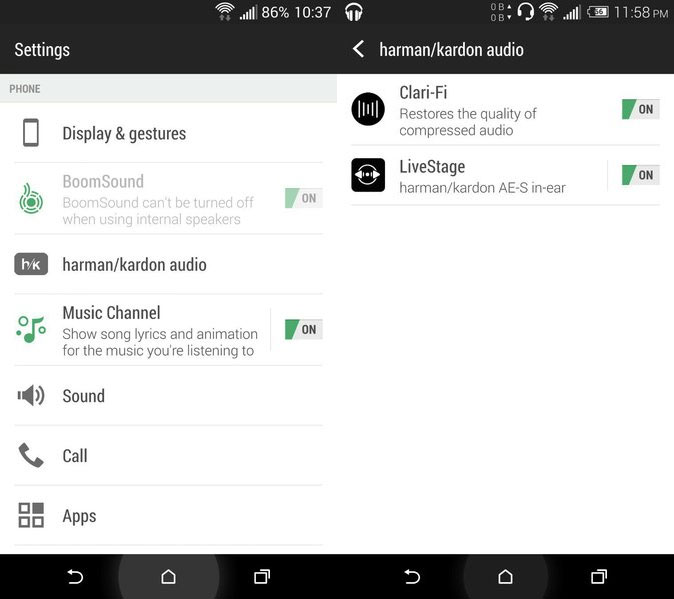