The iPad gets the ability to view multiple apps at once, including the new Split View mode.
Published 08 June 2015, 14:09 EDT

The iOS 9 feature reveals continue at WWDC 2015, and the iPad is getting a few special abilities of its own. One exciting ability that had been frequently rumored was system-level support for working with two apps at once in a dual-window multi-task mode, and that’s now confirmed, not only with split-screen mode, but with picture-in-picture support.

First things first, we get a new app switcher, letting you page through big, clear screenshots to get to the software you want. Once you’re in an app, a new system called Slide Over lets you swipe in a column view of a secondary app, giving you a quick look at other software while you keep your primary app active in the background. You can even pull down and toggle between different apps from within the Slide Over column.

But that’s just a taste compared to the main course, as Apple announces Split View for the iPad, giving users a dual-screen view that allows them to view and interact with two apps simultaneously. 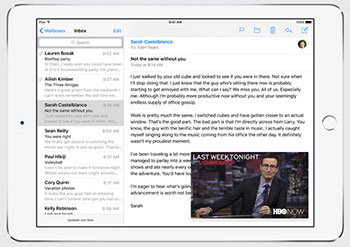 Apps can share equal screen space, or you can give more display real estate to one if you so choose. Multi-touch input will allow you to work with both at the same time, and drag-and-drop content between them.

Not every app needs so much space, though, and sometimes you want to consume content from one while working in another. For that, Apple’s bringing iOS 9 picture-in-picture support, letting you detach videos and keep them on top as you interact with other apps, or even keep their audio active in the background.

Slide Over and PiP will work with most recent iPads: the two Air and last two iPad mini models get support. Split View is more resource-intensive, and as a result it will only be supported by the iPad Air 2.

Following the rollout of iOS 14.2 for older iPhones, Apple appears to have bumped up FaceTime video call quality from 720p to 1080p.