Check out our Sony Xperia Z3 vs HTC One M8 specs comparison chart if you were wondering which of these 2014 flagships you should pick spend your dollar on.

Two of the hottest phones this year are Sony’s Xperia Z3 and HTC’s One M8. We’ve had a chance to give the latter the full Pocketnow review treatment, but the second one has just been announced – we’d still like to compare them though, so what better way to set up a Sony Xperia Z3 vs HTC One M8 throwdown than a specs comparison?

It turns out, there are a good amount of differences between the two phones. The One M8 has a more pixel-dense screen, though it loses out in the processor department in the same way that the Xperia Z2 did. The Z3 also has more RAM than the One M8, and a higher-resolution rear-facing camera, but the One M8’s high-res front-facer and IR capabilities lend it two more wins. The battery on the Z3 is considerably larger than the M8’s though, with about 500 mAh more juice available to the end user.

Check out the specs comparison chart below, the rest of our extensive (and fast-paced) IFA 2014 coverage at this handy dandy link, and tune in to our other Xperia Z3 and One M8 coverage here and here (respectively). Now the question comes down to you: which of these two phones do you prefer? Sound off in the comments section below. 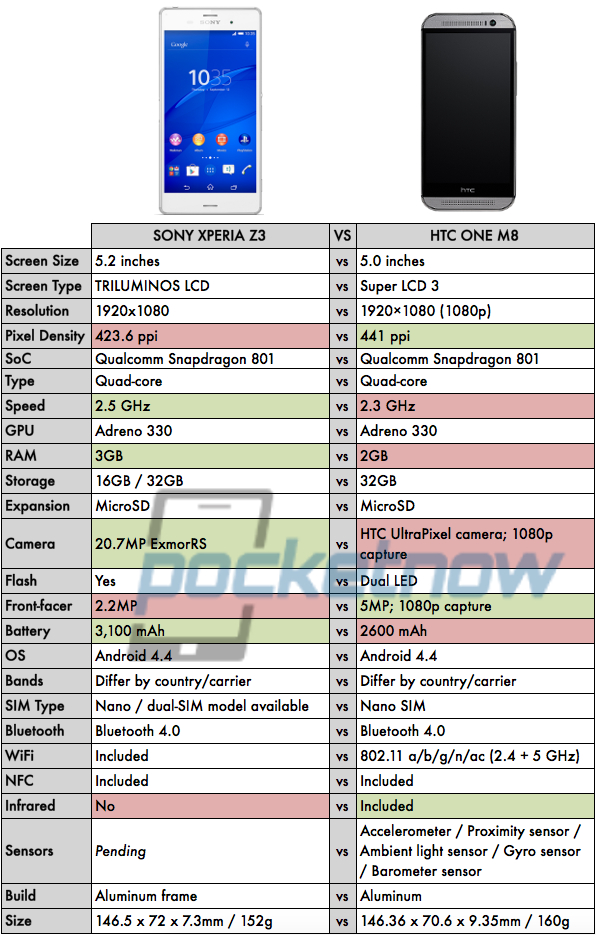