Get a glimpse at the Sony Xperia Z1s, which briefly surfaced on the company’s site prior to tomorrow’s expected launch.

About a month ago, we finally saw how rumors about an Xperia Z1 Mini would actually hit the market, with the handset launching as the Xperia Z1f. What made this phone really stand out is that unlike the majority of shrunken-down versions of flagship models, this one kept much of the same great hardware, with a Snapdragon 800 and 20.1MP camera, despite only a 4.3-inch display. It sounded fantastic, but the Z1f was to stay put in Japan. Instead, new rumors arrived suggesting that an international version would ship as the Z1s, and specifically we heard that Sony might be planning to launch the phone tomorrow. As we wait to see if that happens, we get a quick little last minute tease, as Sony accidentally places the Z1s on its website a bit early.

It’s long gone by now, but as you can see in the screenshot below, Sony briefly included the Z1s (with that fancy stylized superscript) alongside the Z1 proper and these other models. The use of an image from the Z1 to illustrate the Z1S suggests that the model’s resources may not be quite ready to go, but the proximity of this apparent slip-up to that rumored launch event sure has us wondering if we won’t see the Z1S go official by tomorrow.

It remains to be seen if a sub-4.5-inch Android will ever manage to grab headlines again, but if that day does arrive, the Xperia Z1s may just be the handset to make it happen. That is, assuming Sony’s able to properly promote the phone, which very much remains to be seen. 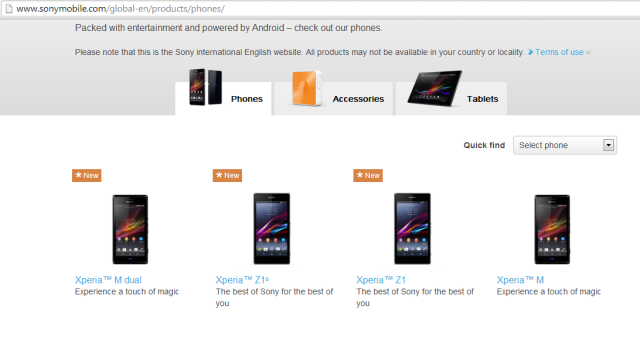