Sony Xperia XA2 may have been benchmarked with Android 8.0 and Snapdragon 630 SoC

The H4133 model number and mid-range specifications revealed at GFXBench loosely fit our expectations for an inexpensive Sony Xperia XA2.

The end of the year is near, and those who religiously follow all the new smartphone announcements and releases know exactly what that means. There’s little to no activity on the horizon, with CES and MWC then hosting legions of mobile hardware premieres in Las Vegas and Barcelona respectively during the early stages of 2018.

Sony usually likes to bring at least a few refreshed mid-range Xperias to Catalonia’s Mobile World Congress, and it’s already safe to assume the European trade fair’s next edition will be no exception.

While we’re still waiting to get some specifics on the Japanese company’s redesigned next-gen flagship, a probable Xperia XA1 Ultra sequel has been benchmarked just last week, and now a smaller version follows suit.

The H4133 model number is a tad confusing, not quite sounding like a humbler sibling for the H3213 “Avenger”, but the preliminary specs revealed at GFXBench today largely fit our expectations for a non-Ultra Sony Xperia XA2. 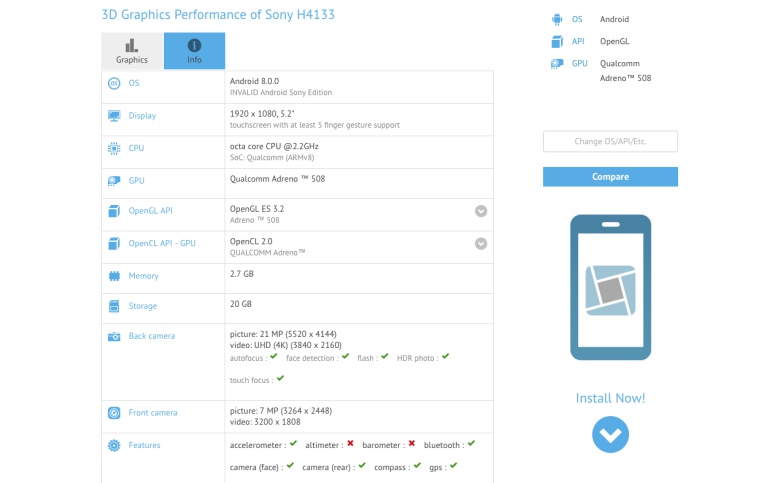 Compared to the affordable, compact and overall modest XA1, the H4133 is bigger, sharper and faster, thanks to a 5.2-inch Full HD screen and octa-core Snapdragon 630 processor. Qualcomm’s mid-end SoC is particularly interesting, as it looks to replace a MediaTek Helio P20 chip on both the presumed Xperia XA2 and XA2 Ultra.

The H4133 also stands out with Android 8.0 Oreo software in this pre-production version, as well as a 23MP rear-facing camera with 4K video recording capabilities. The single front shooter is significantly humbler, at 8MP, and we can’t get too excited about the 3GB RAM and 32GB storage either, at least until hearing some pricing info.