Streamlining is the name of the game, but can SONY still command a price premium with these specs? Here’s our full Sony Xperia X Performance review!

It’s all about creating a lineup of devices. Sony retired the Xperia Z collection of devices, last year culminating in the ambitious Z Premium with a 4K display. Sony’s mission this year? Streamline. Focus on the features which “really” matter. No more fun experiments.

However, this streamlining approach for the hardware hasn’t trimmed the price tags. Sony is still very much positioning the X line as premium offerings. Two letters lower in the alphabet, but that doesn’t mean the customer gets a price cut. We’ll be taking an in-depth look at both the X and X Performance in this write up. 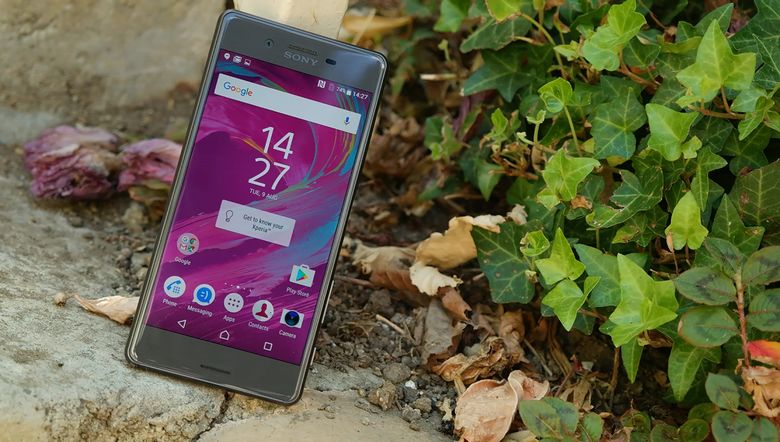 Reviewing both the Xperia X and X Performance, there’s very little difference between these two handsets. Starting off with a 5” 1080p LCD, both phones come with 3GB of RAM, start with 32GB of storage, front facing stereo speakers, and have the same 23MP rear camera and 13MP selfie shooter.

The X uses a mid-ranger Qualcomm 650 chipset with a 2,620mAh battery. The X Performance moves up to a Qualcomm 820 chipset, a 2,700mAh battery, and includes IP68 water and dust resistance. 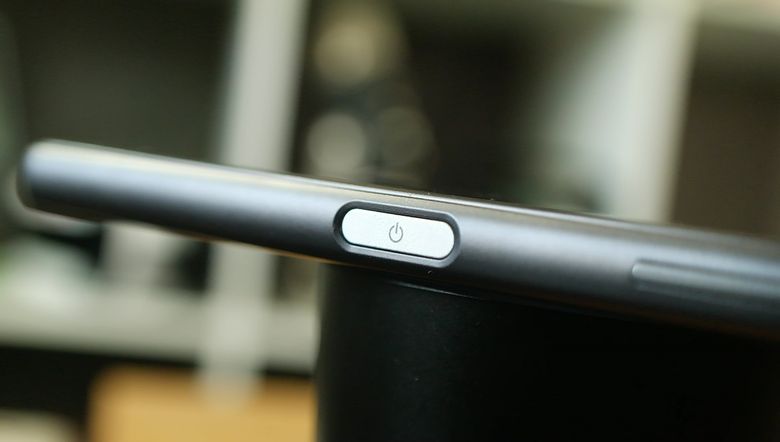 And for international Xperia owners, you’ll get a handy power button fingerprint sensor which is much improved over last year’s Z5. It’s a mid-pack performer in unlocking the phone, and easy to train, if a bit unfamiliar for the placement. The phone is just flat and thin enough, that unlocking while on a flat surface can be a bit tricky depending on what digits you’ve trained. We recommend at least a three finger strategy of right thumb, right index, and left index to cover all your bases. Sadly, buying one here in the United States means this feature will be removed. 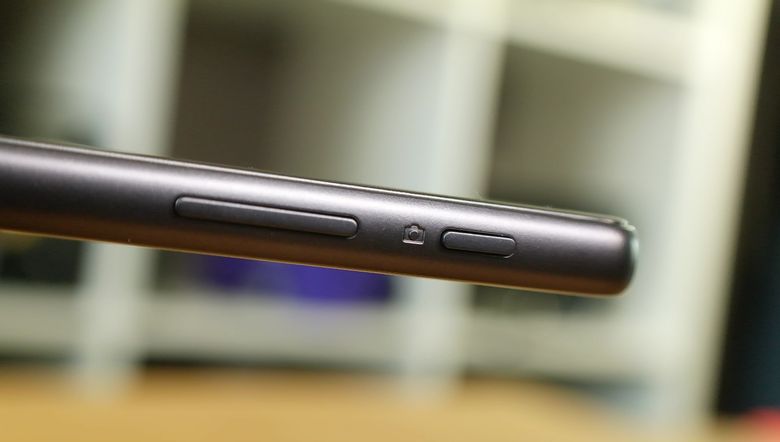 We’re always happy to see a dedicated camera button, but we’re torn on this volume rocker. It’s positioned low on the right side of the phone, and works really well as a zoom rocker for the camera, but it’s a bit of a reach for controlling system sound.

This LCD is a perfectly competent screen. 1080p resolution at this screen size is more than adequate for tackling daily tasks. It’s not the brightest or contrastiest display around though. It easily outperforms the LG G5 in short stints in sunlight, but it dims pretty quickly. Thermal throttling will be a common critique throughout this review. It can’t compete with the contrast and outdoor brightness settings found on AMOLED panel packing phones. It does get dim though, a nice benefit for folks reading at night. 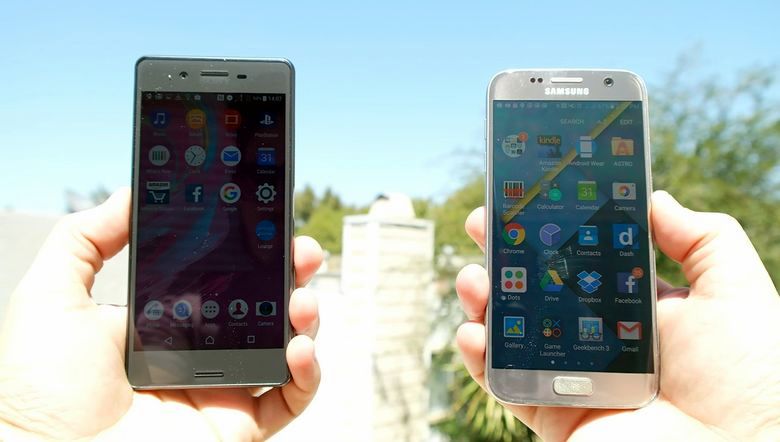 This is all respectable hardware, but for both phones, we can’t quite shake the feeling that we’re getting a nice commuter car at a luxury car price.

At least in terms of style, the Xperia X at least looks the part. 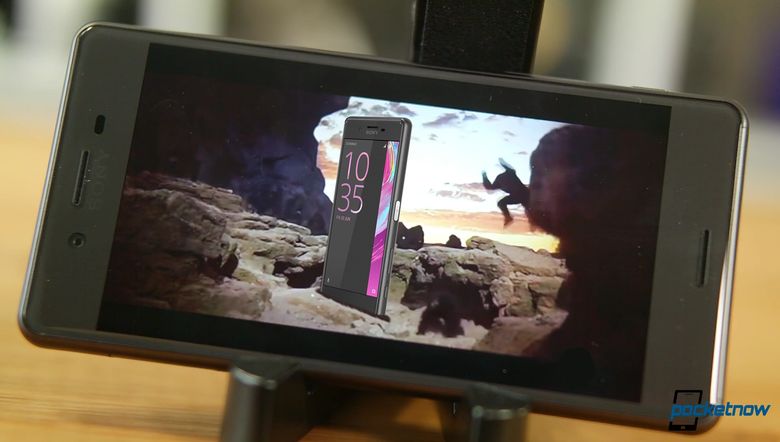 This year’s Xperia will look familiar to Sony aficionados. It’s a hard rectangular look, which more than once I’ve compared to the monolith from 2001. Sleek. Modern. It delivers a great one-hand experience, though the speaker bezels do add some extra size. This 5” screened phone is a fraction of a millimeter larger in every dimension than a 5.1” screened Galaxy S7. 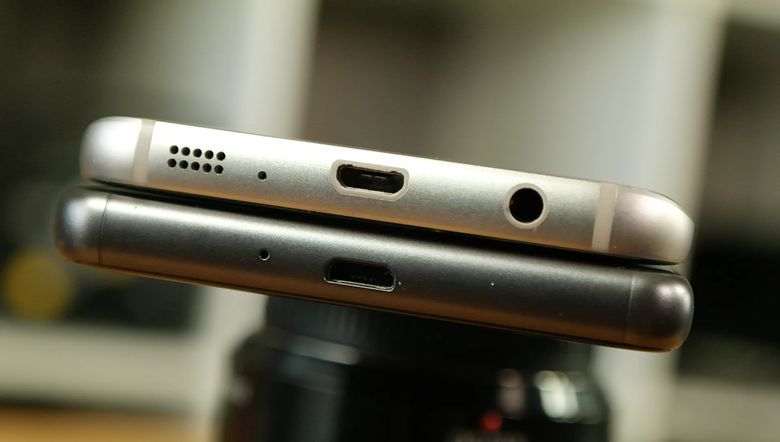 It is a sexy looking device, with its brushed metal back, but there were some slight QA issues on our X Performance review unit. These seams on the bottom edge slightly distract from an otherwise clean look, and the side panel separating from the phone body after pulling out the sim card tray. The X Performance is rated IP68 water resistant, but with this bowing on the pieces here, we couldn’t confidently test that water resistance. 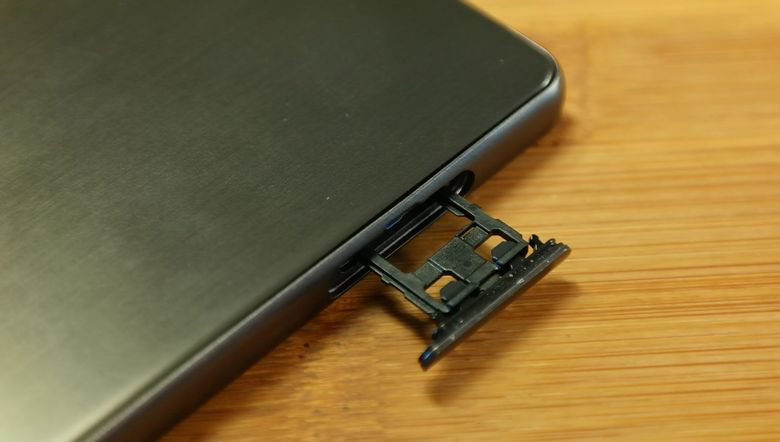 One reason why we might spend more on a phone, is to better guarantee that potential manufacturing issues are sorted.

Sony’s software offerings are also a bit conservative. Subtle tweaks throughout the user interface, like more colorful icons are eye pleasing, but the actual function well resembles a stock Android layout. The app drawer has an extra page for recommending apps, but otherwise, it’s easy to scroll through to get what you want.

There is a little un-installable bloat like AVG, but additional services like these are kept to a minimum. Sony includes a few branded apps, like a widget to walk you through setting the device up, and a Playstation 4 companion app. Sadly I still rock a PS3, so I was unable to test this feature. 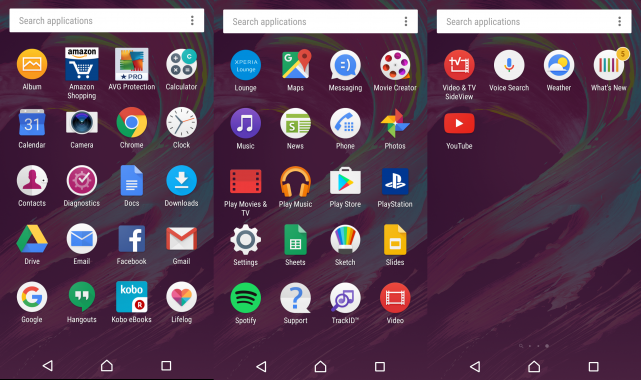 All of this software is well powered by the Qualcomm chipsets, and you’ll rarely encounter lag or jank when tackling the basics. Again, we do have some concerns over thermal throttling when taxing this hardware. 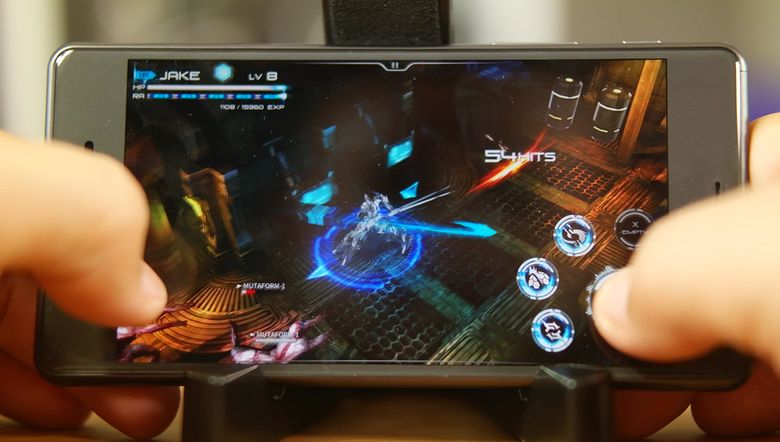 We see some frame rate drops in games like Implosion after only a single mission, and checking out benchmarking scores, it doesn’t take much to get these phones to slow down.

We have the most in-depth review of the Xperia X camera available online! Our Real Camera Review features over ten minutes of photo and video samples.

This throttling is readily noticeable when using the camera. Both phones just run warm. The X will shut off the camera after around nine minutes of video, while the X Performance extended that run time to thirteen minutes. Mind you this was under air conditioning, with the screen about half bright, and these phones max out at 1080p for video. Out in California summer heat we would start getting thermal warnings after as little as 20 seconds of video recording. 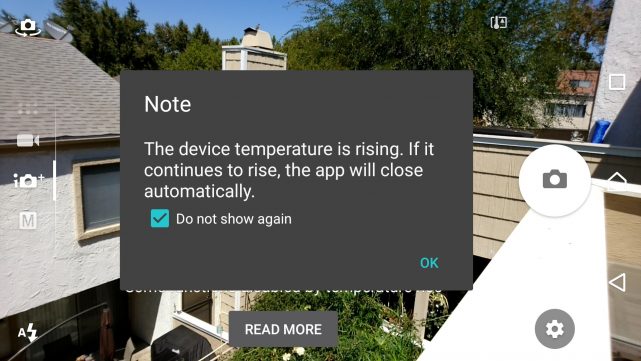 But actually using the camera will be an exercise in frustration for many folks in our audience. Sony’s disorganized collection of auto modes and hidden settings makes this one of the more unfamiliar photography solutions we’ve yet tested. 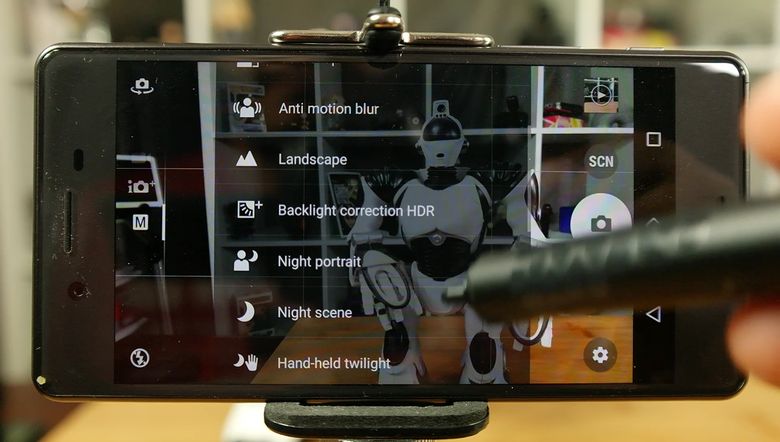 Sony boasts fast autofocus, and the action is very quick, but the object tracking is extremely unreliable. There is no hardware optical stabilization, so low light photos can be difficult to capture, and this lens is one of the fringiest and flariest we’ve seen on a premium offering. There are a ton of scene modes in the camera app, when really we could just do with a true full featured manual mode, an easier way to force an HDR shot, and for folks who like to edit, there is no RAW support in this app or in third part camera solutions. 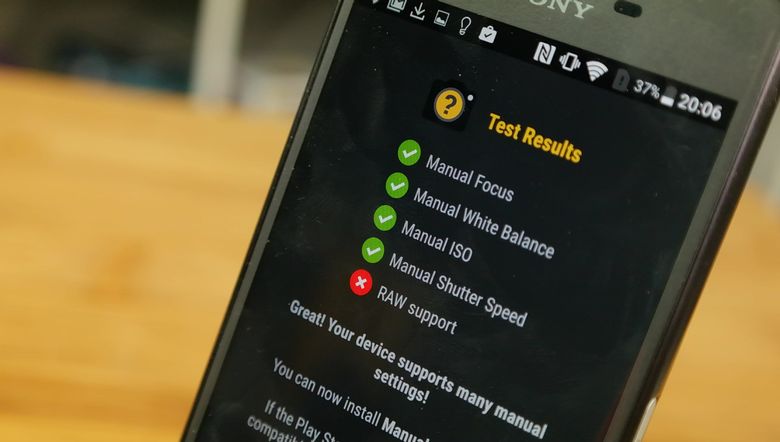 There’s also some confusion regarding the stills captured by this 23MP sensor. Out of the box, both phones default to 8MP. Sony utilizes some sophisticated image processing algorithms to down sample the images and improve final jpeg quality. It works really well, especially at night, and we’d recommend using this setting for most shooting scenarios. Sony doesn’t explain this on the phone well enough though, so it looks like you’re not really getting all of your megapixels worth when looking at the numbers.

The situation gets worse looking at video, where this phone delivers somewhat mediocre 1080p footage, with no options to move up to QHD or UHD video. Not that you’d be able to use those modes for long given the phone’s thermal issues.

It really is a shame, as this is a fantastic image sensor, and you can coax some great shots out of it, but the entire rest of the phone lets it down as a photography solution. The worst sin of all? It’s just not fun to use. 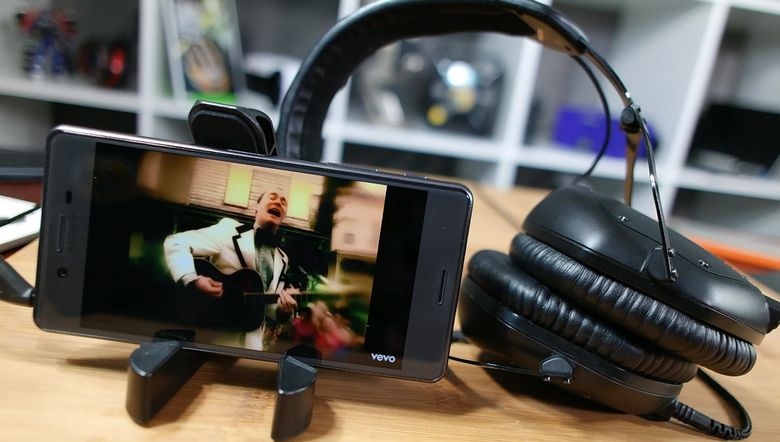 Audio is also something of a disappointment. The front facing speakers are respectable, though outclassed by phones like the Axon 7 and HTC 10. 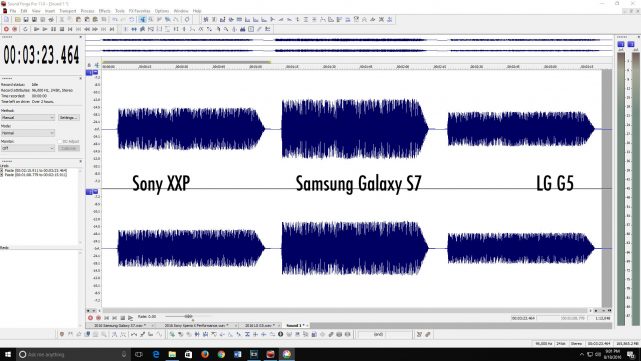 Headphone audio however is particularly sad. We’re a long way removed from the classic days of Sony standing as a multi-media juggernaut. Both Xperia’s use the same hardware. A fairly weak AMP paired up with a DAC that sports numbers almost as bad as the built in DAC on the LG G5. For a premium phone line, it has some of the poorest signal to noise and distortion performance we’ve yet tested. 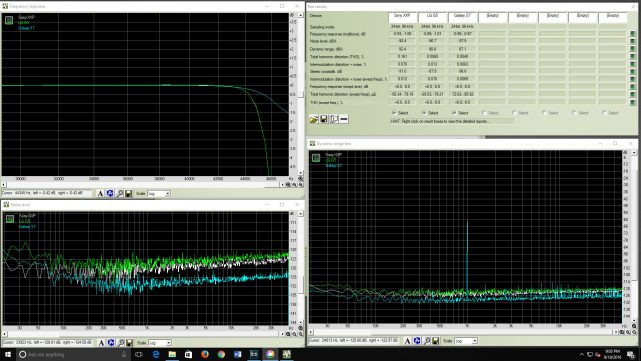 We just shouldn’t expect much from a powerful phone, which runs warm, and has a smaller than average battery. This 2700mah cell struggles to keep up with other phones in this tier. Using our media test, streaming 30 minutes of HD video over wifi at 50% brightness, the X Performance drained almost 12% of its battery, showing us even worse performance than the regular X which dropped 10%. This just might be the worst performing phone we’ve tested this year, and those numbers were mirrored during our camera review shoots. A Galaxy S7 could easily make it to mid-afternoon shooting UHD video while connected to LTE. The X Performance was dead by lunch time shooting photos and HD video while in airplane mode. 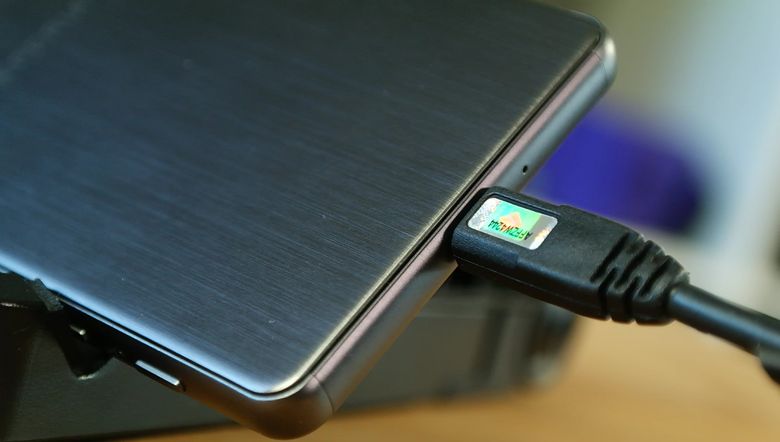 The recharge speeds are respectable, but again far from impressive. 30 minutes on a quick charger delivered a 28% recharge on the X Performance.

+ The cleanest software skin we’ve seen on a Sony

– No fingerprint sensor in the USA 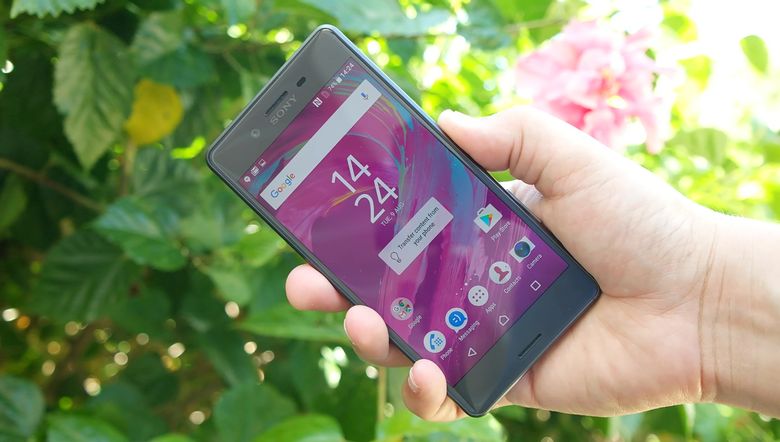 Both phones are sold unlocked through web retailers. Sony lists Amazon, B&H, Best Buy, and Reagan Wireless as primary partners. The Xperia X lists for $499.99 and the X Performance moves up to $649.99. These phones will only be compatible with GSM carriers like AT&T and T-Mobile.

I have to admit to not being able to fully partake of the Sony ecosystem, lacking a current PlayStation, but I can’t believe that’s a significant omission as it pertains to daily smartphone use.

Every brand carries fans and critics and Sony is no different, continuing a long reputation for producing stylish consumer electronics. Tony for example will likely go on to use the X Performance as either his daily driver or his back up once I send it back to him. 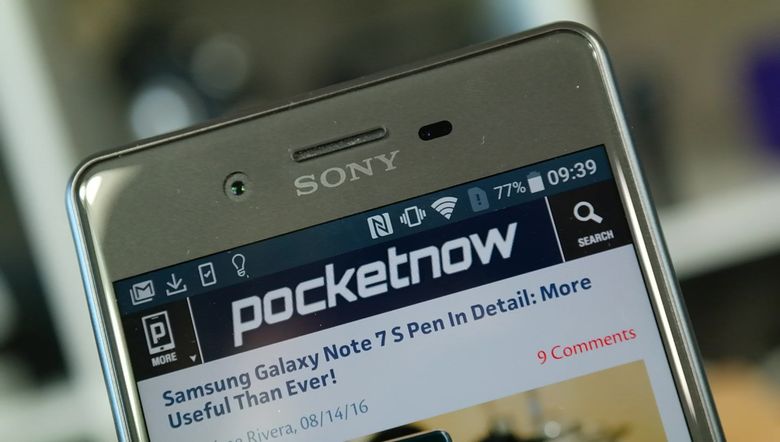 But I can’t shake the feeling that this device asks a LOT of Sony fans to keep using this brand. None of these compromises are absolute deal breakers, but we also can’t find any areas where this phone scores significant victories.

When stepping outside of the Sony fan base, I find little compelling reason for someone to switch to a Sony at this time. Unless someone loves the look and form factor of these phones, the premium pricing doesn’t seem to deliver any benefits overly similarly priced smartphones, and even the X Performance can struggle to compete against this year’s crop of mid-rangers from ZTE, Honor, OnePlus, and Alcatel. 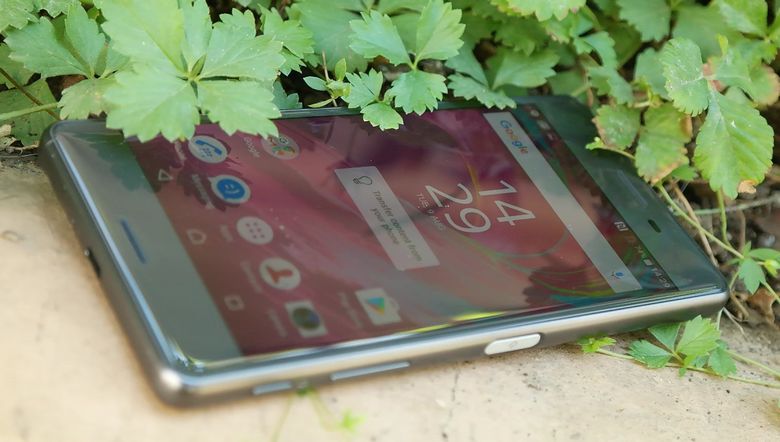 The Xperia X line represents a drastic shift in philosophy for Sony, and many transition devices were a bit rough around the edges. Look at how Samsung struggled from the Galaxy S4 to the Galaxy S6. We can only hope that future Xperia X phones are better refined and well-rounded products.

HONOR 30 will reportedly feature a 50MP custom Sony sensor and will also pack a periscope camera akin to the HUAWEI P40 Pro.

The new iPhone 9 or iPhone SE keeps showing up everywhere, and we are just waiting for…