Remember how little we knew about the Xperia XZ Premium and XZs in advance of Sony’s spotlight-stealing MWC 2017 event back in February? Whatever the Japanese OEM is thinking of unveiling at IFA Berlin late next month, it was similarly enigmatic just a few weeks ago.

But we’re starting to believe that this year’s Xperia Compact-series release hasn’t been cancelled after all. Instead, the X Compact’s sequel might get pushed up from the company’s “premium standard” family to the full-on flagship line.

Otherwise, the G8441 furiously making the rumor rounds all of a sudden would be quite a mixed bag, with pretty great specs in tow overall, but also a terribly low-res screen… by high-end 2017 standards.

AnTuTu “model exposure” information includes a state-of-the-art Qualcomm Snapdragon 835 SoC with an Adreno 540 GPU on deck, a more than respectable 4GB RAM count, decent 32GB internal storage and an Android 8.0 version that’s so new not even Google Pixels have received it yet as a public OTA update. 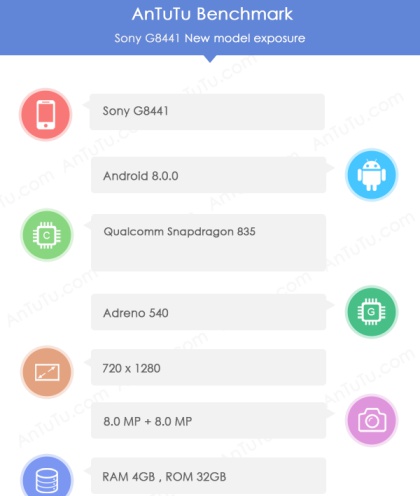 Still, what’s with the 1280 x 720 pixel count of the mysterious G8441? Well, if the display indeed measures 4.6 inches in diagonal, like the original X Compact, or maybe even less, that’s not so bad. Besides, a 1080p upscaling option could make this by far the world’s sharpest pint-sized phone without taking a major toll on battery life.

Possibly dubbed Xperia XZ1 Compact (or just XZ Compact or XZ2 Compact or even Z2 Compact), the G8441 also features a pair of 8MP cameras, according to pre-release AnTuTu data. Wait, is that two rear-facing 8MP shooters or one on the back and one for selfies? Too soon to tell, although the former makes way more sense.