Sony may be preparing to release its new quad-core Xperia tablet as soon as September.
Published 31 July 2012, 13:04 EDT

Sony’s come out with a couple Android tablets so far; it has the unusual clamshell design Tablet P, and while its Tablet S has a more traditional layout, even that model features some unusual styling with its oddly-tapered back. Sony may be about to augment its lineup with a new Xperia-branded tablet, at least according to the quite detailed leak to just surface.

A user claiming to work for Sony posted the information to the XDA-Developers forum, revealing the contents of a slideshow highlighting the model’s features. It appears that it will keep the same display as the Tablet S, but move from that model’s Tegra 2 to a quad-core Tegra 3. Sony will stick with its asymmetric design, but will drastically slim things down compared to the Tablet S.

Sony’s got a whole bunch of accessories planned for the tablet, including a very Surface-looking cover/stand with integrated keyboard.

We were just talking about work towards bringing Android support for multiple users, especially when it comes to shared devices like tablets; Sony’s on the same page, and even if native Android support is a way’s off, its Xperia tablet should arrive with a similar, simpler version early, thanks to some custom software. The “guest mode” it offers lets you present non-device-owners with a limited selection of apps from which to choose.

According to the source, Sony is planning to release the tablet in September, where it will arrive in 16GB, 32GB, and 64GB versions. The leaked slides give prices of $450, $550, and $650 for the trio, but the source also mentions a set of prices that are $50 less for each model; even still, that gives us a general idea of what to expect for pricing. 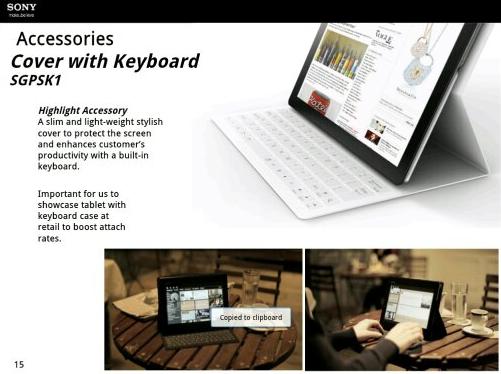 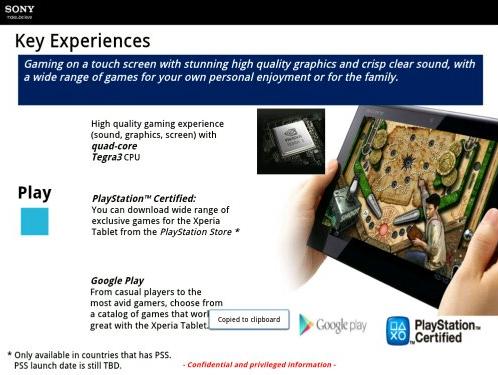 The upcoming Android TV-based streaming dongle from Google will come with a remote of its own, unlike its Chromecast predecessors.