Sony has pretty much hit rock bottom in terms of its smartphones’ unit sales numbers last year, shipping in total less Xperias around the world than Samsung’s Galaxy S8 alone will probably be able to pull off just a couple of months down the line.

Ironically, the Japanese conglomerate corporation’s mobile division somehow managed to generate a small overall 2016 profit, despite sinking revenues, with this year’s net gains expected to drop even further as sales will likely rebound a little.

It’s all detailed in a forward-looking report presented at the company’s IR (Investor Relations) Day, which also reveals there are no sequels planned for the “regular” Sony Xperia X and X Compact. The so-called “Premium Standard” line will be killed after failing to achieve its 2016 goals by a whopping 57 percent globally and nearly 70 percent outside of the OEM’s homeland. 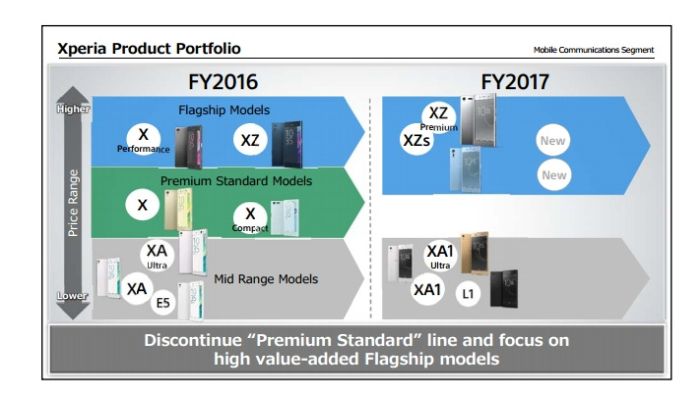 In contrast, the X Performance and XZ “flagship models” actually exceeded their domestic targets, coming much closer to matching worldwide expectations, at 88 percent. That’s part of the reason why an XZs and XZ Premium have already been released, and surprise, surprise, Sony is apparently prepping two more hero devices for introductions later this year. At IFA in September, we presume, though your guess is as good as ours when it comes to names, designs and specs.

What’s etched in stone is that high and low-end families will be better separated going forward, with the latter including products like the XA1, XA1 Ultra and L1. Sony wants to “further focus on markets” where it feels it can leverage its strengths (translation – not the US), and “differentiate products with technologies that only Sony can deliver.” Think Motion Eye cameras with super-slow motion video recording, 4K HDR displays and related, upgraded hardware of sorts.